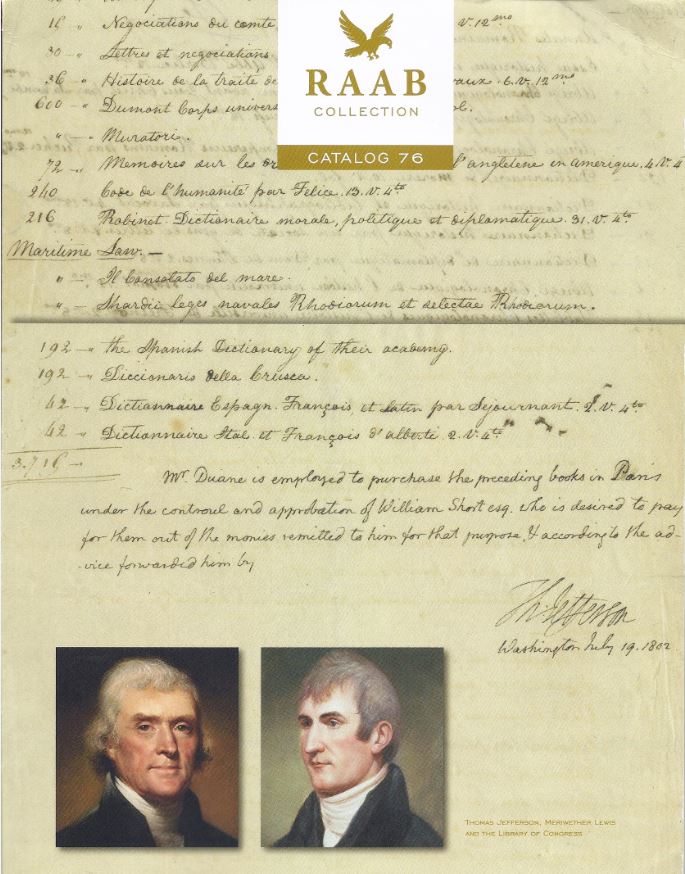 History in documents from The Raab Collection.

The Raab Collection recently issued Catalog 76. The Raab Collection specializes in important historical documents, providing detailed explanations of how they fit in with the events which surrounded them. Most are signed by very well known figures, names who need little if any introduction. Most are also American historical documents, though we always find some from Europe, primarily England and France. These are a few of those documents presented in this latest selection.

Well into his retirement years, Former President John Adams carried on a correspondence with William Tudor, son of a friend, who was writing a biography of American patriot James Otis. In one of those letters, Adams told Tudor that “Negro Slavery is an evil of Colossal magnitude and I am utterly averse to the admission of Slavery into the Missouri Territories.” It was an astonishingly blunt statement for an early American leader, as most skirted around the moral compromise with slavery that enabled the northern and southern states to form a union. Then again, as of this time (1819), Adams was still the only northerner to serve as President, the other four all having been Virginians. Ultimately, a compromise would be reached on Missouri, it being admitted to the union as a slave state (against Adams' wishes) in return for a free Maine and limitations on the future expansion of slave states. Tudor was himself an abolitionist and wrote back to Adams, inquiring whether he could reveal Adams' comments at a meeting he planned to attend. Adams was reluctant. “Why should my little twine worn out as it is to a single thread, be woven into all these political hanks and snarls?” he wrote. “Is not fair, and therefore I hope you will by no means publish my letter - besides, it would only irritate and injure the Cause.” By the date of this letter (December 1, 1819), Adams' twine had 84 years of wear on it though he would live another six years. As to his reluctance to have his words known, it may be as he said. He did not exit the most popular of presidents and perhaps he thought he would hurt the cause. Alternatively, he may have thought such controversial opinions would harm the presidential aspirations of his son, John Quincy, or just no longer wished to get into battles at his advanced age. This letter (item 4), which covers other issues as well, is offered for $14,000.

Here is another unexpected letter from a U.S. President, though in this case he was a president future rather than president past. During the Mexican War, young Philip F. Coghlan, just 17 years old, wrote General Zachary Taylor offering his services. Taylor received plenty of correspondence during the war, far more than he could personally offer responses, but Coghlan's letter must have touched a nerve. Taylor's response might surprise you. Rather than accepting the patriotic offer, Taylor expressed his appreciation but answered Coghlan this was not yet his time. Wrote Taylor, “...while I greatly admire & appreciate your patriotic feelings, which has induced you to offer your services to aid in carrying on this war, yet from long experience in military matters, I must say you are of too tender an age to undergo the hardships common to camp life; the long marches the troops here have to make under an almost tropical sun, require men of mature age & great endurance; even many such have sunk here under the fatigues & privations referred to, more than have fallen by the bullets of the Mexicans. I must therefore recommend to you not to think of taking the field as a soldier...” Not exactly a recruiting letter, but Taylor was not a typical general. This letter was written on July 7, 1847, and a little over a year later, the immensely popular general would be elected President. Item 8. $11,000.