Astronomy from Antiquariats Kuhn and Banzhaf 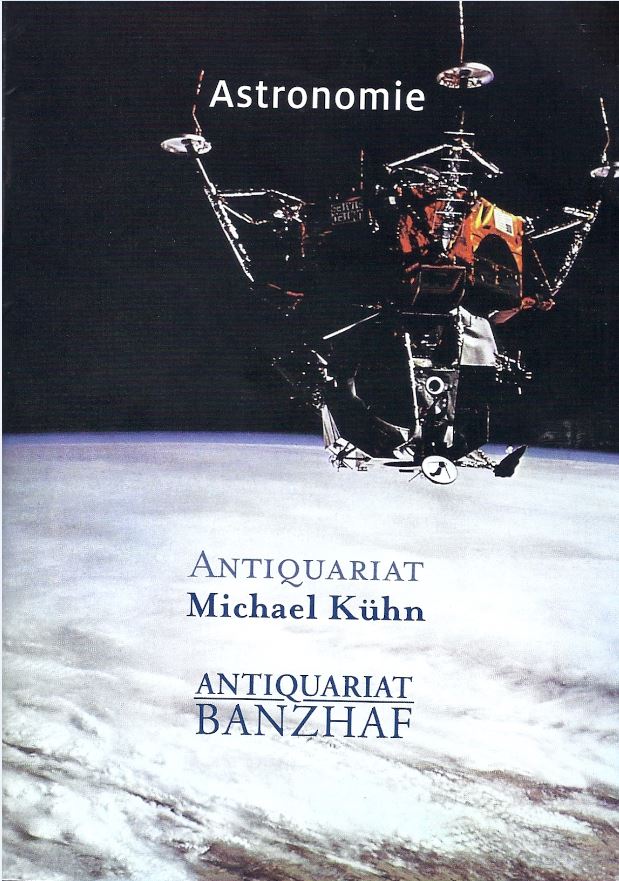 Antiquariat Michael Kuhn and Antiquariat Banzhaf have joined forces to create a catalogue of Astronomie. Translation of the title from German, we will assume, is not necessary. Descriptions of the works in it include more than enough English for those unfamiliar with German to have no trouble reading. There is much material here that is uncommon. It is unlikely you will run across it again. Descriptions, drawings, photographs from many solar eclipses can be found. There are several broadsides depicting comets from the 19th century. Then, there are numerous detailed explanations of astronomical and geophysical features. Most material is printed, but there are many manuscripts to be found, from scientists to students. With a very few exceptions, the material is old, 19th century or earlier. Here, now, are a few samples of items to be found in this catalogue of astronomie.

August Heinrich Christian Gelpke undertook an exercise in comparative geophysical anatomy in this book from 1811: Allgemeine Darstellung der Oberflächen der Weltkörper unseres Sonnengebietes. Gelpke charted the heights of mountains on the Earth, moon, Venus and Mercury. Along with providing textual descriptions of his findings and theories, Gelpke provided two large charts. They display mountains from various locations in the solar system as differently colored graph heights. It offers an easy comparison from one celestial body to another. Item 36. Priced at €1,800 (approximately US $2,426).

Speaking of charting celestial spheres, J. F. Julius Schmidt undertook a massive project during the years 1840-1874. The results of his years of work are found in item 59: Charte der Gebirge des Mondes. This is a major chart of “the mountains on the moon.” Actually, it is filled with craters. Schmidt managed to find over 33,000 of them to show. That's why it took so long to complete. The previous greatest attempts found under 8,000. Naturally, there was an enormous amount of observation and thousands of drawings before Schmidt could put it all together. If all the pieces to the chart are assembled, it is over 6 ½ feet long. €4,500 (US $6,069).

Item 33 is a description of what was evidently one of the most spectacular auroras ever witnessed. It was seen in other continents of the Northern Hemisphere as well, but this description by Johann Silberschlag comes from observations in Europe: Sendschreiben uber das am 18ten des Janners im Jahre 1770... Silberschlag was a German theologian and natural scientist, and his paper includes illustrations which provide a sense of how spectacular this display on January 18, 1770 was. €1,400 (US $1,888).

Next we hear of another of those spectacular celestial phenomena, almost a century later. On August 7, 1869, a total eclipse of the sun spread from Russia to Alaska, western Canada, the American Midwest and Northeast, concluding its journey a little way out in the Atlantic. Item 44 is a compilation of material concerning the eclipse published under the authority of the U.S. Secretary of the Navy, edited by J. H. C. Coffin: Reports of observations of the total eclipse of the sun, August 7, 1869, made by parties under the general direction of Professor J. H. C. Coffin. Coffin's party traveled to Burlington, Iowa, to observe the eclipse. While the photography was not the first of a solar eclipse, it is among the earliest, particularly for such sharp images. Item 44. €700 (US $944).

Astrophotography, if that's a real word, advanced quickly over the next few decades. Item 80 is Selection of photographs of stars, star-clusters and nebulae... by Isaac Roberts, two volumes from 1893-1899. Roberts was a pioneer in deep space photography. He had access to some of the most powerful telescopes which he would point at dim objects far in the distance and use long exposures to make their light appear much brighter. The process effectively made the telescopes more powerful in their ability to reveal what was otherwise too faint to see. The book contains 53 photographic plates in the first volume, 28 in the second. €3,800 (US $5,124).

This is an unusual item from the first manned mission to the moon: La conquete de la lune. It is a folder of exceptional photographs of the first manned moon landing on July 20, 1969. It was published the same year. Photographs include numerous lunar and sky scenes as well as of the astronauts. The folder was privately distributed by the watchmaker Omega as a Christmas gift to clients. Each of the astronauts, including those for many years on other missions, wore an Omega Speedmaster watch. Item 82. €2,500 (US $3,372).