The Sea, with and without Cannibals, from Ten Pound Island 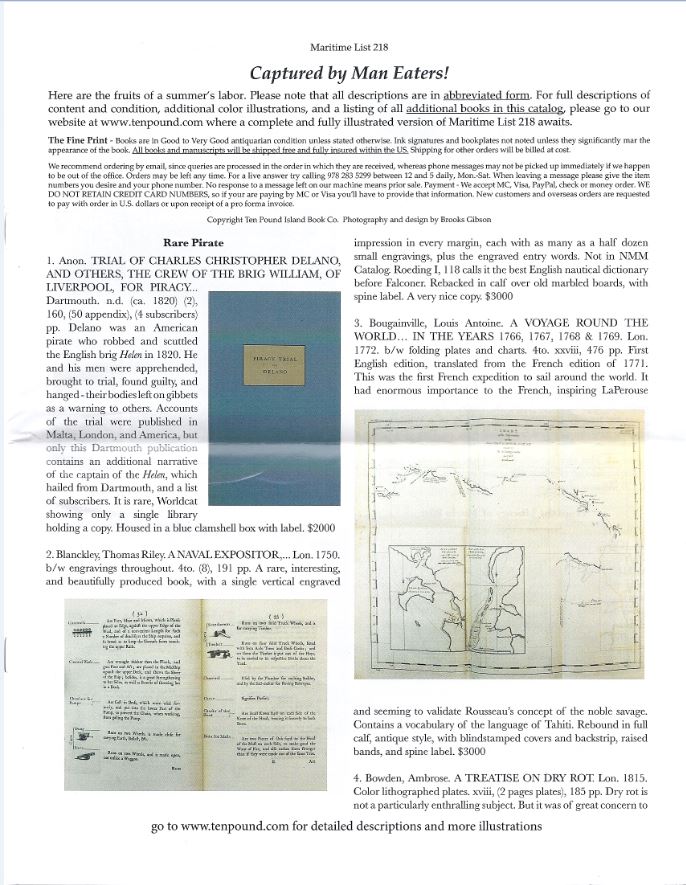 We've seen some unusual titles for catalogues, but perhaps not quite like Ten Pound Island Book Company's Maritime List 218 – Captured by Man Eaters! Is this an entire catalogue devoted to cannibalism? Is that a collectible category? It turns out that this, like Ten Pound's other catalogues, is devoted to works about the sea, not cuisine. The “Captured by Man Eaters” refers to one specific item about an unfortunate journey, though we cannot vouch for whether it was quite as extreme as the broadside implies. Either way, this is another great catalogue for those who like their books water stained, but in a different way.

We will start with the story of cannibalism. It is an undated broadside proclaiming the appearance of Ex-King of the Cannibals, Capt. A Tuttle. The Wonder of the World! We don't know where or when he was appearing, other than “To-Night at Grand Army Hall.” There are a lot of Grand Army Halls, but presuming it was one for the Grand Army of the Republic, that Civil War veterans' organization was formed in 1866. Records indicate that a Captain A. Tuttle was sailing from the west coast in the 1850s and commanded a ship that went down in 1859. The broadside states that Tuttle's ship was “sunk by a sperm whale.” It goes on to say he was “Captured by the Man Eaters on the Feji Islands. His boat's crew all devoured by them. The Captain providentially spared and crowned King, and ruled them three years.” It goes on to call Tuttle “A Hero of many battles on land and sea,” concluding, “You will never regret the time and 25 cents spent.” Is this seemingly otherwise unrecorded incredible story true? As noted before, we cannot say. We did find an 1867 copy of a Masonic newsletter which says a Capt. A. Tuttle had appeared there proclaiming himself destitute and obtaining personal contributions, along with a 15-day $15 loan from the Plymouth, Indiana, lodge. The lodge could not locate Capt. Tuttle when the time was up, and when it inquired of the New London, Connecticut, lodge was told he had been expelled two years ago and since “he has been traveling around swindling Masons.” Does this shed any light on the veracity of this story? Again, we cannot say. Item 5. Priced at $1,250.

Item 15 is what Ten Pound describes as “the primary American navigational guide, the first such book to be compiled and printed in the United States.” It is The American Coast Pilot, compiled by Capt. Lawrence Furlong and published in the seafaring town of Newburyport, Massachusetts, in 1796. This rare book provides detailed directions, distances from Boston, and information about ports all the way from Maine to Virginia. Distances and directions are also provided from Virginia to the mouth of the Mississippi. Tide tables are included. This copy was owned by Lemuel Moody, who operated the Portland observatory and prepared some early maps of coastal Maine. Moody's signature, along with many manuscript notes, including his sailing instructions from Cape Cod to Antigua, are found in this copy. $85,000.

Item 1 is an anonymous account of an American seaman gone wrong. Charles Delano was the Captain of the brig William, sailing out of Liverpool. Rather than obtaining their own cargo, Delano and his mates decided to confiscate that of another brig, the Helen. They boarded the Helen, locked up the crew below decks, stole the cargo, and sunk the ship, crew and all. At least they attempted to sink her, but the Helen floated up on the Spanish shore, the crew was saved, and the cargo located in Malta. The William was then tracked to Turkey, the pirates seized, and returned to Malta. This book tells of what happened next: Trial of Charles Christopher Delano, and Others, the Crew of the Brig William, of Liverpool, for Piracy... Delano and several others were convicted and hung for their crime. As a warning to others, their bodies were hung for an extended time from a gallows by the harbor. $2,000.