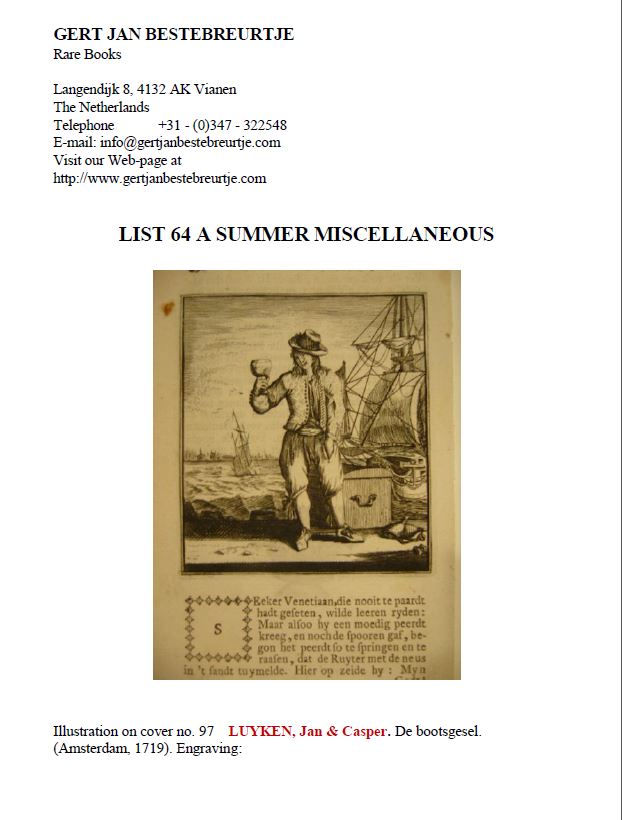 Gert Jan Bestebreurtje Rare Books has released their List 64 A Summer Miscellaneous. This was a late summer miscellaneous, and now we have moved to fall, but that's all right. These books are equally good in the fall and winter too. Here are a few items from this collection of miscellaneous books and images, mostly relating to times long ago.

This book is certainly appropriate for winter: Fram over Polhavet. Den Norske Polarfaerd 1893-1896. This is the first edition of Fridtjof Nansen's classic account of his journey to the Arctic, later translated to English under the title “Farthest North.” Nansen and Hjalmar Johansen led an expedition during the years 1893-1896 to the farthest reaches north. They hoped to reach the North Pole, not yet attained at the time. The idea was to put their ship in the Arctic ice flows, believing they would carry it over the pole. It didn't work out that way, and once they realized their direction was wrong, Nansen, Johansen, and a bunch of sled dogs took off on foot to find the pole. They were blocked by the ice before reaching their goal, but it was still the farthest north any humans had ever traveled. Their journey back was long and hard and they might not have made it but for an amazing coincidence – bumping into a British expedition in Franz Josef Land. A return route slightly off in any direction and they might never have been found. Item 116. Priced at €275 (euros, or about $362 in U.S. currency).

Here is an intriguing item, particularly for those with a connection to Munchen, or Munich as we say in English. It is a leporello of 16 original photographs of buildings in Munich, in a gilt embossed red cloth binder labeled Munchen. What is a leporello, you might say (or at least I did). A leporello is a style of binding once popular in Europe, a fold-out of indeterminate length. On this side of the Atlantic, we would more likely call it an accordion fold. It is named after the character of Don Giovanni's servant from the opera, who kept an account of his boss' female conquests in such a fold-out record. Item 8. €65 (US $85).

Item 46 is a story of glorious achievement, though later events would rub off much of its gloss: De tocht van de “Graf Zeppelin” naar Amerika, by Hugo Eckener, published in 1929. Eckener was a pilot for and supporter of Count von Zeppelin's airships, who took over the company when the Count died in 1917. This commemorates the flight he captained to America in 1928, the first intercontinental passenger flight. He followed up in 1929 with a flight around the world. Eckener's company had an exceptional record for safety, but with the takeover of the German government by the Nazis, whom Eckener opposed, his role was marginalized. Then, in 1937, there was the Hindenburg disaster which brought an end to hydrogen-filled airships. €15 (US $20).

Item 34 is An Account of the Voyages undertaken by the order of the Present Majesty for Making Discoveries in the Southern Hemisphere... This is the three-volume work by John Hawkesworth, which covered several English voyages, but is notable primarily as the official account of Captain James Cook's first voyage. Cook's official mission was to observe the transit of Venus, but his voyage is remembered more for its discoveries around Australia and islands of the South Pacific. Writing the report was turned over to Hawkesworth as Cook was quickly off again on the second of his three voyages. This copy includes 32 of the 52 charts, maps and plates. €1,500 (US $1,975).

Next up is Curry & Rice, on forty plates; or, the ingredients of social life at “our station” in India. The title is a neat play on cuisine in 19th century British India. The “forty plates” are not dinner plates, but plates depicting satirical drawings of life in India. George Francklin Atkinson provides copy and humorous caricatures of such images as a judge, colonel, race course, tiger shooting, bazaar, and such from colonial India. Published in 1860. Item 19. €695 (US $914).