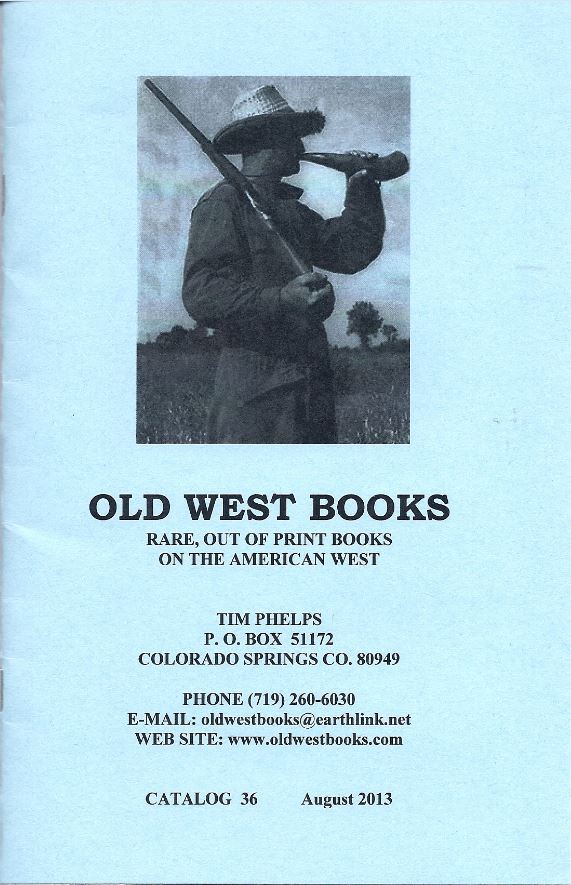 Old West Books has just released their Catalogue 36 August 2013. It is filled with material from the 19th and early 20th century. Naturally, it relates to the western half of America, which when combined with the date range, equals the “Old West.” These were mostly written by people who lived in the time and place, contemporary accounts by those who experienced the West when it was still new (which is now “old”). Their accounts are always fascinating. Here are a few of them.

Item 34 is General George Armstrong Custer's biographical account of My Life on the Plains or Personal Experiences with Indians. Of course, we all know from hindsight that Custer had some most unpleasant personal experiences with the Indians. However, at the time he published this book – 1874 – things were still, for the most part, going well. Custer was not shy about self-promotion, and wanted the world to know about his exploits fighting in Indian lands. The book may be a bit of an exaggeration, but it is entertaining and provides a good look at his years on the plains. Two years later, it all ended quite abruptly. $1,750.


While Custer was fighting the Indians John Wesley Powell was undertaking his own dangerous journey, riding the rapids down the Colorado River to explore a mostly uncharted territory. While the terminus of his journey, the Grand Canyon, had been discovered by non-natives a decade earlier, most of the river route to it was unknown. In 1869, Powell and his men set off on the Green River in Wyoming, following it to its confluence with the Colorado and on to the Grand Canyon. While he wrote a report in 1875, Powell did not get around to publishing a full account until 1895. Item 75 is a first edition of that full account, Canyons of the Colorado By J. W. Powell, PH.D, LL.D, With Many Illustrations. It was published in a small run, believed to be only 100 copies. It includes Powell's personal narrative, ten folded panoramic views of the Grand Canyon, and many other illustrations. $6,500.


Here is an account of another man who served in the West, and various other places as well: Reminiscences of Winfield Scott Hancock. Hancock was named for the long-time military commander Winfield Scott when he was born in 1824. That was a prescient naming, as he would go on to be a military leader as well, serving under Scott during the Mexican War (and during the early days of the Civil War before Scott retired). Hancock had two tours of duty interacting with the Indians in the West, in Missouri before the war, in Dakota after. Much of this book, however, focuses on his service during the Civil War, where Hancock earned great respect for his defenses at Gettysburg. After the war, he was placed in charge of military Reconstruction in New Orleans under President Andrew Johnson. Hancock, like Johnson, was more sympathetic to southerners than most Republicans, promising noninterference with elections and local conduct so long as residents remained peaceful. It made him one of the more popular Union commanders in the South. He was a bit too moderate for President Grant, who transferred Hancock to Dakota after he took office, but his combination as determined Union supporter and Reconstruction moderate made him a logical choice for the Democratic presidential nomination. After a few unsuccessful attempts, Hancock succeeded in obtaining that nomination in 1880, only to lose a close election to James Garfield. Hancock died in 1886, and his reminiscences were published the following year by his wife, Almira Hancock. Item 44. $875.