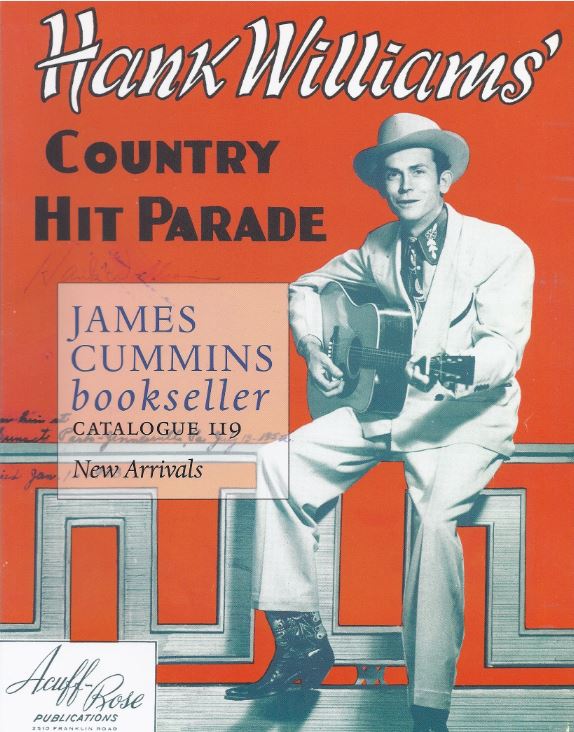 James Cummins Bookseller has issued his latest catalogue. Despite the cover, it is not titled “Hank Williams' Country Hit Parade,” though it is a hit parade of books. Hey, these are some good lookin' books. Williams' Hit Parade is just one of the many items offered. The real title is Catalogue 119 New Arrivals. Here are a few of those arrivals.

We will start with Mr. Williams, the southern country singer whose stardom was disrupted by alcohol and drugs, leading to his untimely death on New Year's day 1953 at the age of 29. No list of America's greatest songwriters is complete without his name, even if his musical genre doesn't always get enormous respect. Item 97 is Hank Williams' Country Hit Parade, a compilation of music for 20 of his songs. Williams has signed the cover. According to the previous owner, she obtained the music at a concert in Jennersville, Pennsylvania on July 13, 1952. There was a recording made of that concert, and at the end, Williams can be heard offering copies of the songbook and to autograph it for buyers. Priced at $3,500.


Item 1 is James Adair's The History of the American Indians. We don't know whether Kaw-Liga was among them, but perhaps, as this book is focused on the southern tribes. It was described by Sabin as the “best 18th century English source on the Southern tribes,” and as written by “one of the most colorful figures in Southern colonial history.” Adair traded with the Indians for 40 years, so he was quite familiar with their customs. He also believed they were descended from one of the Lost Tribes of Israel, so much of his time is spent trying to prove this theory. If you move past that, there is much that is accurate to be learned. This first edition was published in 1775. $5,500.


Item 26 is an inscribed copy of William S. Burroughs' Ali's Smile Naked Scientology to his friend and fellow beat writer, Allen Ginsberg. It states “For Allen Love,” and is dated August 30, 1979, the year after it was published. Hugh Urban, who has written extensively about the church, describes Burroughs' book as a “nonscholarly popular exposé of Scientology.” $3,000.


Here is a letter that may lead you to question your belief in the objectivity of newspapers. It was written by the ultimate showman, P.T. Barnum, to Henry D. Beach of the New York Sun. In it, Barnum encourages Beach to write favorably about the planned wedding of two of his smallest performers, Tom Thumb and Lavinia Warren. Writes Barnum, “If you will at the same time quietly suggest...that the elegant little woman Miss Warren...would make a brilliant match for the little General, the thing will be complete!” If that isn't enough, Barnum continues, “If I don't make it up to the Sun in the way of advertising two-fold, charge me what you please & I will pay it.” Barnum evidently didn't take a day off from promoting, not even Christmas, as this letter is dated December 25, 1862. The following February 10, Thumb and Warren were married. Item 4. $2,500.