Architecture and Art from Antiquariat Banzhaf 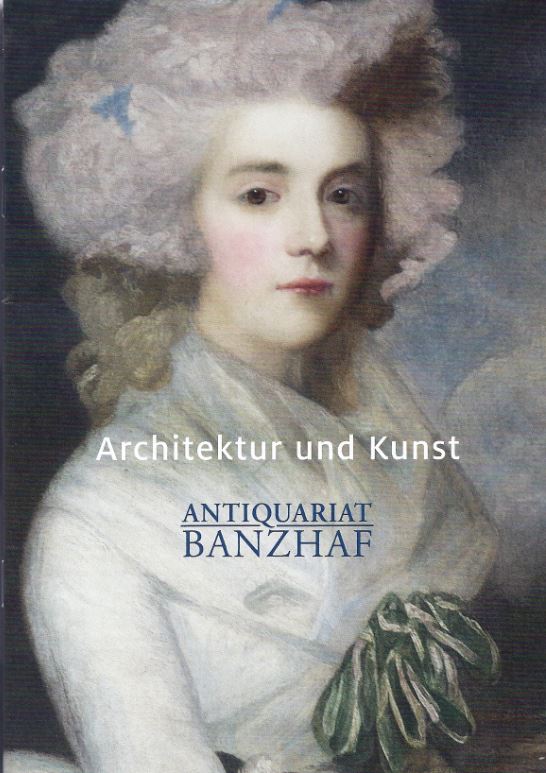 One of the Sutherlands on the cover of Antiquariat Banzhaf's catalogue.

Antiquariat Banzhaf has issued a catalogue of Architektur und Kunst. We will assume that English speakers do not need “architektur” translated. “Kunst,” in English, is “art.” Actually, English speakers do not have to fear this catalogue. Descriptions are provided in the English language, even if most of the books are not. There are, naturally, many in German, and many more in French and some other tongues. Architecture is the primary focus here, but there are other subjects which fit well with the term “art,” such as books about furniture and landscaping. Speaking of artistic beauty, we will start with the young lady on the cover of the catalogue.

Sadly, I do not know her name. She was evidently one of the Sutherland family, likely a duchess, and certainly of great means. Her picture can be found in Stafford House, by Lord Ronald Sutherland Gower, who grew up there. It is about as magnificent a house as one could ever imagine. Supposedly on visiting, Queen Victoria remarked that she lived in a house, but this was a palace. She may not have been exaggerating that much. Certainly, it was the finest private residence in London. It was originally built by the Duke of York, the famous “grand old” one. Naturally, he called it York House. He sold it to the Marquess of Stafford, hence the new name, although it stayed that way even when the Marquess was elevated to the Duke of Sutherland a few years later. It remained in the family for another 80 years, being sold in 1913, three years after this publication. As a result of the sale, it became Lancaster House, which it is today, though now owned by the government. The “house” opens into a great central hall, more reminiscent of Grand Central Station than a room in a house, with an enormous and magnificent grand stairway. This book displays the structure's magnificence. Item 36. Priced at €2,200 (euros, or US $2,892).


Item 2 is an early look at the concept of subways from France: Les chemins de fer dans les villes, by E. Jacqueline, published in 1856. It looks specifically at the ideas of civil engineer Edouard Brame, who proposed a freight transportation system for Paris which included underground rails. London had approved the building of a subway system only a short time earlier, but the actual operation of such a system was still several years away. Brame proved to be a bit ahead of his time as far as Parisians were concerned. Disputes over whether to put the rails under or above ground, who should run them, and such prevented Paris from following through with the same speed as London. It would not be built and opened in Paris until 1900. €2,000 (US $2,638).


Item 72 is Die Siedlung der Heimstatten-Genossenschaft zu Jena, published in 1927. This documents a Garden City Movement housing development in the city of Jena in Germany. The Garden City Movement was a turn of the century version of urban renewal, before that term became a synonym for unpleasant housing projects. Garden cities were designed to replace run-down inner cities where working people lived with nice, clean, thoughtfully designed communities. They included clusters of homes surrounded with open areas, combining city with country living. This book includes mounted pictures of Jena's Garden City and of the old housing in the city that it was replacing. €5,000 (US $6,595).