Bigfoot and other Big Books on the West from Gene W. Baade 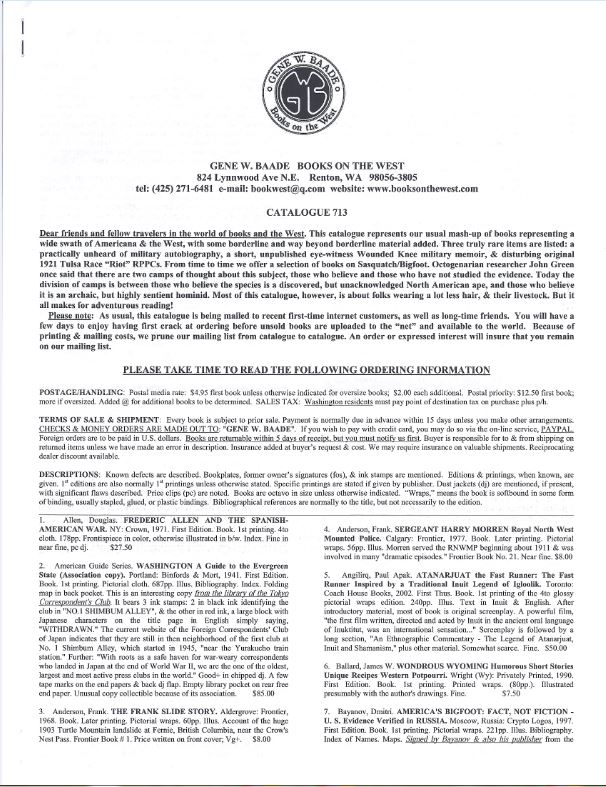 Gene W. Baade Books on the West has issued Catalogue 713 of primarily Western Americana, somewhat weighted to the Pacific Northwest. There is also some “borderline and way beyond borderline” material included. A few special items include an unpublished eyewitness account of Wounded Knee, postcards on the infamous 1921 Tulsa Race Riot, and a wide selection of material relating to Bigfoot or Sasquatch or whatever name he answers to (“Abominable Snowman” is evidently not considered polite any longer). Baade notes that today the camps are divided between whether Bigfoot is a North American ape or some other highly intelligent form of hominid. There is, actually, a third possible explanation why he has avoided a scientifically verified sighting in his Pacific Northwest home for so long, but we won't delve into that just now. It may be that Bigfoot is sitting down to dinner with D.B. Cooper right now, laughing at the skeptics.

Item 63 is a manuscript Statement of John F. Hobbs Telling His Experiences as Cowboy, Texas Ranger and Indian Fighter. It is not in Hobbs' hand, but rather that of Spokane history writer (15 books to his credit) and bookstore owner Jerome Peltier, who transcribed Hobbs' verbal account. However, his story was never published. Hobbs left his home in Massachusetts in 1883 at the age of 15 to go to Texas. After working for a time as a cowboy outside of El Paso, he joined the army using a false age to get in. He served at Fort Apache, briefly with the Texas Rangers, was shipped out to California, and was later sent to Pine Ridge Agency in the Dakota Territory, where he would witness what is considered the last serious Indian battle. Hobbs apparently did not much appreciate the Indians making the soldiers give chase around the territory during the bitter cold winter. His job was to “intercept Big Foot's band at Paradise Valley.” We will here presume he was giving chase to Sioux Chief Big Foot, rather than the hairy beast of the Pacific forests. He then gives an account of the massacre at Wounded Knee: “In the excitement everyone rode down Indians and shot them like chickens.” Hobbs signed the document on December 11, 1952. He died in 1954. Priced at $750.


Item 130 is Bigfoot at Bluff Creek, by Danny Perez, published in 1992. This is about the other Bigfoot. Bluff Creek in California was where some of the first Bigfoot footprints were found and where the film of the creature sauntering through the woods in 1967 was taken. It is signed by Perez and Bob Gimlin, who was with videographer Roger Patterson on that fateful day. The book explains why what to the naked eye looks like “a man in a monkey suit” cannot be a man in a monkey suit. $150.


Bigfoot gets around, as attested by this book, Bigfoot Encounters in Ohio: Quest for the Grassman, published in 2005. It is signed by author Christopher L. Murphy, who investigated sightings for over 20 years. How Bigfoot made it all the way the way to Ohio unnoticed is unclear. Perhaps he took the Greyhound, where it's not that unusual to find a few unusual passengers. Item 121. $30.


From Big Foot we go to Scratch Ankle. Some may question the existence of Bigfoot, but no one can question the existence of Scratch Ankle. It is a small community in Monroe County, Alabama. Item 137 is Scratch Ankle, U.S.A. American Place Names and their Derivation. The book was written by Myron J. Quimby and published in 1969. It covers locations from Accident, Maryland, to Zim, Minnesota. As for Scratch Ankle, it is thought the name comes from some sort of low lying bugs that bite your ankles, causing you to scratch. $10.


Item 124 provides several reminders of a horrible incident in American history. It is a group of 11 postcards depicting the shameful “Tulsa Race Riot” of 1921. Some minor incident, likely accidental, between a young black shoeshiner and a teenage white elevator operator woman led to the man's arrest, and as was all too typical, the threat of a lynching. It led to whites and blacks arming themselves as blacks sought to protect the imprisoned young man from gathering mobs. A huge riot ensued in which the Greenwood section of Tulsa, one of the most prosperous black communities in America at the time, was burned to the ground. Something between 33 and 300 people died, most black. Eight hundred mostly whites were admitted to white hospitals, but injuries to blacks are unknown as both black hospitals were burned down. So was all of Greenwood's business district and over a thousand homes. Among the captions on these 1921 photographic postcards are “Little Africa on fire,” “Scene during...riot,” “Negro slain,” “Chared [sic] Negro,” “Truck being used to gather Colored Victims,” and “Captured Negroes.” $1,250.