More from the Strange World of Garrett Scott, Bookseller 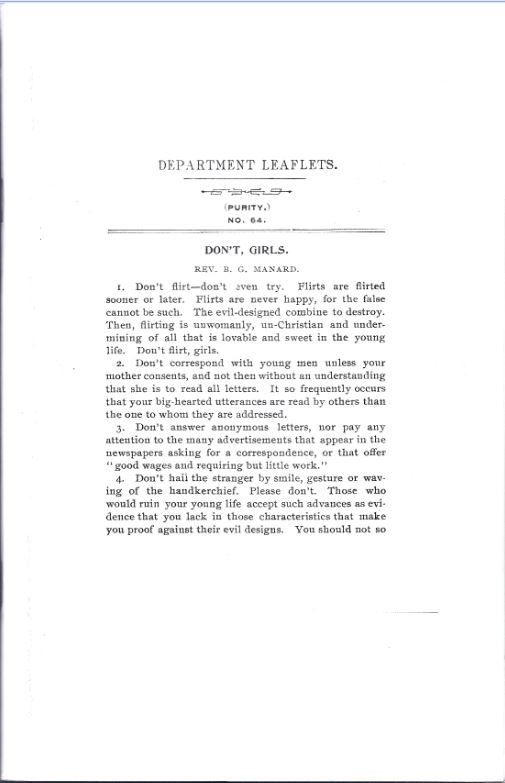 Do, Girls, read this catalogue!

Garrett Scott, Bookseller has released the latest of his most entertaining catalogues, Catalogue 40. A New Rapid System. More about that title in a moment. Scott specializes in the obscure and strange. Most are pamphlets from the 19th or early 20th century. The authors often present a different viewpoint from most writers, dare we say, from most normal people? Some were charlatans, others possessors of unusual opinions, and some, undoubtedly, just plain crazy. A few rational works are also thrown in, just to keep us on our toes. Some attempt to explain their odd views as being scientific, others as biblical. Medicine is a favorite of the charlatans. You may not come away with a lot of useful knowledge from a Garrett Scott catalogue, but you will certainly be entertained.

Getting back to that title, the “New Rapid System” has a double meaning. It is a self-deprecating comment about the infrequency of Scott's catalogues, and also a reference to item 43 within, 4000 Years History in One Hour. By the Two Youngest Authors and Orators – Nine & Ten Years Old. Bernice and Eunice Futterer. The Effects of a New Rapid System of Historical Juvenile Education... This piece was created by Antonia Frederick Futterer in 1911. An article in the Los Angeles Times once suggested he could have been the inspiration for the fictional character Indiana Jones. In the 1920s, he went on a search for the Lost Arc of the Covenant, and claimed to have found its location, though not actually finding the arc itself. Futterer was an Australian by birth who came close to death while searching for gold down under. He pledged his life to God if it was spared. It was. He came to America around 1911, settling in the Bay Area. He created something he called the Eye-Ographic chart, some sort of large mural covering biblical history. This pamphlet must have been an offshoot of this business venture, where his precocious and well-coached daughters could orate and write about all of human history, primarily biblical, in an hour's time. Futterer was offering some sort of program that combined speed learning and biblical study. It would be in the next decade that Futterer went on his mission and daring adventures in search of the Lost Arc. It was also during this period that he set up the Bible Knowledge Society in Los Angeles. The Society opened a museum in the 1920s including many artifacts Futterer brought back from the Holy Land. Though rather obscure and probably not known by most residents of Los Angeles, the museum is still in business today. Priced at $225.


Have you ever wondered what is inside of the Earth? Some think magma, others shale oil. William Reed wasn't fooled. “In the interior are vast continents, oceans, mountains and rivers. Vegetable and animal life are evident in the new world, and it is probably peopled by races yet unknown to the dwellers upon the earth's exterior.” How he knew this is unclear, as I am quite certain he never visited the place. His book is The Phantom of the Poles. Access was reached through the poles. That is the reason for the title that they are phantoms. In reality, there are no poles, just great holes which provide access to the hollow earth. The date of this book is noteworthy – 1906. Within five years, both poles would be reached for the first time, putting an end to this theory, presuming anyone other than Reed took it seriously in the first place. Item 95. $250.


Item 22 is one of several works offered from the redoubtable “poet lariat,” Bloodgood H. Cutter: Poetical Lecture Suggested After Seeing the Model of Solomon's Temple... Cutter preferred to go by the name “The Long Island Farmer,” but Mark Twain immortalized him with the “lariat” moniker after having the misfortune of taking a cruise to the Holy Land on the same ship with Cutter. Cutter had a habit of “lassoing” reluctant listeners into hearing his poetry and Twain was one of his victims. It's hard to get far away when you're on a boat. These poems were written in celebration of a large model of King Solomon's temple that was on tour at this time (1860). Cutter at least has the decency to warn readers not to expect too much of his poem, noting early on:


That I am a plain Long Island Farmer,

And do not understand the rules of grammar.