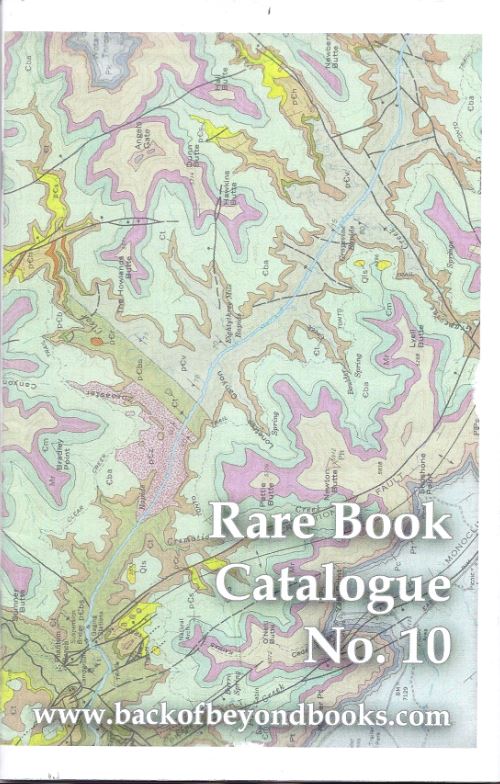 Rare books from Back of Beyond.

Back of Beyond Books has issued Rare Book Catalogue No. 10. Back of Beyond specializes in Western America, and the four corners states of the Southwest in particular. Their books are not so much cowboys and gunslingers, but explorations, archeology, geology, and western based writers and artists. While this describes their primary concentration, they do not put any limitations on themselves, so there are books totally unrelated to their specialty. T.S. Eliot's Wasteland doesn't have much to do with the Southwest, though Lt. Joseph Ives, one of the earliest explorers of the Colorado River and Grand Canyon, concluded it was essentially that, not destined to be of much use to anyone. It is unlikely Oscar Wilde ever visited the area, and certain that Leonardo Da Vinci did not. Western slang never made its way into Samuel Johnson's Dictionary of the English Language. Nevertheless, these works make their way into this catalogue alongside books related to the West. Here are a few.

For those wishing to take a trip out west after the Civil War, a handy reference was Turner's Guide from the Lakes to the Rocky Mountains... Written by T.G. (Timothy Gilman) Turner and published in 1868, this is not an Oregon Trail type book. The railroads now reached this area, and this guide provides information on riding the rails. While the guide's terminus is the Rocky Mountains, it includes details about places along the way, such as Cleveland and Chicago. It was published in Chicago, thereby fitting a collection of ante-fire imprints as well as railroads and travel. The book contains 52 pages of advertisements for businesses along the rail lines, including a hand-colored one for Studebaker wagons. Studebaker would be one of the rare wagon makers to make the successful transition to automobiles a few decades later. Item 83. Priced at $1,150.


The most spectacular remnant of an ancient Indian community is found in Mesa Verde National Park. The main structures of these cliff dwellings were discovered by a couple of southeastern ranchers in 1888. While their discovery didn't elicit much interest from the Smithsonian at the time, Swedish scholar Gustaf Nordenskiöld was so intrigued that he rearranged his plans to visit the American site. He conducted archeological excavations, and if his activities were not quite as careful as those today, they were far more scientific than typical amateur digging. Nordenskiöld published his findings, including many of the first photographs of these dwellings, in 1893 in his book Cliff Dwellers of the Mesa Verde, Southwestern Colorado: Their Pottery and Implements. It includes an appendix on human remains by G. Retzius. The residents of this early, complex civilization, variously called Ancient Pueblo People or Anasazi, disappeared around the year 1300. Not only did they disappear, but so did their neighbors throughout the region, in communities large and small. No one is certain why, but the most likely explanation is the great drought that arose in the 13th century and continued for many years, or possibly encroachment by more warlike tribes from California. The inhabitants of Mesa Verde most likely moved south, to be absorbed by other people, and while later tribes visited the area, none ever again inhabited the dwellings of Mesa Verde though they still stand today. Item 12. $4,500.


Here is one of those books from the non-Southwest part of the catalogue, under the heading “Fiction and Poetry.” And yet... It is Woody Guthrie's autobiographical Bound for Glory, published in 1943. Guthrie spent most of his early life around the edges of the Southwest, growing up in Oklahoma, some time in Texas, and moving out to California in the Dust Bowl era. His book depicts his life, written as the ordinary, not well-educated man of his surroundings, though Guthrie was hardly an ordinary man. Though best known for his songs, Guthrie was also a writer and poet, and chronicler of America during difficult times. Item 20. $725.


Item 79 is A Historical, Descriptive, and Commercial Directory of Owyhee County, Idaho, author unstated, published in 1898 (this copy is missing the title page). Owyhee County is located in the southwestern corner of Idaho, the second largest county by area in the state. Nonetheless, it is lightly populated even by Idaho standards, with most of its residents located on the other side of the Snake River from Idaho's largest city, Boise. In 1898, there was an active mining industry, and this book provides information about that industry, early settlement, and even Indian conflicts. Today, ranching and irrigated farming are the major industries in this semi-arid land. Many will recognize “Owyhee” as an early spelling of Hawaii and wonder why a county in Idaho would have such a name. The name comes from three early trappers who came from Hawaii and disappeared into the wilderness in 1819. $550.