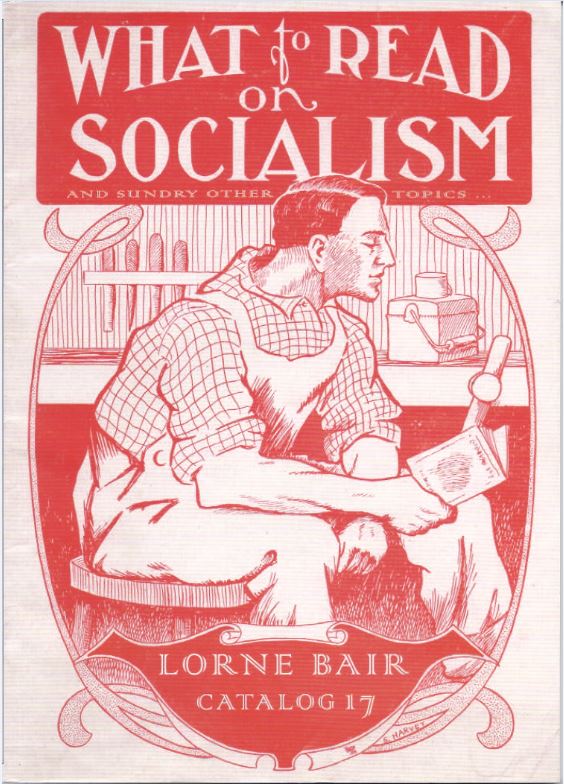 Lorne Bair Rare Books has issued Catalogue 17, which looks like its title is “What to Read on Socialism and Sundry Other Topics,” but is not. It would be a good title, though. Bair specializes in radical literature, most of it socialist in orientation. However, there are “sundry other topics,” some of it being other causes generally associated with the left, black, women's, workers' and gay rights, anti-war protests, drug culture and the like. Then, in the interests of fairness and balance, there are some publications from the far right as well. Capital gets its occasional say, even if labor speaks more loudly in these pages. Here are some of the publications that take us to the edges of the political spectrum, but rarely to the middle.

There may be no more iconic left-right confrontation than that of the Spanish Civil War. The Fascist aligned Spanish military went after the Republican government in a war that attracted supporters from all over the world. Liberal to socialist to communist supporters came to fight for the Republicans, while Fascists and the German Nazi regime provided air power to support the generals. It was a brutal war, hundreds of thousands killed, before the Fascists under General Franco gained final control. Pablo Picasso created his most famous painting during the war, a piece in support of the Republicans. It is entitled Guernica, and it displays the horror of bombings of that city by the Fascists in 1937. During the final year of that war, 1939, the painting was placed on tour to raise money for refugees of the war. Item 239 is the program for its appearance in New York – The American Artists Congress Presents the Masterpiece Guernica by Pablo Picasso. This copy is signed by Julio Alvarez del Vayo, Foreign Affairs Minister during the Republican government and a man who sought the overthrow of the Fascist government through the end of his life (both del Vayo and Franco died in 1975). Priced at $400.


Once in awhile, two causes that normally appeal to the same types of constituencies run into conflict. Here is an example of a conflict between black and gay rights. The Saint was a notable gay nightclub in Atlanta several decades ago, a time and place not terribly suited to recognition of gay rights. However, it came under attack from advocates of black rights in this circa 1980 poster. It displays a photograph of 38 men who worked at the Saint at the time. The poster is headed, This is a Phenomenal Photograph. It points out that two-thirds of Atlanta's residents are black, “but...they ain't at the Saint.” A look at the photograph reveals that not one of the 38 employees is black. “What are the odds,” it continues, “all 38 jobs to Whites, 0 to Blacks? Less than one in a trillion.” It concludes that this is not what is phenomenal, but what is is that “nearly every Gay bar in the country is just like the Saint.” Item 193. $200.


Item 130 proved to be the ultimate muckraking book: The Jungle, by Upton Sinclair. As Sinclair later explained, “I aimed for the public's heart but by accident I hit it in the stomach.” Sinclair described the horrors of conditions in the meatpacking industry of Chicago at the turn of the century. His intent was to expose the terrible conditions in which the immigrant workers labored, but what ended up catching the public's attention was the deplorable sanitary conditions under which the meat they ate was produced. Offered is a first issue of the trade edition, published in 1906. $200.


Item 189 is an ugly promotion for eugenics from a different side of the political spectrum. W.E.D. Stokes was a man born to considerable wealth, who in turn added to that fortune as a real estate developer, earning more money than friends along the way. He was born of the family that owned mining company Phelps Dodge, though he had to sue his brother for a share of the inheritance when he was left out of his father's will. He had a couple of marriages that ended in very ugly divorces and numerous affairs. Along with his active personal life and real estate development, Stokes found himself regularly in litigation. Nonetheless, he managed to find time in 1917 to write The Right to be Well Born; or, Horse Breeding in Its Relation to Eugenics. As the neither kindly nor tactful Stokes argues, “...in breeding horses, we render impotent the unfit. We never try to render fit a sire by education. We have no sanitariums for weak horses, to keep them alive at public expense, and then turn them loose to reproduce their unfitness, to refill more homes for defectives. The same rule should apply to humans...” $75.