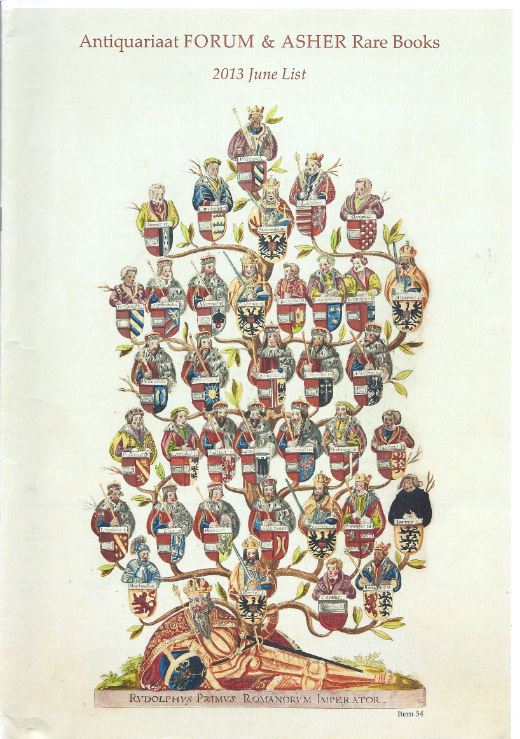 Antiquariaat Forum and Asher Rare Books have published a 2013 June List. This was published in advance of the recent London Antiquarian Book Fair, so there is a good mix of material from various countries offered by the Dutch booksellers. As for the type of material, it is too varied to adequately describe. We can say that it is primarily nonfiction, often works of travel, science, politics and the like. Here are a few samples.

Item 54 is a history of Austria and the House of Hapsburg, about three centuries worth, though it still cuts off in the middle. The title is Annales rerum belli domique ab Austriacis Habspurgicae gentis principus... It provides a genealogy of the family, portraits (see image on front cover of this catalogue), and coats of arms. The work was written by Dutchman Gerardus de Roo, and edited by his friend Conrad Dietz, secretary to Archduke Ferdinand II. It was published in 1592. The years covered are 1273-1555. The starting date of 1273 marks the beginning of the Hapsburg dynasty when Rudolph I became King of Germany, but it continued long after 1555, ruling countries as late as the 20th century. Priced at €8,500 (euros, or approximately US $11,317).


Item 40 is an interesting and lengthy piece from the era of the Seven Years War. The title is L'Observateur hollandois... seven volumes containing 46 letters sent to a Dutchman by Jacob Nicolas Moreau. The letters were an attempt to stir up anti-British feeling during this war between England and France. It includes much information on the French and English colonies in North America where this battle was being waged under the name of the French and Indian War. Moreau would be disappointed by the outcome, but he would go on to obtain much support from the French court. He was an ardent royalist, whose later works would include an attack on the Encyclopaedists and others of the Enlightenment, as he supported the absolute power of the monarchy. It would also earn him various appointments at the court, including as tutor to future King Louis XVI and librarian to Marie-Antoinette. Perhaps he wasn't quite as evil as he sounds, as he believed everything should be done for the people, just nothing by them. His opinions would not be such as to set him well during the revolution. He was relieved of all duties in 1790 and the fortune he made in his years serving the King was confiscated. He was confined to his house, and yet, amazingly enough, he was never carted off to the guillotine. He survived even the Reign of Terror and lived to the beginning of the 19th century. €4,950 (US $6,590).


Item 61 is a treatise on fossilized invertebrates, trilobites in particular: Naturhistorische abhandlungen und erläuterungen besonders die petrefactenkunde. The author is given as Adolph von Tilesius, who evidently is Wilhelm Gottlieb Tilesius von Tilenau. Tilesius was a naturalist, physician and explorer who participated in von Krusenstern's first Russian circumnavigation and later assembled the first wooly mammoth from its skeleton. This book focuses particularly on trilobites, those exoskeletal creatures that once swam or slithered along the bottom of the world's oceans in great numbers. They were perhaps the most dominant of life forms in the Cambrian period, beginning a little over 500 million years ago, when suddenly all sorts of life forms suddenly appeared after billions of years of single cell or primitive multi-cell animals. Thousands of species of these creatures developed, and for another 250 million years they continued to inhabit the oceans, finally disappearing in a massive extinction event, greater than that which later eliminated the dinosaurs, 250 million years ago. €12,500 (US $16,643).


Next up we hear A Voice from the Bush in Australia. That voice belonged to Thomas Pope Besnard, an Irishman who moved to the land down under and thought others should join him. This 1839 book consists of letters Besnard wrote from New South Wales, describing the opportunities available in this country. He made a living as an overseer of a chain gang (his charges probably didn't have such a positive view of Australia). Presumably, there were better opportunities for his fellow Irishmen Besnard hoped to convince to come. Item 7. €4,000 (US $5,325).