The Heart of America from the William Reese Company 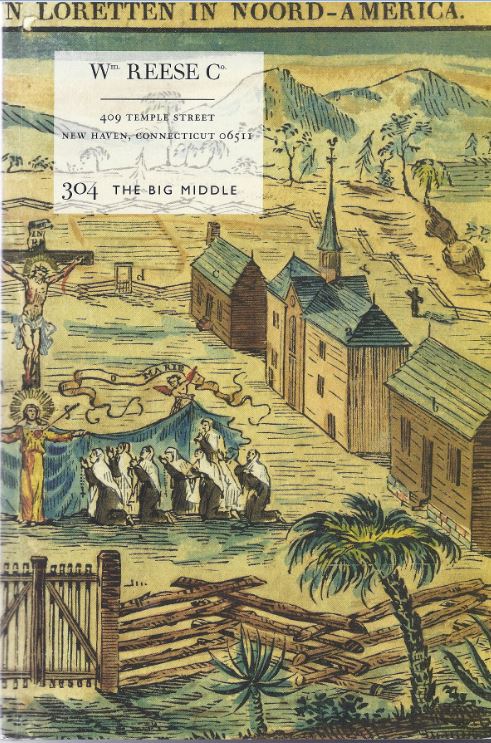 The William Reese Company has issued their catalogue number 304, The Big Middle. The “Big Middle” refers to the middle of the U.S.A., or, as Reese notes, to a large extent the area drained by the Mississippi River. It extends beyond that a bit at times, such as the Great Lakes region, but most of what we now call the “Heartland” of America is part of the Mississippi watershed. There were some early visits in the 17th and 18th century, notably by French explorers, but it was during the 19th century that exploration, quickly followed by settlement, overwhelmed the area. From an unknown wilderness, still the frontier at the beginning of that century, it emerged at the end as the heart of America. It was an exciting time for everyone who was not an Indian. Here are some of Reese's items.

We start with one of those earlier French accounts, Histoire de la Louisiane, by Antoine Le Page du Pratz. Le Page du Pratz traveled to French Louisiana in 1718, and remained there for the next 16 years. Much of that time was spent with the Indians, particularly the Natchez. He learned their language as well as the culture. His account attempts to describe events through their words, rather than that of the typical European observer. Le Page du Pratz returned to France in 1834, but did not get around to publishing his memoirs for most of two decades, it first running serially in a magazine, and then in book form in 1758. Although Le Page du Pratz's contacts with the natives occurred in the southern part of Louisiana, President Jefferson felt it was sufficiently informative to tell Lewis and Clark to take a copy with them on their expedition. Item 102. Priced at $3,000.


After independence, the Americans would move west, to settle vast amounts of land. The problem was that the land was already settled, though more sparsely, by the land's natives. The nation's early leaders waged a battle of conscience between a desire for more land and a recognition of the wrong being done to those already there. In time, concern for the rights of the natives would be forgotten to the desire for more and more land, but in the early days there was more recognition of Indian rights. Item 175 is a 1794 report sent to Congress by President Washington with the caption heading, Gentlemen of the Senate and House of Representatives. I lay before you a report made to me by the Secretary of War respecting the frontiers of the United States. The writer was America's first Secretary of War, Henry Knox. Knox is honest. “The desires of too many frontier White people to seize by force or fraud upon the neighbouring Indian lands has been, and still continues to be, an unceasing cause of jealousy and hatred on the part of the Indians... As we are more powerful and enlightened than they are, there is a responsibility of national character, that we should treat them with kindness and even liberality. It is a melancholy reflection that our modes of population have been more destructive to the Indian natives than the conduct of the Conquerors of Mexico and Peru. The evidence of this is the utter extirpation of nearly all the Indians in most populous parts of the Union.” $9,500.


In the time between Washington and Lincoln, all of the land east of the Mississippi would be settled. In the once wilderness of Illinois, two notable political figures would begin a series of debates that would change the course of the nation's history. The Lincoln-Douglas debates would take place in 1858, but a year earlier, Lincoln spoke in response to comments by Douglas. Item 105 is the Speech of Hon. Abram [sic] Lincoln, in reply to Judge Douglas, from June 26, 1857. The Dred Scott decision, that effectively said black people have no rights under the U.S. constitution, was deeply disturbing to Lincoln. The ambitious Douglas had no such qualms. Douglas claimed that those who said blacks had rights did so only because they wanted to “vote, eat, and sleep, and marry with negroes.” Lincoln responds, “I protest against the counterfeit logic which concludes that, because I do not want a black woman for a slave I must necessarily want her for a wife. In some respects, she certainly is not my equal; but in her natural right to eat the bread she earns with her own hands, she is my equal, and the equal of all others.” If this is not quite how we would express the thought today, this was a different time and Lincoln's views were still evolving. Five years later, he would free the slaves. $17,500.