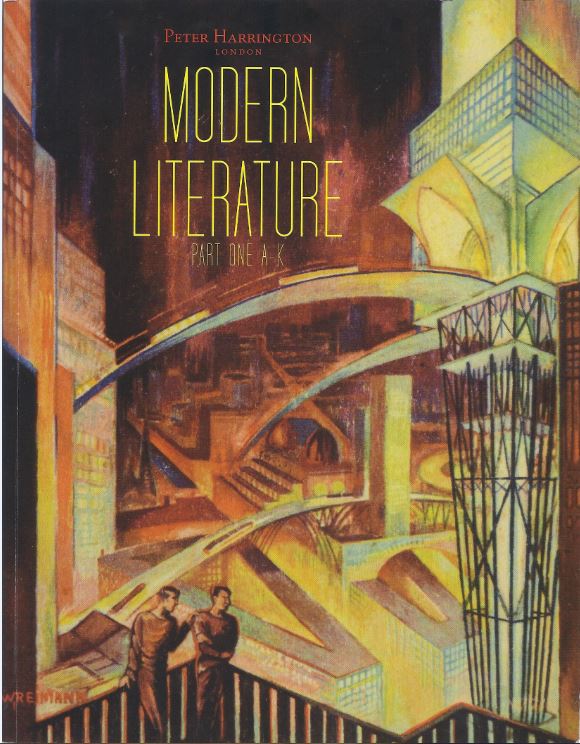 A Metropolis of modern literature.

Peter Harrington of London has released a catalogue of Modern Literature, Part One A-K. Obviously, there will be more, but this first part covers authors from J.R. Ackerley to Jerzy Kosinski. If you collect 20th century writers within this section of the alphabet, you have a great chance of finding a match as there are almost 500 books offered. Most are first editions and condition is generally exceptional. Here are a few samples of the books you will find.

The image you see on this catalogue's cover comes from the dust jacket of Metropolis, published in 1926. It was written by Thea von Harbou, but based on the screenplay prepared by her and her husband Fritz Lang. It is a science fiction piece about the world a century hence (which today is only 13 years away). It is a fantastic, futuristic city on the surface, but under the streets, workers slavishly run the machines that keep this city working. The film was released the following year and was the most expensive silent film ever made. The film may have been predicting a terrible future a century away, but this was a German production, and the most horrible of slave labor camps would be coming to that land only a little more than a decade in the future. No one could have imagined at the time. Lang opposed the rise of the Nazis and escaped to America in the early 1930s, while von Harbou became a supporter and filmmaker for them. Naturally, the couple split. Item 355. Priced at £9,500 (British pounds, or about $14,662 in U.S. dollars).


Item 440 is the first book from James Joyce, Chamber Music, published in 1907. While Joyce was a talented singer, this is a collection of poetry, not songs. Joyce was only 25 years old at the time and made his living though teaching and various business ventures. His success as a writer was still several years away. However, this book achieved a certain amount of critical acclaim, though this was not reflected in its sales. Offered is the first issue of the first edition. There were 509 copies printed, but only around 200 were bound. The others were bound later after Joyce's writing became successful. This copy is from the first binding. £6,500 (US $10,023).


For those who like books that actually relate to music, there is Porgy and Bess. An Opera in Three Acts... This was produced for the 1935 opera with music by George Gershwin, lyrics by Dubose Heyward and Ira Gershwin. Heyward wrote the original book and play on which the opera was based. This is a first edition, limited issue (250 copies), signed by both Gershwins, Heyward, and Director Rouben Mamoulian. Item 310. £9,500 (US $14,656).


Item 270 is a book signed by Ian Fleming, but it is not one of his own. Rather, it is a copy of Humoresque, by the Italian born British poet Humbert Wolfe. The date of Fleming's signature explains why it was not on one of his own books – 1926. Fleming was only 18 at the time and would not publish his first novel for another 27 years. Wolfe was a popular poet in the 1920s, so it is not surprising the young Fleming had a copy of one of his books, though he has now been mostly forgotten. £650 (US $1,002).


I don't know what is the most well-read book of the second half of the 20th century, but this one must be on the list: Lord of the Flies, William Golding's look at a new “civilization” formed by children stranded alone on an island. It is a depressing look for anyone who thinks humanity has evolved very much over the, say, last few million years. Beginning with their British schoolboy rules, the children quickly break down to living the law of the jungle when left to their own devices. The distance between us and the jungle is oh so thin. This is a first edition proof copy from 1954. Item 316. £5,250 (US $8,098).