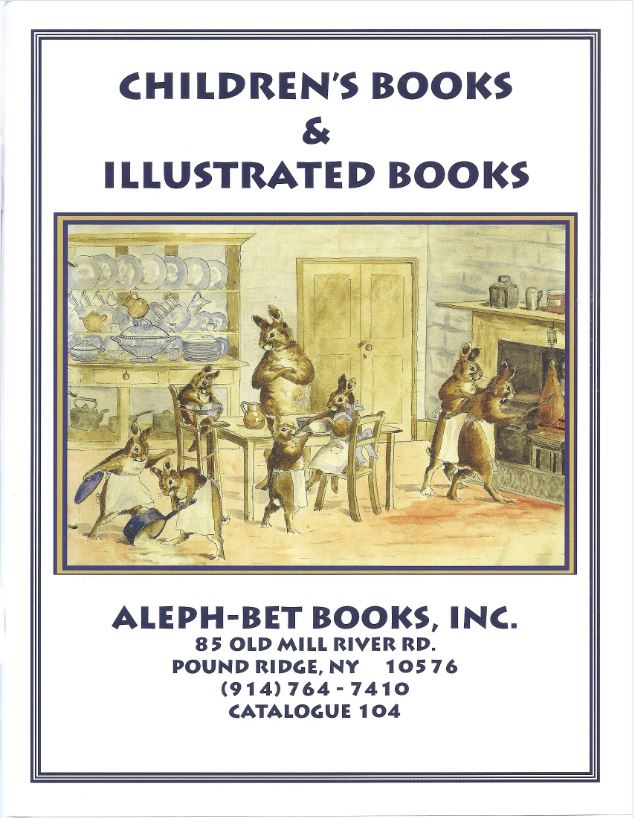 Aleph-Bet Books has released Catalogue 104 of Children's Books & Illustrated Books. Aleph-Bet's are the most consistent of catalogues we receive. Each includes 600 items, every item illustrated and described. Practically all qualify as being both for children and illustrated. You can count on finding the most familiar of children's authors, the Seusses, Sendaks, Baums and Disneys, along with the obscure. Most are in English, but other languages will also be found. Most are fun, but a few reflect ugly prejudices of their times and authors. Everyone will find something that will bring you back to your childhood. Here are just a few.

We will start with one of those books that are not in English, Paraplyernes Opror (Umbrellas Revolt). Aleph-Bet assures us, “You don't need to read Danish to enjoy this book.” A good thing, since not many people do. Author Kjeld Abell's “almost surreal” illustrations do the trick even if you can't follow the text. You will never think of umbrellas quite the same once you realize what happens when they rebel. Published in 1937. Item 41. Priced at $200.


While there was fun coming off the presses in Denmark in the late 1930s, it was pure ugliness in their neighbor to the south. Item 374 is Der Giftpilz (The Poisonous Mushroom) by Ernst Hiemer, published in Nuremberg in 1938. During the war, Hiemer served as editor under Julius Streicher (later executed for war crimes) of the rabidly anti-Semitic newspaper Der Sturmer. It regularly advocated the extermination policies carried out by the Nazis. Hiemer shared its most repugnant views. This book is filled with hideous stereotypes of Jews, designed to sew hatred among German youth. $6,000.


Today society encourages children to get out and play, rather than sit around the house, as being important to physical health. This reality was recognized over 200 years ago, as shown in this book published by J. Johnson of Philadelphia, circa 1805: Youthful Recreations. As it points out, “For he who sits by the fire all day, And never goes abroad to play, May keep himself from being cold, But may not live till he is old.” Truer words were never rhymed. This book includes descriptions and illustrations of various games of the day, such as football (“a manly exercise not proper for girls”), archery, battledore, shuttlecock, hopscotch, rocking horse, kite flying, rope skipping, bait the bear, and marbles (that last one doesn't sound too athletic). Item 193. $1,850.


Here are some more rhymes: Rhymes of Real Children, by Betty Sage, illustrated by Jessie Wilcox Smith. Published in 1903, it includes six large color plates by Smith. This copy contains an original two-page typed and signed poem mounted to the front endpaper. The writer is William Lloyd Garrison, Jr., son of the famed abolitionist of the same name. Abolition already achieved, the younger Garrison was an outspoken advocate of women's rights and suffrage. Item 541. $675.


I'm not sure how Jack Lait got all of the necessary approvals to put out this book in 1926: All the Funny Folks. He has managed to take many of the leading cartoon characters of the 1920s and weave them together into one story. So here we find Jiggs and Maggie, Krazy Kat, Happy Hooligan, Tillie the Toiler, the Katzenjammer Kids, Dinty Moore, Barney Google and many others. Barney should sue that internet company for stealing his last name. I remember many of these characters, though from days later than the 20s, but don't know whether any are still active. Item 118. $500.