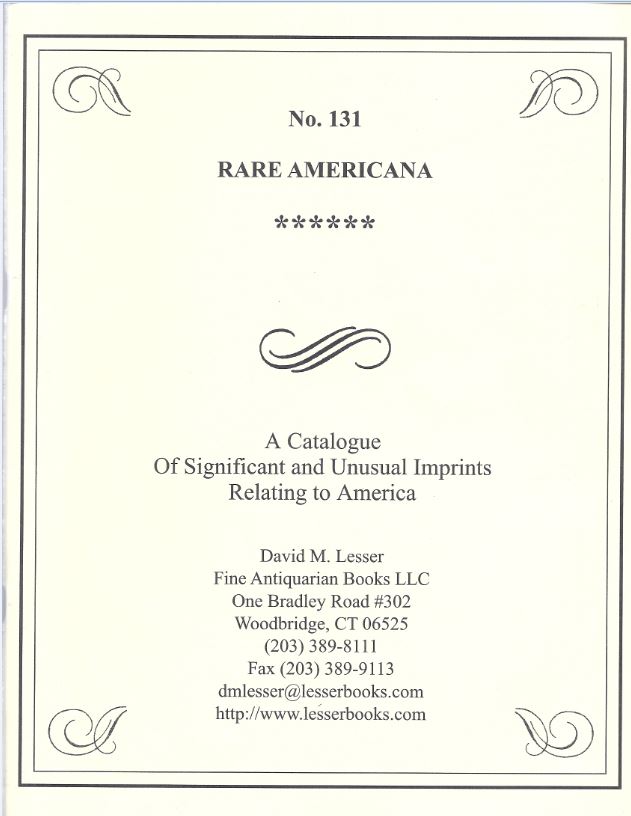 David Lesser Fine Antiquarian Books has reached their catalogue No. 131 of Rare Americana. Lesser specializes in shorter form works on paper – pamphlets, broadsides, manuscripts, photographs, and occasional books. This selection runs slightly later than most, only a few items from the colonial era, while moving past their usual cut off at Reconstruction to some later 19th and early 20th century material. Naturally enough, the material all pertains to America, in this case, the United States of. Here are some samples.

We will start with an obscure item pertaining to a libel lawsuit filed by Theodore Roosevelt. During the election of 1912, the former Republican President split with his party's nominee, the current President William Howard Taft. Roosevelt ran as an independent, under the “Bull Moose” banner. Ultimately, the Republican vote was split, with Roosevelt beating out Taft, but still finishing behind Democratic nominee Woodrow Wilson. Roosevelt's actions obviously upset a Republican editor from Marquette County in the Upper Peninsula of Michigan, George Newett. Newett charged that Roosevelt was a drunken, profane liar. The former President was not amused, and after the election sued Newett for libel. Roosevelt won, and Newett had to issue a statement declaring “I am forced to conclude that I was mistaken.” While Roosevelt was insistent on defending his integrity, he was not mean spirited. Though the trial cost him $40,000, he asked the judge for the smallest monetary award possible – six cents. After the trial, Roosevelt's cousin, close friend and adviser, W. Emlyn Roosevelt, put together a transcript of the trial. The former President had called on numerous notable witnesses to attest to his character, including people such as Admiral Dewey and reform journalist Jacob Riis. It was published in a small run, perhaps 100 copies, mainly to be shared with witnesses. This copy was sent to Albert Shaw, a journalist who wrote a book about Roosevelt and provided testimony for the trial. It comes with a letter signed “T. Roosevelt” sent to Shaw thanking him for his testimony, which the former President considered very valuable as Shaw understood his motives. Item 119. Priced at $6,000.


There have been various arguments made both for and against capital punishment, but here is one of the more interesting ones: Capital Punishment. The Argument of Rev. George B. Cheever, in Reply to J.L. Sullivan, Esq... Mr. Sullivan was an opponent, Rev. Cheever, perhaps unexpectedly, the proponent. He makes the standard argument that people are more likely to kill others if they know their own life will be spared. He then offers a theological justification that I missed in my bible studies. Rev. Cheever says capital punishment has been ordained by God, in effect to correct His mistake of “divine lenity in the case of Cain.” Apparently God saw that His leniency after the killing of Abel was not so good, and therefore made a covenant with Noah and his descendants to impose capital punishment. Item 32. $250.


In the days before the Civil War, not even free blacks were guaranteed to remain free. Someone might claim they were runaway slaves, or capture a free black in the North and sell him in the South. Such a person often needed papers to prove his freedom. Item 4 is such a document from Maryland, a northern state but one that permitted slavery as late as 1864. It is dated 1832, and it is a manuscript writing that is signed by a local Justice of the Peace. Its purpose is to establish that David Preston is a free man. In the document, Elizabeth Wright swears that her father “set free and manumitted from Slavery a certain Negro woman named Elizabeth Preston, who is the mother of David Preston, who...was born free.” $450.


Item 48 is the first and only compilation of Florida territorial laws: Compilation of the Public Acts of the Legislative Council of the Territory of Florida, Passed Prior to 1840. The legislature hired John P. Duval to put this book together, it being published in 1839. Spain ceded Florida to the United States in 1819, and it was admitted to the Union as the 27th state in 1845. $1,250.