New Arrivals at The Veatchs Arts of the Book 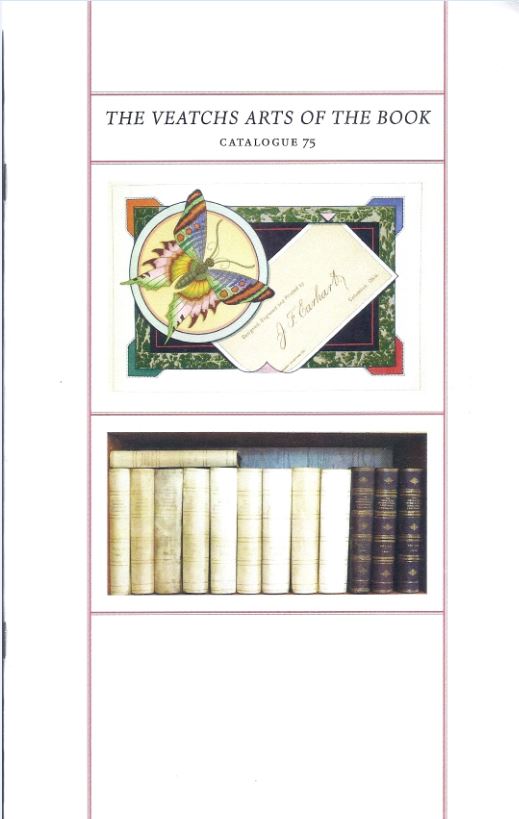 The 75th catalogue from The Veatchs Arts of the Book.

The Veatchs Arts of the Book has reached a numerical milestone: Catalogue 75. Spring Arrivals, Including Artists' Books, Barbarian Broadsides, Munder's Poetry Broadsides, Laboratory Press Student Projects, the International Printers' Specimen Exchange. Actually, it contains quite a bit more. That title couldn't possibly cover the entire variety of material herein. However, as to be expected, it all fits within the book arts category. Here are some samples.

Most items in this catalogue are from the 20th century, or even the 21st. We will start with a noticeable exception. Item 12 is a copy of the Gospels in Arabic, published by the Typographia Medicea (Medici Oriental Press) in 1591. It was founded by Ferdinand de Medici, of that famous family. That connection enabled him to become a cardinal at the age of 14, though he wasn't a priest. He later married and ruled Tuscany. Unlike some of his relatives, Ferdinand had a reputation for generosity and ruled with justice and consideration for minorities. Among his works was the foundation of this press, whose purpose was to spread the Gospels to the oriental or Arabic world. Evangelium Sanctum Domini Nostri Jesu Christi is an example of an attempt to convert Moslems. The Medici Oriental Press, which operated from 1584-1614, also published scientific books written in the Arab world in the original Arabic, perhaps to bring advanced leaning from that part of the globe to Europe. Priced at $2,850.


Item 20 is not so old, though it does take us back: Nineteenth Century Type Displayed in 18 Fonts. It displays complete alphabet specimens in various colors, identified by name, size, date and foundry. This book was published in 300 copies by the most famous of American private presses, the Grabhorn Press, in 1959, and is signed by the Grabhorns. $225.


Item 55 is a 10” x 7” fragment of a 19th century ream wrapper from Eureka Mills for 1st Class Commercial White Wove Ruled Note Paper. It is decorated with various type faces and traditional American symbols. A penciled note on the front provides the price – 8 cents per quire, 35 cents per package. A quire generally consists of 24 or 25 sheets. This wrapper comes with something extra special. On the back is a handwritten recipe for peach pudding from Carrie M. Streeter's household. $75.


Item 32 is a large collection from one of the more unusual of private presses, something of a legend. The Laboratory Press was established in 1924 at the Carnegie Institute of Technology. The purpose was to train students in typographical design and other issues concerned with operating a fine press. It was an odd marriage – instruction in fine press work at a technical school in an industrial city. Nonetheless, it was the first of its kind – a fine press devoted to education and instruction. The press was the brainchild of Porter Garnett, who headed up instruction and ran the press until he retired in 1935. It then closed down, though a later version reopened in the 1950s. This collection consists of specimens from 92 student projects between 1924 and 1933. They range from small pamphlets and books to large folders and broadsides. All were exercises in typographical design. They employed the best foundry types and were hand-printed on hand-made paper. The names of the designer and printer for each project is listed. $1,600.