Literary Firsts and Other Meritorious Books from Whitmore Rare Books 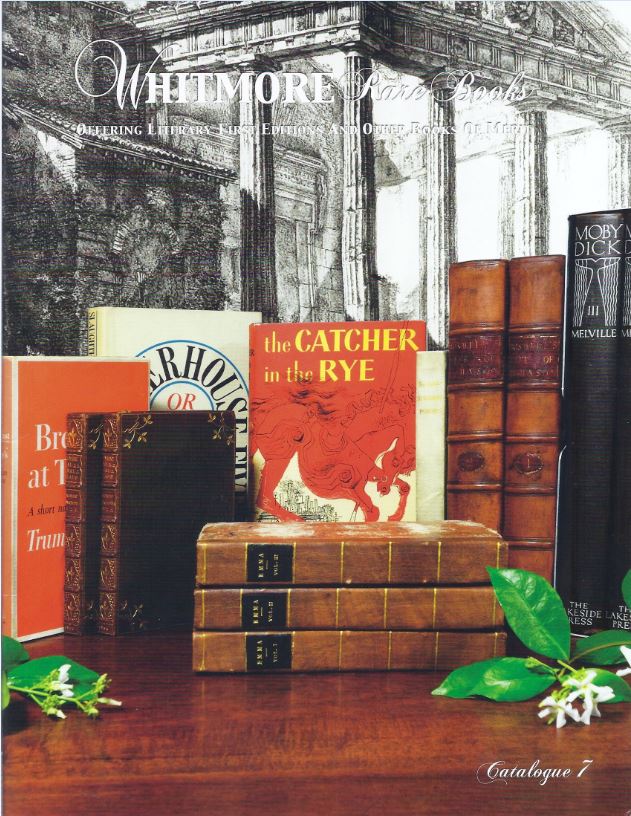 The latest from Whitmore Rare Books.

Whitmore Rare Books has issued their Catalogue 7. Whitmore specializes in “literary first editions and other books of merit.” In other words, literature predominates, but some other types of books and ephemeral material can sneak their way into the pages. That they have done, though literature in first editions remains the primary focus. Here are a few of the items you will find in their seventh catalogue.

The last shall be first, at least for this review. We start with the last of Jack Kerouac's novels published during his lifetime: Vanity of Duluoz. An Adventurous Education 1935-1946. As with others of his works, it is semi-autobiographical. This one is based on earlier years of his life. The years 1935-1946 would take him from the age of 13, through high school in Lowell, Massachusetts, and college at Columbia University. It ends just as the “Beat Generation” is beginning. The book was published in 1968, the year before Kerouac died. Item 28. Priced at $350.


Here is a book meant for a much younger audience. Then again, maybe not. Item 34 is More Very Young Songs, a 1928 first edition of songs with words by A.A. Milne and music by Harold Fraser-Simson. Illustrations were provided by Milne's regular Winnie-the-Pooh illustrator, Ernest H. Shepard. There are ten songs in the songbook. While this would seem appropriate for young children, this is an edition limited to 100 copies, signed by Milne, Shepard and Fraser-Simson. It seems unlikely that a purchaser would let any child get their hands on a copy of this edition. $1,000.


For those looking for a justification, or excuse for book collecting, there is Thomas Frognall Dibdin's Bibliomania; or Book Madness: A Bibliographical Romance, in Six Parts. This is the 1811 second “revised and enlarged” edition of the book first published in 1809. Dibdin was a book lover and obsessive collector, writing many books on the subject over the course of his life. He is, two hundred years later, still the epitome of a collector. This copy comes with an autographed note from the author. Item 8. $950.


We probably would not much remember Samuel Johnson if it weren't for James Boswell, nor Boswell but for Johnson. That is certainly a symbiotic relationship. Johnson was a notable lexicographer, creating the greatest English dictionary ever published at its time, the 18th century. Nevertheless, lexicographers aren't always all that interesting and we probably would not remember him except for this work by Boswell: The Life of Samuel Johnson, published in 1791. Johnson was evidently quite a wit, at least Boswell (and Johnson) thought so. Boswell was a great admirer, and also a great biographer. Consequently, Boswell is remembered for his exceptional biography, and Johnson for being its subject. This copy contains the written name “James Mansfield 1791,” presumably the noted jurist of the era, Sir James Mansfield. Item 2. $3,500.


Item 10 is the first book by famed aviatrix Amelia Earhart: 20 hrs. 40 min. Our Flight in the Friendship. Earhart was the first woman to cross the Atlantic by air, though her role was a mostly passive one. She was a passenger. The flight took place, and the book was published, in 1928, the year after Lindbergh made the first aerial ocean crossing. Despite her limited role, the flight made Earhart a celebrity. She would live up to her fame in 1932 when she became the first woman to fly a plane solo across the Atlantic. Five years later, the world would be watching her every move when Earhart became the first woman to attempt to fly around the world. She almost succeeded, her plane being lost over the Pacific on the trip's final leg. To this day no one is certain what happened to her, though theories abound. This copy is signed by Ms. Earhart. $2,250.