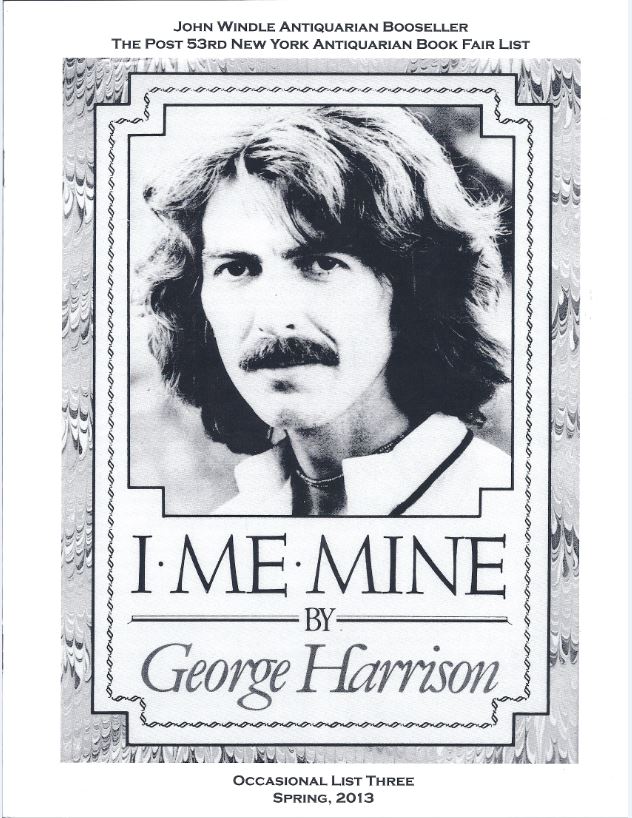 This is not a George Harrison catalogue despite the appearance of the cover. That is just one item. It is actually Occasional List Three from John Windle Antiquarian Bookseller, also known as The Post 53rd New York Antiquarian Book Fair List. We receive a lot of fair lists, but this is the first post-fair one I have seen. As to what is in a post-fair list, the answer is a little bit of everything. At least that's true of this one. There is something for everyone here. Let's take a look at a few examples.

Item 71 is an account of The History of the World. It spelled bad times for its author, Sir Walter Raleigh. Raleigh was a leader in the court of Queen Elizabeth. He is most noted for his visits to the New World, establishing the doomed but precedent setting colony in Roanoke, and bringing tobacco to England. He had a falling out with Queen Elizabeth when he married one of her ladies in waiting without her permission, but good relations were restored and he thrived during her rule. Unfortunately, not even Elizabeth lived forever, and he was not well liked by King James. He was accused of being in a plot against him and sent to the Tower of London, where he was imprisoned from 1603-1616. It was during this enforced vacation from other matters that he wrote this book. Published in 1614, it covered from biblical to Greek and Roman times. It was originally to carry through to modern times, but was never completed. King James was not fond of it, banning it for a while as being “too sawcie in censuring princes.” Though it covered times of many centuries earlier, the King believed Raleigh was drawing parallels to modern times. Raleigh was finally released to attempt to find a legendary city of gold in South America, but some of his men attacked the Spanish, who demanded James execute Raleigh for their action. James complied, perhaps seeing this as an opportunity to do away with him. Priced at $9,500.


That picture of George Harrison on the cover of this catalogue is from George Harrison's book I, Me, Mine. Published in 1980, you can probably guess what it is about. It is the closest thing to an autobiography of the most notable Beatle not named “John” or “Paul,” as he discusses many events and important things in his life. This copy is inscribed by Harrison to a friend. Item 40. $3,500.


Item 63 is a printed leaf announcing the sale of the library of the most noted of all fine press printers. William Morris, of the famed Kelmscott Press, died in 1896, and his library was turned over to Sotheran's to be sold as a complete collection. Morris' library was particularly strong in old manuscripts, around 110 in number, plus around 800 books, many illustrating early typography. This leaf, from 1896, is headed Announcement for the Sale of William Morris' Library. It continues, “For sale en block, the library of the late William Morris, consisting of his unrivalled collection of medieval manuscripts and printed books. Full particulars on application to Mssrs. Henry Sotheran & Co.” Reportedly, the library was purchased by a Manchester collector for £20,000, who kept what he wanted and sold the rest at Sotheby's in 1898 for £10,992. The leaf is priced at $100.


Benjamin Franklin was a many talented man – scientist, politician, printer, and certainly a great salesman. Item 34 is Constitutions de Treize Etats-Unis de l'Amerique, the constitutions of the 13 American states. This was published before there was a United States as we know it today, just the loosely confederated states of 1783, shortly after the formal peace treaty with England was ratified. This first edition in French also includes the Declaration of Independence, the Articles of Confederation, and peace treaties with France, Belgium, and Sweden. Franklin's purpose was to sell Europe on the virtues of America, both to forge friendships with foreign powers and to encourage European immigrants to come and help settle the new land. $4,750.


Item 75 is a biography of a most unusual man: Memoir of Richard Robert Jones, or Aberdaron... He was more commonly called Dick Aberdaron for his hometown. Dick was a beggar, a man abused as a boy who did not hold down a job. He suffered personal hygiene issues, also earning the nickname “Dirty Dick.” His clothes were ragged and worn. His formal education was limited, but Dick was nonetheless a self-taught man. He was a linguist. He knew some 12 to 15 languages, including ancient ones such as Hebrew and Greek, along with Arabic and Persian, Latin and numerous European languages. Oddly, he was said not to be very good with English, but perhaps that was because he was Welsh. Dick compiled a couple of inter-language dictionaries as he felt those available were inadequate, though his work was never published. He was said to excel in his understanding of the grammar of the languages he learned. It was also said that his knowledge was utterly useless, as he never taught or made other use of his extensive language skills. Mr. Jones at times was supported by those who befriended him, and that would include the author of this book published in 1822, the writer and historian William Roscoe. Dick outlived Roscoe, surviving to the age of 63 in 1843. $475.


John Windle Antiquarian Bookseller may be reached at 415-986-5826 or johnwindle@aol.com. The website is www.johnwindle.com.