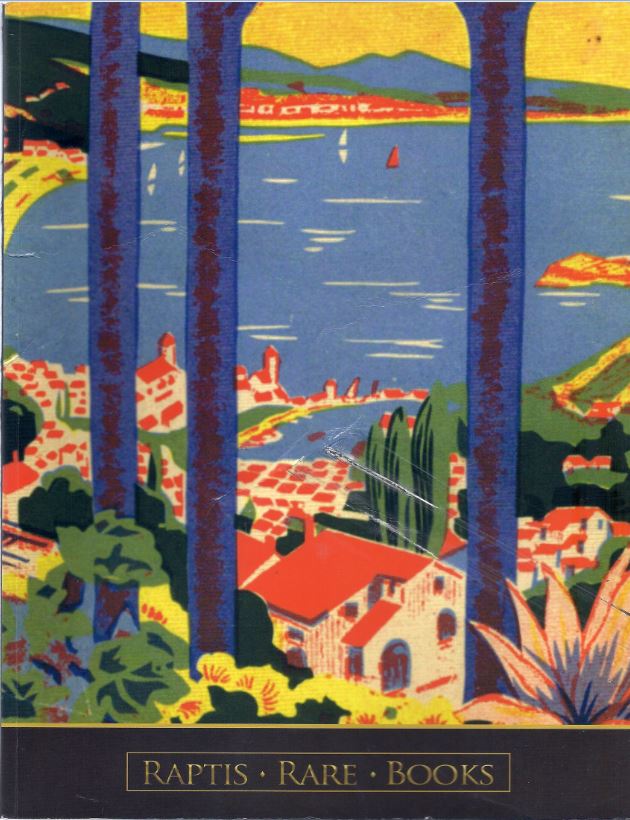 This month we received our first catalogue from Raptis Rare Books, of Brattleboro, Vermont. If it helps any, Brattleboro is close to southwestern New Hampshire and northwestern Massachusetts. It's also close to a lot of cows and maple trees. It's a great place to visit, particularly in the fall. Raptis Rare Books is operated by Matthew Raptis, a collector since the age of eight. No wonder children's books is among the type they offer, along with history, economics, science fiction, and most of all, literature. First editions predominate the selection, and exceptional condition is a major factor in what they carry. Exceptional service is also a major goal. Here are a few selections from Raptis Rare Books' fourth catalogue.

Since The Great Gatsby is once again the rage with the release of his latest film incarnation, we will start with the original, the first edition, first issue, published in 1925. This one is described as “a very fine copy in a very good first issue dust jacket.” Surprisingly enough, Gatsby, F. Scott Fitzgerald's third novel, was not a notable success at the time. His first had been more popular, and Fitzgerald made most of his money from short stories and film adaptations. Gatsby's greater success would come in the theaters, with periodic updates, such as that recently released, bringing in new generations of audiences. However, it is that success in the theaters that undoubtedly has helped make Gatsby one of the most collectible novels of the 20th century. This copy is particularly valuable because of the first issue dust jacket. The “celestial eyes” of the jacket is perhaps the most famous of any cover art. Fitzgerald was enthralled by it, actually writing it into the novel. Priced at $160,000.


We next move a decade forward, but stay with Scott Fitzgerald. In 1925, he was a young author, a success living it up in the jazz age. By 1935, he was struggling with the expenses of a lifestyle at times beyond his means, declining income, responsibility for a child, and his wife Zelda's psychological issues that would result in her being institutionalized most of the remainder of her life. His own health was burning out as well, his heart giving out just five years later at the age of 44. It is into this darkness that he published Taps at Reveille, his last collection of short stories, or any book for that matter, published during his lifetime. This copy is inscribed to Isabell Owens, “For Isabelle Owens / Hoping we'll both be able to look back to this winter as a bleak exception, in a business way / From F. Scott (“Old Scrooge”) Fitzgerald.” Owens was Fitzgerald's personal secretary during his years in Baltimore, from 1932-1936, and part-time after he left for Hollywood until his death in 1940. She typed the drafts of Tender Is the Night, his last novel published during his lifetime, as well as handling his correspondence, accounts, dealt with creditors, ran errands, babysat daughter Scottie, and was at times a companion to Zelda. The year 1935 was something of a bleak exception “in a business way,” as once Scott moved to Hollywood to become a screenwriter, his income rebounded substantially, but personally life did not improve. Both his health and Zelda's continued to deteriorate and screenwriting was not emotionally satisfying for him. $45,000.


This book may never be confused with those of Fitzgerald on a basis of literary merit, and yet it is one of the most collectible and valuable pieces of modern literature today – Casino Royale, by Ian Fleming. This is another book whose value is substantially enhanced by screen adaptations, not so much of this particular book, but of later titles in the series of James Bond thrillers. Casino Royale was the first, published in 1953, and this is the one that introduced us to Mr. Bond. Fleming's Bond novels were not an overnight success, but their popularity grew through the 1950s. However, it was not until the Bond films began to be released a decade later that secret agent 007 achieved the astronomical popularity he retains to this day. $47,500.