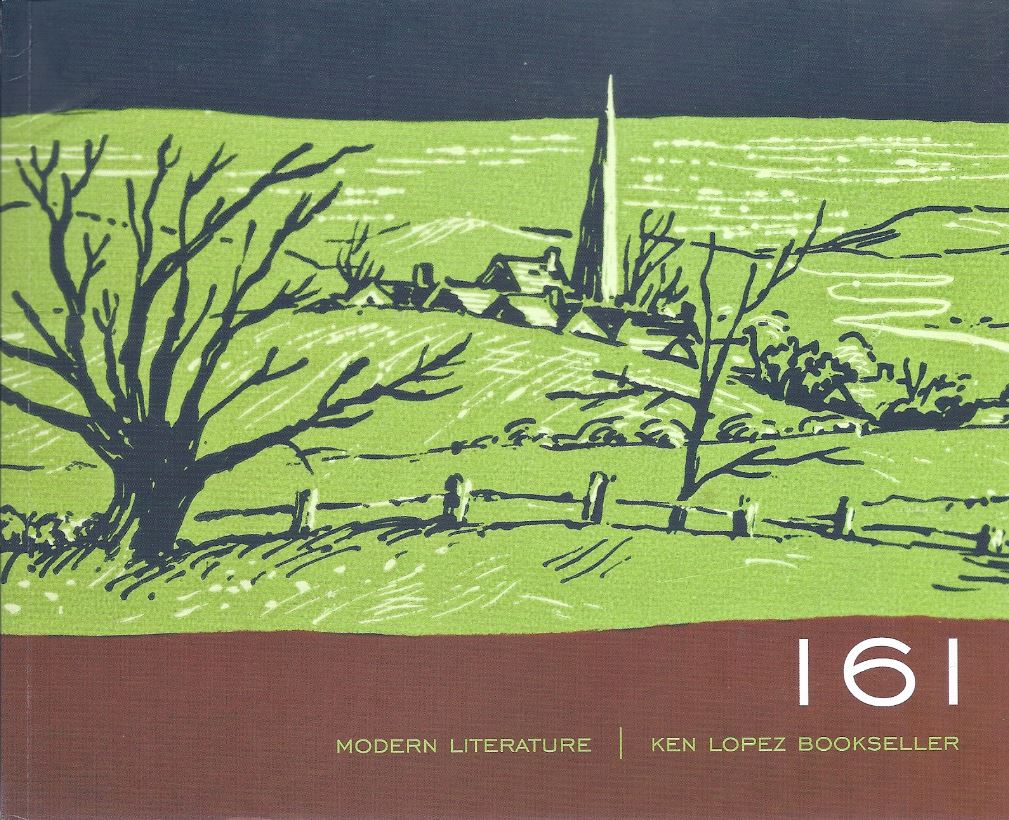 Ken Lopez Bookseller has released his catalogue number 161 of Modern Literature. Offered is a collection of first editions of books along with some ephemeral material, such as letters and photographs. Being modern, most items are from the 20th century, but a few are even more modern than that. You will find many of the most noted of authors of the past century here, with a concentration in the last 50 or 60 years. And, while this is mainly a catalogue of literature, not everything in these pages is fiction. Rules are meant to have exceptions. Here are some samples.

We will start with item number 1, an important work in the environmental movement, though a piece of fiction. Edward Abbey was an environmentalist, a man with not much use for business interests or the government. He would have been more at home in the West of the mountain man era, when the hand of neither government nor industry polluted the landscape. In 1975 he published The Monkey Wrench Gang. It is about a gang of environmental activists who seek to disrupt the destruction of the West, targeting heavy equipment and such used in the process. Their particular target is the Glen Canyon Dam, a massive structure completed in 1963 that turned a large section of that canyon, formed by the Colorado River in Utah, into a huge man-made lake. Many would still like to see the dam disappear, though not through such extra-legal methods. This copy has been inscribed by Abbey “for Ron [Kezar] from Ed Abbey Glen Canyon Damn 1981.” That inscription lets Abbey's continuing thoughts about the Glen Canyon Dam be known. Kezar was a founder of the radical environmental group Earth First!. Priced at $2,500.


Item 124 is Eliot Porter's “photographic elegy” for the aforementioned Glen Canyon. Published in 1963, the year the dam was completed and Glen Canyon buried beneath an artificial lake, the title is The Place No One Knew. Glen Canyon on the Colorado. Certainly it was a place few knew, one of the last areas in the lower 48 states to be explored. It contains 72 color plates of the canyon by Porter with captions by notable writers such as Loren Eiseley and Wallace Stegner. The foreword by David Brower begins, “Glen Canyon died in 1963 and I was partly responsible for its needless death. So were you.” Brower was then head of the Sierra Club, and focused on preventing a similar dam of the Green and Yampa Rivers in Dinosaur National Monument, took his eye off of Glen Canyon. This copy previously belonged to singer-actress-author and dedicated environmentalist Katie Lee, a friend of Brower and one who had traveled the canyon before it was flooded and vigorously opposed the damming. It contains many of her handwritten notes. $1,500.


Here is another writer from the West, and one whose rebellion against any authority reminds us of Abbey - Hunter S. Thompson. Item 161 is a remarkable 6-page letter from the man who made “fear and loathing” a common expression. It is dated December 16, 1966, the dawn of his writing career. The recipient was Richard Elman, a writer a bit more advanced in his career than Thompson at this time. Thompson had shown Elman the manuscript of his first book, Hell's Angels, and being impressed, Elman had brought the manuscript to the attention of his publisher, leading to Thompson's signing by Random House. Evidently, the publisher was not doing a good enough job promoting Elman's book, The Poorhouse State, and Thompson, in his inimical way, attacks Random House for its “rotten & inexcusable” failure. However, Thompson also notes that he has to tread lightly since “My entire financial future hangs in the balance.” He does not want his book, Hell's Angels, blacklisted, so Thompson says he is limited to mailing off copies of Elman's book to promote it. The letter is signed “HST.” $10,000.