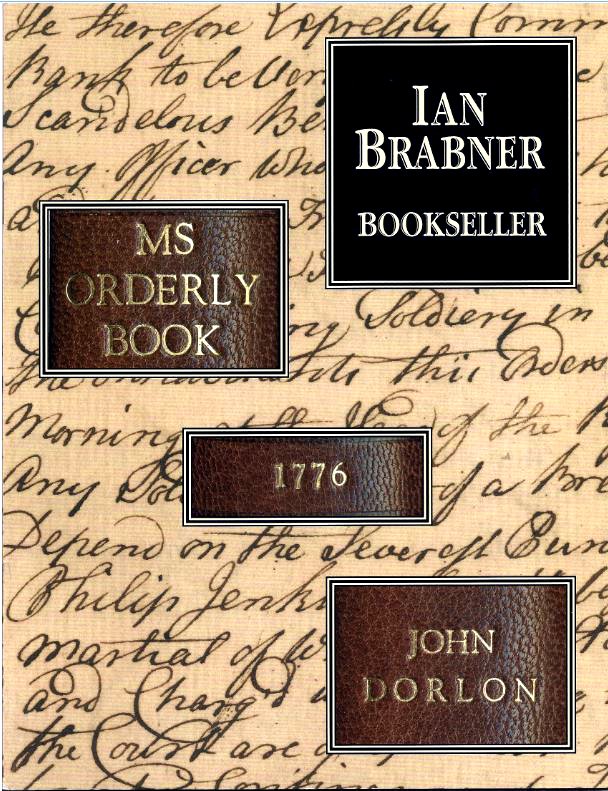 The orderly book of John Dorlon.

Some catalogues we receive contain over a thousand items. Some not so many. None contain fewer than this. Ian Brabner, Bookseller, has issued a catalogue of one item. No concern with not being able to find the one you are looking for in this catalogue. Offered is a manuscript Orderly Book compiled in early 1776 by John Dorlon. John Dorlan was a captain in New York's Second Regiment of Minutemen, a 43-man unit out of Duchess County (later home of Franklin D. Roosevelt). They would be based in Manhattan, near Trinity Church and Wall Street.

The book accounts instructions received at a time shortly before the colonies declared their independence. Troubles had long been brewing in Boston, and the Americans had already made an unsuccessful assault on Canada, but in New York, particularly in the city, loyalties were not clear. Many remained loyal to Britain. Dorlan was not such a person.


On the 7th of March, we learn that the Continental Congress had ordered General Charles Lee, under whom Dorlan's regiment served, south. He was replaced by the “Earl of Stirling.” Lee, who vied for leadership of the entire army with Washington, would later be court-martialed for insubordination, relieved of his duties, and fairly well disgraced. William Alexander, Lord Stirling, would be recognized for great bravery and devoted service.


On March 13, Dorlon notes that fortifications are to be built. Instead of guns, they will be marching with “spades, shovels, pickaxes and hoes.” All “mail” (Dorlon had some spelling issues) Negroes are also to participate. He goes on to note that “one half the In Habitance” are to be working every other day, while all slaves are to work everyday until the defense is complete.


On March 31, it has been learned that the British are evacuating Boston. Defenders in New York are put on notice - “That New York may be their Object The General Strongly recommends to the Officers of all Ranks to Excert themselves in Preparing for the most Vigorous Defences Should the Enemy attempt Landing in this Place.”


We regularly hear about the First, Second, Fourth, and Fifth Amendments in the Bill of Rights. How about the one in between – the Third? You probably have to look it up. It was a big issue at the time, but one rarely encountered any more. It protects citizens from having soldiers quartered in their homes, never to be done during peacetime, during war only as proscribed by law. This was a major issue at the time as the British had forced residents of Boston to quarter their soldiers, with little regard for how the Bostonians felt. Therefore, on March 28, we read the order, “The General expects & requires that the Greatest Care be Taken by the Officers Of the Different Corps to prevent their soldiers from Doing any injury to the houses in which they are Quartered...a Subaltern officer of each Company is Ordered once a Day to inspect the Lodgings of their men and if any Damage Is Done to the houses or furniture to Report the Delinquents that they May be Severely Punished...”


Soldiers were expected to be on good behavior. On April 11 Dorlon writes, “Notwithstanding Repeated Orders that the officers of Every Rank should take particular care that no Insults be offered The Inhabitants by the Soldiers the General has had repeated Complaints that the Ladies in Walking the Streets are frequently Insulted.” Soldiers will be soldiers. The result is that officers are “to be very attentive in Suppressing the Scandelous Behavoier.” This order is to be read every morning, lest the soldiers forget, and both soldiers and their officers are to be punished for disobedience.


A notation is written on the first leaf that Capt. John Dorlon died in Virginia on May 22, 1824.