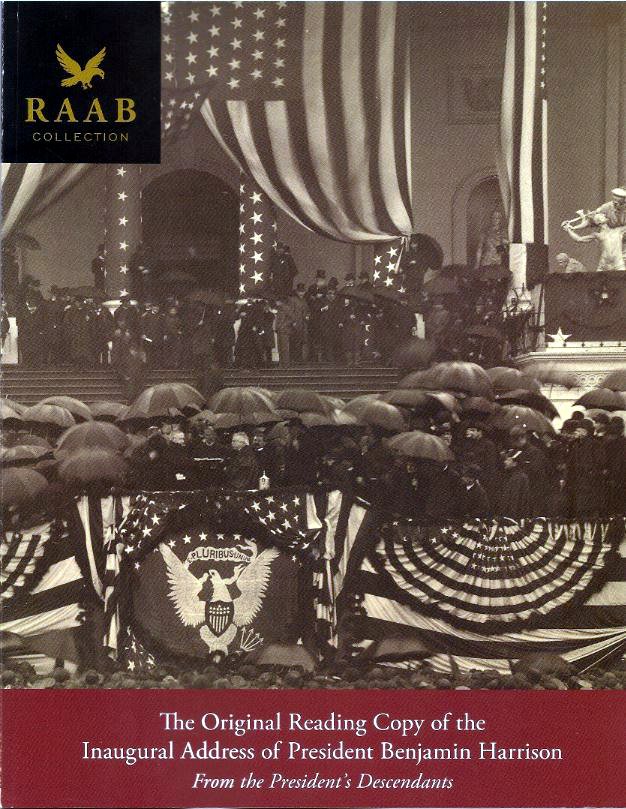 President Benjamin Harrison takes oath of office in the rain.

The latest from the Raab Collection is almost a one-piece catalogue. It does have six other items, but 16 of its 18 pages are devoted to a one-of-a-kind rarity - The Original Reading Copy of the Inaugural Address of President Benjamin Harrison. Raab notes that they are unaware of reading copies of any other inaugural addresses still in private hands.

Harrison was the scion of one of the most important political families of America's first century. It is one of but three immediate families (along with the Adams and Bushs) to produce multiple U.S. presidents. He was the namesake of another Benjamin Harrison, his great-grandfather, an important Virginia political leader at the time of the Revolution, a member of the Continental Congress, signer of the Declaration of Independence, and later Governor of the state. However, even he was only Benjamin Harrison V, numbers III and IV having been colonial Virginia leaders. With that background, it is fitting that President Benjamin Harrison took office on the centennial of George Washington first assuming the presidency. The date was March 4, 1889.


Benjamin Harrison was also the grandson of a President, William Henry Harrison. That ancestor was known by the sobriquet of “Tippecanoe” for his victory over the Indian Chief Tecumseh in that battle. His presidency was likely the least accomplished of any in American history, but that was not his fault. President William Henry (not Benjamin) is the one famous for giving the longest inaugural address in history, outside in the biting cold of Washington, becoming ill, and dying only 30 days after taking office. Benjamin Harrison also gave this inaugural address outside on a rainy day, but had the good sense to keep his speech brief, while his defeated opponent, Grover Cleveland, held an umbrella over his head.


Benjamin Harrison's inaugural address was noted as one of the most eloquent of the 19th century. The beginning and closing paragraphs express high-minded principles, while the center is focused on the issues of the day. Perhaps the most notable had to do with tariffs. Ultimately, it would be Harrison's downfall when he sought reelection in 1892. Tariffs had been a bone of contention between North and South since the time of the nullification crisis of the 1830s, when South Carolina almost seceded over the imposition of heavy tariffs. The South felt tariffs supported northern industries at the expense of southern agriculture, which saw little benefit from tariffs on foreign goods. All they saw, in their opinion, was reciprocal tariffs placed on their agricultural exports and increased costs on imported goods.


Harrison supported heavy protective tariffs, and attempted to use his inaugural address to convince the South they were beneficial to their region as well. “The sectional element has happily been eliminated from the tariffs discussion,” Harrison intoned, somewhat optimistically. He explains that by encouraging the South to build industries supporting its agricultural and mining activities, it too can benefit from industrialization. This led to another of Harrison's more optimistic, and highly principled ideals. He asks, “Shall the prejudices and paralysis of slavery continue to hang upon the skirts of progress? How long will those who rejoice that slavery no longer exists cherish or tolerate the incapacities it put upon their communities?” He believed that the need for labor in the new manufacturing facilities created as a response to high tariffs would serve “as a potent influence in the perfect unification of our people.” Blacks would become equal participants in the South's revitalization. He really didn't understand the South that well. Harrison deserves credit for promoting civil rights legislation, the last President who would do so for many years. However, he was not the strongest of presidents and was unable to get such legislation through Congress.


There is much irony considering today's issues in Harrison's tariff positions. The problem was that these taxes were raising too much money. “While a Treasury surplus is not the greatest evil,” he said, “it is a serious evil.” Imagine, the government raising more money than it can spend! Harrison's view was not to reduce tariffs, as they were imposed to protect American industry, rather than to raise money. Instead, he advocated more being spent on internal improvements. Harrison was a Republican, and it is certainly ironic now to see a Republican president promoting higher taxes and increased government spending.


Immigration was also an issue in Harrison's time, this being the era of massive immigration from Europe. Harrison favors it, but believes more should be done to screen out undesirables, and citizenship should not be granted to those who do not first acquaint themselves with its duties. Not wanting his position to come across as favoring certain ethnic groups over others, Harrison states, “there are men of all races, even the best, whose coming is necessarily a burden upon our public revenues or a threat to social order.”


Harrison might be called the “Education President” as he was a strong proponent of public education. He believed this would improve the quality of life of the nation's people as well as its economic strength. Harrison also felt that education would improve the condition of blacks and integrate them into American society. “At least until the good offices of kindness and education have been fairly tried the contrary conclusion can not be plausibly urged.”