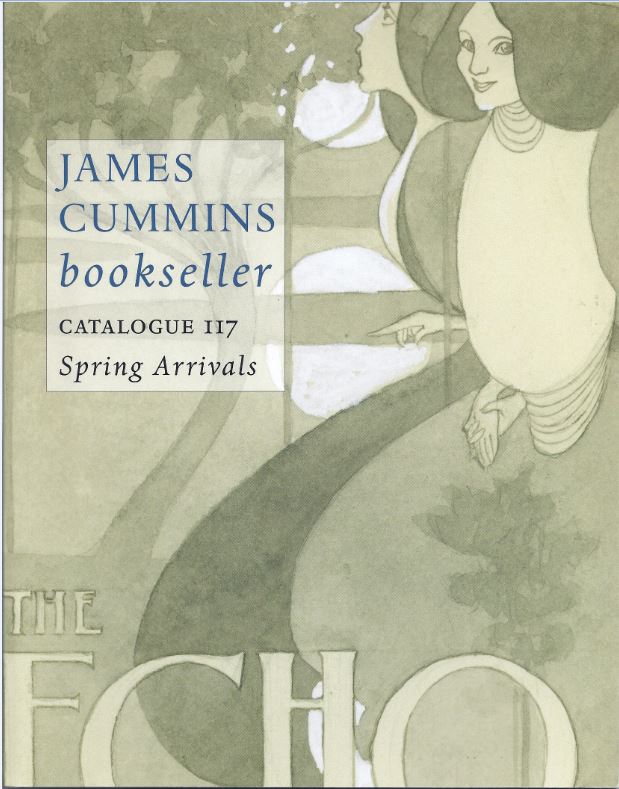 Will H. Bradley art on the cover of Cummins' Catalogue 117.

The latest from James Cummins Bookseller, Catalogue 117, comes with the title Spring Arrivals. What has arrived is a variety of material, what you might call a “miscellany.” As such, it is hard to describe, so instead, we will proceed immediately to a few samples of the items to be found this time around.

When Lewis and Clark set out on their journey to explore the newly acquired Louisiana Territory, they didn't have a lot of information they could access. It was uncharted territory. One resource they did consult was this item - Travels Through the Interior Parts of North America in the years 1766, 1767, and 1768. Author Jonathan Carver hoped to find a passage to the Pacific, but that was a journey too far. Nonetheless, he penetrated further west than any other Englishman in the days prior to the American Revolution. Carver tried to find a water passage, traversing the Great Lakes and then traveling toward the head of the Mississippi in what was then thought of as the Northwest. From there he proceeded up the St. Pierre (now Minnesota) River to where it forms the border between Minnesota and the Dakotas before turning back. We now know he still had a long way to go. Carver did return with tales from the Indians he met of a great mountain range to the west, which proved to be correct, and the belief that from the other side rivers flowed to the Pacific. Item 17 is a third and “best” edition from 1781. This edition includes a biography of Carver and a colored plate of a tobacco plant not present in earlier editions. Priced at $6,000.


That image you see on this catalogue's cover is from the original watercolor art by Will H. Bradley for a poster for The Echo magazine. Bradley is known as “the foremost American Art Nouveau designer of his time.” He is particularly known for his poster art. At this time, Bradley was a very busy man. He was providing artwork for his own periodical as well The Echo. This publication was described as a “humorous and artistic fortnightly,” and promoted as “Chicago's new paper – in which will appear a series of colored frontispieces by Will H. Bradley.” It ran from 1895-97. Apparently all of this work became too much for Bradley, who had a breakdown and sold his press. Fortunately, the effects weren't permanent as he went on to live to be 94. While Bradley was a prolific artist, Cummins notes that his original artwork is extremely rare on the market. Item 11 includes not only the original art, but an original lithograph poster advertisement for The Echo based on Bradley's drawing. $18,500.


“The only thing we have to fear is fear itself.” That is one of those iconic lines, taken from Franklin Roosevelt's first inaugural speech, probably better known than any inaugural quote except maybe Kennedy's “ask not.” Item 48 is the Inaugural Address of Franklin D. Roosevelt President of the United States, delivered on March 4, 1933. Actually, it's not quite as delivered, but close. This is an advance copy, and one of a small number printed on large paper. It was bound in blue cloth. This copy is signed by Eleanor Roosevelt Roach, daughter of Eleanor Roosevelt's brother Hall. Roosevelt planned to read the speech from a printed copy, but at the last minute decided to use a typewritten copy with a few hand corrections he had made. That is why this copy is slightly different from the actual address and later copies of it which incorporated Roosevelt's changes. In his address, Roosevelt states his intention to ask Congress for broad powers to attack the economic crisis, the Great Depression, which resulted in an unemployment rate of 25% at this time (we think we have troubles now!). That would be a promise Roosevelt would quickly carry out once he took office. Item 48. $22,500.


Here is a classic with some archaic spelling: Treatyse on Fysshynge with an Angle. This book was originally printed by Wynkyn de Worde in 1496, but this is the 1903 fine press edition by Charles Henry St. John Hornby's Ashendene Press. The book is attributed to Dame Juliana Berners, though no one is certain she wrote it, or that she even existed for that matter. If she did, she enjoyed fishing, and among the illustrations is one of a woman, we presume Dame Juliana, pole in hand, fish at the end of her line. Ashendene re-cut woodcuts of the original illustrations from the 1496 edition. Item 2. $2,500.