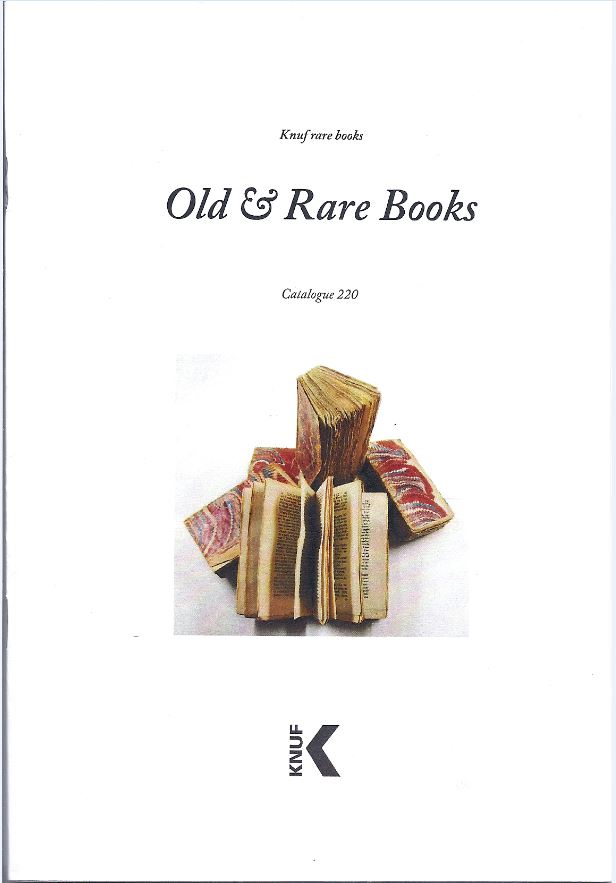 KnufRareBooks has released Catalogue220, a varied collection of works from the French bookseller. Most items fall into the broad books about books or artistic books categories. That would cover such areas as specimen books, calligraphy, and a large number of library auction catalogues from very long ago. On the more artistic side, we find subjects such as architecture, gardens, and several concerning the designs of fireplaces and chimneys. They were quite elegant, at least among the monied classes, at the time when they provided the sole source of heat in the winter. Here are a few samples of what Knuf Rare Books has to offer.

Giuseppe Renato Imperiali was born of a prosperous, highly respected family from Genoa in 1651. His great uncle, who had been both a political force and a Cardinal, promoted his education and career. He held several offices within the Church, being selected as a Cardinal in 1690. Over the next forty years, he continued in varied important posts. Among those were responsibilities for the commissioning of many public works. At the papal conclave of 1730, Imperiali, though pushing 80 years of age, was the leading contender for Pope, coming within one vote of being selected. However, in those days, the Spanish King held a veto over popes, and put a damper on Imperiali's selection. He remained in his other posts until his death in 1737. Along the way, Cardinal Imperiali amassed a library. By 1711, his library had reached 20,000 volumes. That was the year in which his librarian, Giuseppe Renato Fontanini, compiled this catalogue: Bibliothecae Josephi Renati Imperialis...Catalogus... It provides listings alphabetically by author and by subject. Item 27. Priced at $4,600.

Item 14 is the catalogue for an auction that never took place: Catalogue des Livres du Cabinet de M. de Boze. Claude Gros de Boze was a major French collector who died in 1753. That year, his books were put up for auction. They consisted of over 2,700 items, including a Gutenberg Bible. However, the auction never happened. Two collectors, Jules Francois de Cotte and Charles Robert Boutin, put in a bid and obtained the entire collection ahead of the auction. They made a fine deal. They kept the items they wanted, sold most of the older books to Louis-Jean Gaignat for almost as much as they paid for the entire collection, and put the remainder, roughly half of the books, up for auction the following year. Meanwhile, Gaignat spun off what he purchased to another collector for a tidy profit. $1,200.

Item 15 is the catalogue for the remainder of the De Boze collection, sold the following year - 1754. This sale was conducted by Gabriel Martin in Paris. This auction catalogue, headed Catalogue des livres provenans de la bibliothéque de feu M. deBoze... included the Gutenberg. $2,300.

Item 60 is a catalogue for an auction of ancient Chinese and Japanese porcelain artworks. It is not the works or auction that makes this catalogue curious. Rather, it is the circumstances. The collection was owned by Victor Poinsot, a high French judge, who died in 1860. He did not pass away gently. It was one of the most sensational murder cases of the era. Poinsot was returning by train to Paris from a vacation. He had been resting in his private first-class compartment when he was discovered at a train stop, in a pool of blood. He had been shot in the head and chest, his head bludgeoned. His money, a gold watch, and a traveling rug were stolen. Despite the thefts, officials were suspicious of that as the cause, figuring the violence of the murder pointed to more personal motives. Nonetheless, the only man ever arrested was one Charles Jud, who had supposedly committed another such railway killing. Jud escaped custody and was never heard from again. Rumors swirled that Poinsot had carried on an affair with a young girl during his vacation and the killing was revenge by her brother. Others saw even more sinister motives of spying and intrigue. What exactly happened remains unknown, but we do know the following year, 1861, Poinsot's collection went up for sale. Here is the catalogue: Notice de Porcelain sanciennes de Chine & du Japon...dependant de la succession de feu M. Poinsot... Poinsot's murder on a train was part of the inspiration for Emile Zola's book, La Bete Humaine (the Human Beast). $420.