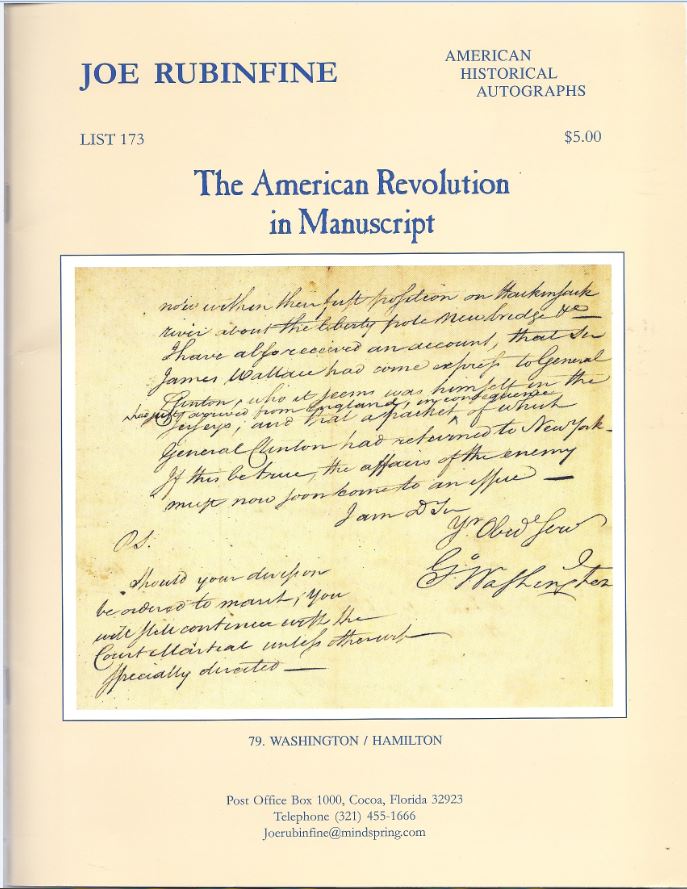 Manuscripts from the American Revolution.

Joe Rubinfine has published a catalogue entitled The American Revolution in Manuscript. While the Revolution was much more than a war of words, it was through handwritten words that the news of events was relayed. This collection is filled with accounts as they happened, mostly from officers who participated in its battles, or political leaders who planned strategy. They range from the lesser known officers whose roles were nonetheless important to the cause's success, to the highest ranking of leaders, George Washington himself. This was a time of great sacrifice, but ultimately great triumph. Here is a look back at those days in the words of the participants.

Item 23 is a document signed by British General James Grant, dated December 13, 1776. It proclaims, “I do Certifie that the Bearer John Carter has taken the oath agreeable to the Proclamation of 30th Novr. 1776.” That proclamation was Sir William Howe's offer of amnesty and pardon to everyone who swore allegiance to the King. This offer was part of England's attempt to pacify New Jersey. These documents are scarce, and Rubinfine has a likely explanation. Once the tide of the war turned the other way, it is unlikely that many of those who signed up would have wanted to possess these things any longer. They probably quietly found their way to the fireplace. Priced at $2,500.


Speaking of switching sides, no one is more the epitome of a side-switching double crosser than Benedict Arnold. A prickly, vain, and greedy man, he was nonetheless brave in combat and a successful leader for the patriots in the early years of the Revolution. His personality turned many of his fellow leaders against him even before he became a turncoat, but his success in the field retained one strong advocate in his corner – George Washington. It helped him survive long enough to be caught in the act. Item 1 is a muster roll for the First Pennsylvania Regiment dated December 9, 1778. It is signed by Arnold and several other officers, including Col. Lewis Nicola. Nicola is the officer who wrote Washington suggesting he become King of America, to which the General replied in a most emphatic negative. Washington had appointed Arnold as commander of Philadelphia earlier that year, and Arnold had begun using his position to advance his financial self-interest. This would in turn lead to conflicts with others, more resentment from the ever-resentful Arnold, and his selling out his country. At the time of this letter, it is likely that Arnold had begun to consider his options as he was already lamenting the condition of the country, as well as his own, though it is unlikely he would have taken any action yet or fully made up his mind. $17,500.


By the time of this letter, June 8, 1780, Arnold was already deep into spying. He was still in Philadelphia, angrier than ever. He had been court-martialed for financial actions, though his treason was still unknown. He was now under consideration for command at West Point, which would come in less than two months, and he was about to travel to Connecticut to sell his home, a means of converting assets to cash he could then send to England. This letter is to Philadelphia printer David Claypoole, and it is filled with treasonous irony. Arnold tells Claypoole he will receive some proofs from General Washington, which he should seal up as soon as printed, “& use every precaution to prevent their being made Public...” Arnold should have taken such precautions himself. What was being printed was a notice to French Canadians to be prepared for a French-American invasion of Canada. While pretending to preserve their secrecy, Arnold had already informed the British in New York of the planned attack. What not even Arnold realized was that this “attack” was just a ruse meant to divert British resources away from the real action. Item 2. $22,500.