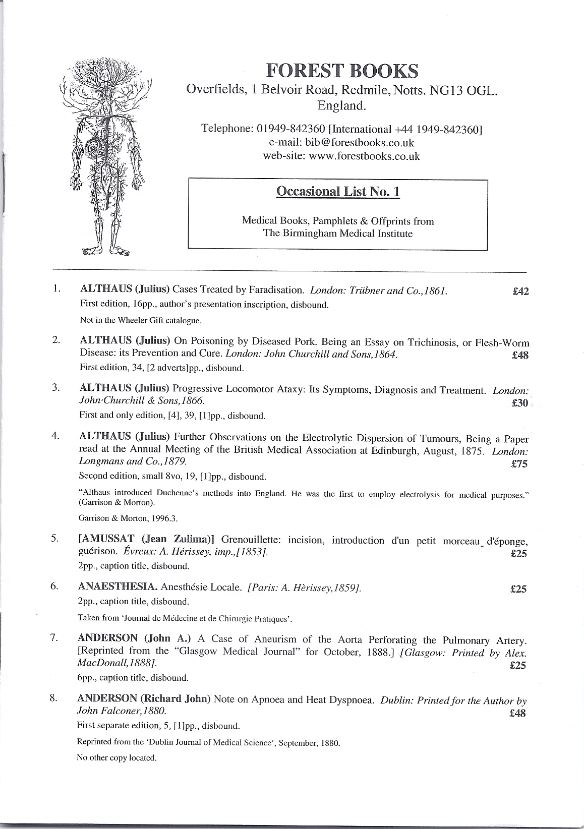 Forest Books has issued what obviously is a first: Occasional List No. 1. It is subheaded Medical Books, Pamphlets & Offprints from The Birmingham Medical Institute. The Birmingham Medical Institute was founded in 1875 as a medical library. Many of these pieces must have been on their shelves when it opened as they primarily come from the second half of the 19th century, some are as early as 30 years prior to the opening. According to the institute's website, many of the early books were donated to them by doctors. Later books were more likely purchased.

These titles were undoubtedly deaccessioned due to their age. They may have provided the latest techniques in medical practice in the 19th century, but few would want to visit a doctor who relied on them today. Certainly, these were serious medical treatises in their day. These are not promotions for patent medicines, or amateur or quack medical tracts often published during this era by people with no legitimate training. The Birmingham Institute was obtaining the best research available in its day, but by current standards, much would be primitive, other beliefs just plain mistaken. They may no longer be appropriate for a library used to educate doctors, but belong in one designed to preserve and teach about the history of medicine. Here are a few of these items.


One of the most important advances ever in surgery was beginning to take place in the middle of the 19th century, though some thought it was killing people. Today, it is hard to imagine going under the knife without it – anesthesia. In the 1840s, physicians had begun to use chloroform as well as ether for the first time to knock out their patients during surgery. Both greatly reduced pain, but chloroform had the unwanted side effect of killing too many patients. Dr. James Arnott did a study of hospital patients and published the results in 1854 under the title, The Question Considered; Is it Justifiable to Administer Chloroform in Surgical Operations, After Its Having Proved Suddenly Fatal in Upwards of Fifty Cases, when Pain Can be Safely Prevented, Without Loss of Consciousness, by Momentary Benumbing Cold? Dr. Arnott's answer is obvious from the way he phrased the question. Of course it is not justifiable if there is a safe alternative, but others questioned his conclusions. Chloroform is very dangerous if not properly administered, but research by others found substantially lower fatality rates with careful administration. Meanwhile, the use of numbing cold proved difficult in many surgeries, particularly deep ones. Ultimately, ether became the anesthesia of choice through the 19th century and much of the 20th. Item 12. Priced at £42 (British pounds, or roughly $63 U.S. dollars).

If you are looking for a proven cure for asthma, you won't find many with better results than those described here, even if the cure might sound worse than the disease: Cases of Asthma Nervosum, Successfully and Permanently Cured with Arsenic-Inhalations and Galvanisation of the Pneumogastric Nerves. Dr. Adolphe Wahltuch of Manchester (England) applied this dual therapy to seven patients, two of whom experienced major improvement, the other five complete cures. Basically, the cure was to sniff arsenic and run some electricity through electrodes attached to your neck. After a few months of this, voila... you're cured! Who knew? Obviously Dr. Wahltuch knew, but this cure appears to have been forgotten in the years since. Item 181. Published in 1883. £35 (US $52).

Item 149 is sweeter than sugar, 300 times sweeter to be precise, though its source does not sound all that appetizing: Saccharine: The New Sweet Product from Coal-tar. 300 Times the Sweetening Power of Cane Sugar. A Powerful Antiseptic. Absolutely Non-fermenting. Positively Harmless to the Human System. Would you like some coal tar in your coffee? The artificial sweetener had only been discovered by Dr. C. Fahlberg less than a decade earlier than his description, published in 1887. Apparently he had been performing some chemical experiments when he realized the substance on his hands was extremely sweet. He would go on to produce and market the substance, which has been used for sweetening food ever since. However, it would not reach widespread popularity until the 1950s, when dieting became a craze. In the 1970s, use plummeted and in some cases it was banned when it was determined to cause cancer in laboratory rats. Further studies later revealed that the cancer caused in rats resulted from specific physical issues of rodents that are dissimilar to humans and once again, as Dr Fahlberg had stated so many years ago, it was found that “it is positively harmless to the human system” (it should be pointed out that Dr. Fahlberg never claimed it was positively harmless to rats). Saccharine is readily available again, but it still leaves an unpleasant aftertaste. £45 (US $68).

It was “discovered” at one point that ozonized oils were good for one's health, supposedly slowing the pulse while not weakening it. Apparently this is good for restoring health. Well, if ozonized oil will cure diseases, what could be better than ozonizing the most healthy oil of all? That is what was done, and explained in this 1861 pamphlet written by one “E.E.A.”: Ozonized Cod-liver Oil and Its Medicinal Administration, Especially in Consumption. Ozonized cod liver oil was supposed to be very good for the skin, but this claim was even more important. Curing “consumption,” which most often meant tuberculosis, was a major challenge in the 19th century. It was one of those dreaded diseases that killed millions before the discovery of antibiotics. Alas, this remedy was not the answer, though the sale of this concoction obviously was the answer to some producer's financial woes. Item 43. £45 (US $68).

If ozonized cod liver oil wasn't your cup of tea, how about etherized cod liver oil? That was Balthazar Walter Foster's recommendation in On the use of Ether and Etherised Cod-Liver Oil in the Treatment of Phthisis, published in 1868. “Phthisis” was another term for tuberculosis no longer used today, probably because no one could figure out how to pronounce it. This copy contains the author's presentation inscription. While Foster's confidence in ether was somewhat misplaced, he was a legitimate and well-respected physician and researcher. Later, he served several terms as an M.P. where he promoted public health measures and education and housing for the poor. Item 70. £40 (US $61).