Historic Maps from Cohen and Taliaferro 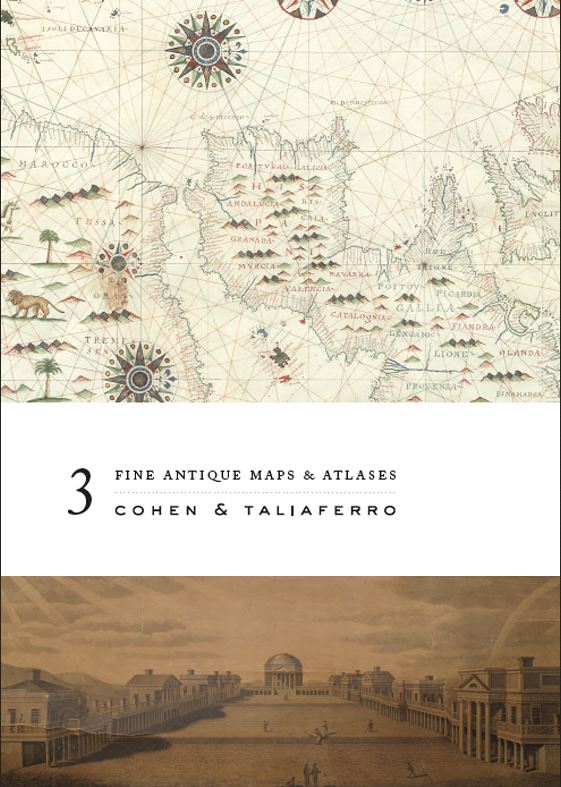 Recently released is Catalogue 3 of Fine Antique Maps & Atlases from Cohen & Taliaferro of New York City. Offered is a selection that includes some of the most important and historic of early maps, ranging to some more localized ones from the 19th century. Included are some of the very earliest to depict America. These are a few of the spectacular maps being offered.

In the decade before Columbus, European understanding of the world, at least from a mapping perspective, was virtually unchanged from where it been almost 1,500 years earlier. That is when the Alexandrian geographer/astronomer/mathematician Ptolemy produced his maps. We start with the map of the world taken from the Ulm Ptolemy, the second state of the atlas published in 1486. By the 1480s, there was more awareness of Greenland and Scandinavia, and Portuguese travelers had discovered some islands off the west coast of Africa, but otherwise the world was still essentially as Ptolemy had known it in the first and second century. In this map, only the northern part of Africa is shown, Asia ends slightly east of India. A bridge of land to the south connects Africa with Asia, making the Indian ocean an inland sea. There is no Pacific Ocean, poles, Australia, nor, of course, America. It was a small world in 1486. The map is surrounded by wind heads, a common element of antiquarian maps, and features contemporary color. Item 2. Priced at $165,000.


Item 3 offers one of the earliest maps to depict America, probably within about a year of the first such printed map. It was produced in 1507 by Johann Ruysch, who may have traveled to the New World himself. However, he likely saw America as part of Asia. North America is clearly attached to Asia (as is Greenland), though South America is less certain. Ruysch speculates that Spagnola (Hispaniola) is Marco Polo's Spangu, or Japan. Africa is now complete, looking very much as it does today, reflecting Bartholomew Diaz' 1488 journey around the southern tip of the continent. $265,000.


Item 5 is the 1513 Martin Waldseemuller map of the world from the Strasbourg Ptolemy. This is the first map to show America clearly separate from Asia, and is possibly even the first map to show the New World at all. It is often referred to as “The Admiral's map” because it refers to “the Admiral,” believed to be Columbus, though the map was not prepared by Columbus. A large part of South America appears in the southwestern corner, along with the islands of Hispaniola and Cuba, though North America is not displayed. Asia clearly ends on the eastern side of the map, revealing an ocean that separates it from the New World. While the map appeared in 1513, there is a case to be made, based on an earlier proof state and the fact that the map was not correctly sized for the atlas, that it may have been printed in 1505 or 1506 but not used until inserted in the 1513 atlas. If so, it would be the first printed map to display America. $95,000.


That 1513 atlas also included the first separate map of America, also by Martin Waldseemuller. This one not only contains more detail than the world map, but also shows North America, though clearly attached to the South and by more than a narrow isthmus. Cuba and Hispaniola (“Isabella” and “Spagnolla”) are shown in detail, but what is more interesting is the fairly accurate portrayal of Florida and the Gulf of Mexico. How did Waldseemuller know about this? These features had not yet been discovered. It has led many to presume there must have been some unrecorded voyages to which Waldseemuller had access. Item 34. $95,000.


Item 35 is Jean Lattré's 1784 map of the United States, Carte des Etats Unis de L'Amerique... It is most notable as being the first map of the United States. Certainly, there were many maps of the land before that, but this French map was the first issued after the final ratification of the Treaty of Paris, which made the United States officially an independent country. The map not only depicts the country but contains a list of important events in the Revolution. $38,000.