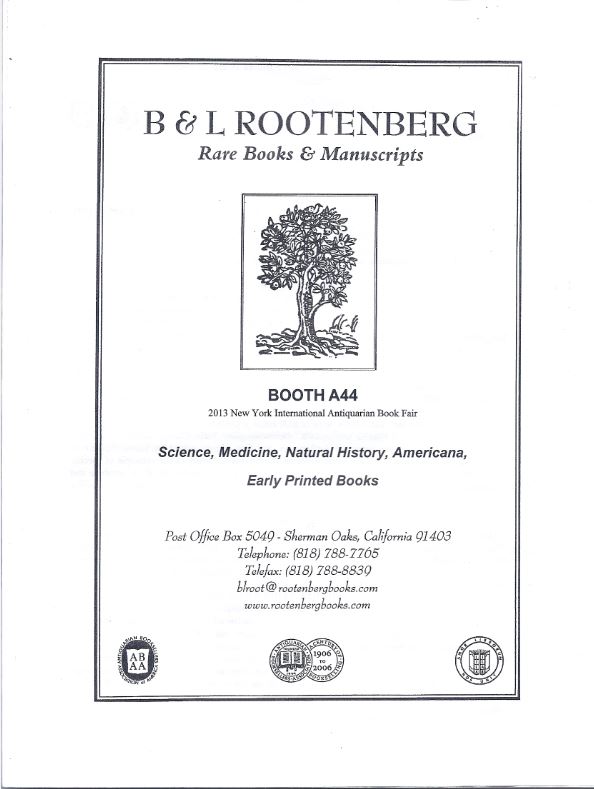 The latest from B & L Rootenberg.

B & L Rootenberg Rare Books & Manuscripts has issued a catalogue of Science, Medicine, Natural History, Americana, Early Printed Books. When a bookseller so neatly describes their catalogue in the title, there isn't much to add. Nonetheless, we will add one point. Within these pages, along with the occasionally odd and obscure, you will find some of the most important books ever printed. Here are a few samples of what you will find.

The title was harmless enough: Narrative of the Surveying Voyages of His Majesty's Ships Adventure and Beagle... The primary contributor was the Captain, Robert Fitzroy. The two voyages took place in the 1820s and 1830s, the four-volume account being released in 1839. It was the third of the four volumes that garnered the most attention. That was the account of the naturalist on the second voyage, Charles Darwin. His descriptions of the natural life he saw in South America and adjacent islands was sufficiently gripping that his volume would later be published in additional runs by itself. Nonetheless, readers could not have imagined what Darwin was thinking as he looked over the similarities and differences between the continental and island species. It would lead to one of the most groundbreaking of biological theories ever conceived in the years ahead. Priced at $85,000.


Darwin's conclusion would come to fruition two decades later, when he explained it all in one of the most important scientific books ever written: On the Origin of Species by Natural Selection..., published in 1859. Darwin's description of evolution (a word he did not use until later on) is fully “evolved” here. This copy contains an inscription from Charles' son Leonard Darwin, stating there is a passage on page 184 his father regretted omitting from later editions. Also bound in at the end is a two-page letter from Charles Darwin and an unrecorded offprint of a paper on his work. $135,000.


This “scientific” work might have been even more controversial than Darwin's, had anyone taken William Gall seriously. A contemporary rebuttal said that “ridicule is the only weapon by which [Gall] can possibly be met.” In one of those long-winded titles that is as bizarre as the book, Gall explains his theories in The Solar System Paraphrased, or Our Range of Space as it Was and Is; Wherein All Astronomical Terms are Suppressed, and the Circles from the Sun to Neptune Presented to the Mind in Distinct Views, with the Physical Forces in Operation which Commenced, Developed, and Decomposed the Dependent Parts of Each Circle, Clearly Demonstrating that Gravitation is a Mathematical Delusion. To which is appended a Paraphrase on the Fall of Man. Take that, Newton! Gravity is but a delusion. Perhaps that explains why people float around in space ships. Gall was either way ahead of his time, or he was a nut case. This copy of Gall's 1855 treatise on the delusion of gravity (he wrote others) includes Gall's four-page rebuttal to the article that stated that ridicule was the only appropriate response. $1,500.


There is clearly only one Holy Grail of American poetry and this is it: a first edition of Walt Whitman's Leaves of Grass. Whitman was an unknown poet when he privately published his work in 1855, doing much of the typesetting and printing himself. After a slow start, Whitman's collection has come to be seen as the quintessential poetic expression of America. The author's recognition by Ralph Waldo Emerson, the leading American poet at the time, certainly helped to bring Whitman to the forefront of American poetry. $95,000.


Lewis Carroll was one of the most popular authors of his age, author of the tale of Alice and her visit to Wonderland. Charles Lutwidge Dodgson was not so well known, but Dodgson was “Carroll's” real name, and he also published under that name. Dodgson was a mathematics professor, rather than a spinner of fiction, but in 1879 he combined serious mathematics with whimsical fiction in Euclid and His Modern Rivals. Dodgson believed that none of the geometry textbooks of the day matched Euclid's original writings, and therefore the original should be used for teaching. However, rather than present his arguments in a serious essay, he created a play wherein Euclid debates his modern rivals. Dodgson explains his “lighter” presentation as an attempt “to make it a little less tedious and a little more acceptable to unscientific readers.” He goes on to note, “subjects there are, no doubt, which are in their essence too serious to admit of any lightness of treatment – but I cannot recognise Geometry as one of them.” This copy is inscribed by Dodgson to Rev. W.A. Barclay. $8,500.


This one takes us back to the dawn of modern communications technology, which is really not that long ago: Construction of Radio Phone and Telegraph Receivers for Beginners, by M. B. Sleeper. It was published in 1922, just two years after the first radio station began regular broadcasting. People were still building their own crystal sets to pick up those faint sounds. $900.