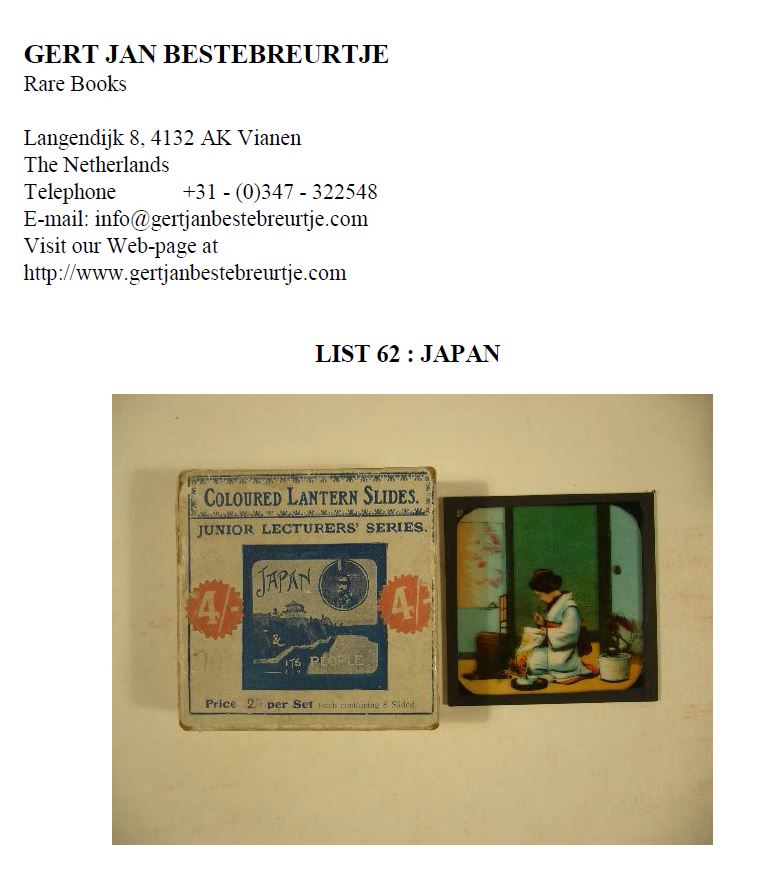 Gert Jan Bestebreurtje Rare Books has issued a new catalogue with the simple title, Japan. It covers works relating to the earliest European visits to Japan through 20th century expositions and other endeavors that connected East and West. The catalogue is divided into two parts. The first, on which we will focus, contains the older and most highly collectible material. The second part contains more recent material pertaining, mostly, to earlier times. Here, now, are some of these items.

We will start with a book by the first European known to have visited Japan. Much of what Fernao Mendes Pinto wrote must be taken with a grain of salt, or perhaps a whole block of it. His adventures at times are so fantastic as to be unbelievable, quite literally. Indeed, his work earned Pinto the royal title “Prince of Lies.” Nonetheless, he tells us about some of the customs and the like of places he visited, and for many, this was the first western account of these places. Mendez, a Portuguese sailor, headed east in 1537. His first stop was India, but he also visited Indonesia, China, and Japan. His adventures in China are among the most unbelievable. He claimed to have been taken prisoner and forced to help build the Great Wall. However, he was then supposedly freed by invading Tartars, reaching a pirate ship that agreed to take him away. However, the pirate ship sank off of Japan, leading him to be the first westerner to reach their shores. Pinto claimed to have been the person to introduce the gun to the Japanese. Eventually, he made his way home and wrote his book in manuscript. It lay idle until finally published 30 years after his death. Item 28 is the 1652 first Dutch edition of Pinto's tale, Wonderlyke reizen van Fernando Mendez Pinto... Priced at €650 (euros, or about US $848).


From the first European to visit Japan we turn to the first English visitor. Will Adams was a remarkable individual. In 1598, he signed on to one of five vessels being sent to South America and Asia by Dutch merchants for the purpose of trade. It was a disastrous mission. Between bad weather and other navigational issues, only two ships made it through the Straits of Magellan. Those who made it suffered numerous other deprivations, including some being slaughtered by natives, others by Portuguese, one of the two remaining ships sinking with all on board lost, and finally Adams' ship, its crew near starvation, barely limping across the ocean to arrive in Japan. Hostile Portuguese missionaries quickly told Japanese authorities the men were pirates and called for their execution. Adams convinced the Japanese otherwise. He would become close to the Shogun, developing a relationship of mutual trust and respect. He taught them how to build western style ships. He was granted the right to trade, and opened relations with other countries, including England. Though others on the crew were allowed to leave, Adams was evidently too valuable and for many years was required to stay. However, once allowed to leave, he chose to remain in Japan. He sent money home to his family in England, but formed a new one in Japan, where he remained until he died in 1620. Item 9 is Will Adams. The first Englishman in Japan, by William Dalton, circa 1870. €225 (US $293).


Item 27 is a Narrative of the Earl of Elgin's mission to China and Japan in the years 1857, '58, 59. It was written by Laurence Oliphant and published in 1860. Elgin served as a British diplomat in places as far flung as Canada, India, and China. Relations with China were tense, the two sides frequently at battle with each other. However, Oliphant reported that they were surprised with the warmth with which they were received in Japan. The nation had only recently been forced to open its doors to trade by Commodore Perry's American mission, but rather than further hostility to the West, Elgin's mission was well received and the men were allowed to travel freely through Japan. Oliphant was Elgin's private secretary, an MP, a later a novelist. €375 (US $489).