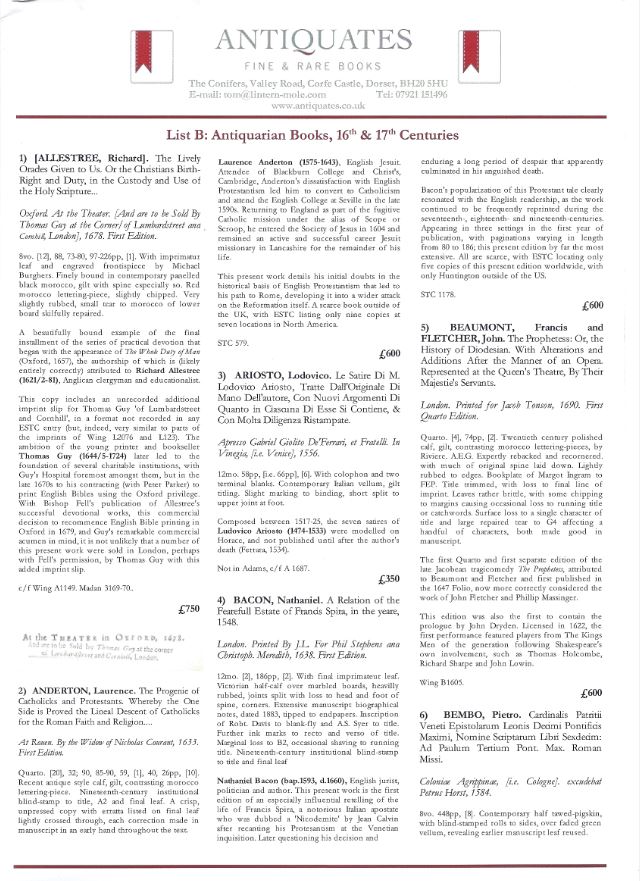 Antiquates Fine & Rare Books recently issued their List B: Antiquarian Books, 16th & 17th Centuries. Antiquates is a British bookseller, which likewise is the origin of most of the titles in this collection. The predominate languages are English, and owing to the great age of the material, Latin. The most common subject, again expected with the age, is religion and theology. Of course, theological debates often mask what are actually political controversies. In England in particular, the battles between Protestants and Catholics often had less to do with theology and more to do with power. To the theological victors went the spoils, giving added impetus to win theological debates by whatever means possible, including force. We will now take a look at a few of the very old books to be found in this catalogue.

It would not have been typical in Elizabethan England to convert from Protestantism to Catholicism, but Laurence Anderton made that journey. While that might have implied dangers, he appears to have ended up none the worse for wear. He was apparently a brilliant student, but his studies led him to question Protestant dogma. He made his way to Europe where he studied and converted to Catholicism. He joined the Jesuits and then returned to England, where he lived the life of a quiet missionary for another 40 years (he used the alias “Scroop” or “Scope”). He published a few books arguing his cause, including this one: The Progenie of Catholics and Protestants, whereby on the one side is proved the lineal descent of Catholics, for the Roman faith and religion... It was published (in Catholic France) in 1633. He describes the path that took him to Rome and attacks the Reformation. Anderton notes that the Catholic Church traces its origin to the earliest days of the faith, all the way back to those of Christ, but that there were no Protestants at that time. Touché. Item 2. Priced at £600 (British pounds, or approximately $910 in U.S. dollars).


Here is a tale from the other side, one that was more popular in England. Indeed, this work, published in 1638, would continue to be reprinted all the way through the 19th century. The title is A Relation of the Fearefull Estate of Francis Spira, in the yeare, 1548, by English jurist Nathaniel Bacon. Spira was born in what was then part of Venice in 1502. He was a respectable person of sizable means. He was, naturally enough, a Catholic, but he made the reverse journey as Anderton. He began questioning some of the teachings of the Catholic Church. This was not a good career move in 1548, and Spira found himself hauled before the Venice Inquisition. He recanted. That resolved his issues with the Church, but not with himself. He questioned his move, as did Protestants (in other lands) who ridiculed him. Spira began to doubt what he had done, and the doubts tormented him. It was all downhill for Spira and not even physicians could stop the deterioration. He evidently just fell apart and died later that year. He became an example for Protestants of why they should hold to their faith even if enormous external pressure is applied. Item 4. £600 (US $910).


Item 24 is the earliest of English county histories, A Preambulation of Kent: containing the description, hystorie, and customes of that shyre. Written in the yeere 1570 by William Lambarde...first published in the yeere 1576... This is a second and enlarged edition, published in 1596. Lambarde was an early historian, having consulted as such to Queen Elizabeth I. Kent is an English county with a particularly long and important history, and with a major ecclesiastical connection. It is the site of Canterbury, as in the Archbishop of Canterbury, leader of the Church of England. Lambarde's account lists all of the Archbishops starting with Augustine in 599. £1,750 (US $2,656).


England's Protestant-Catholic battles were not limited to differences in theology. They couldn't even agree on what the Bible said. Item 18 is A Defence of the Sincere and True Translations of the Holie Scriptures into the English Tong, Against the Manifold Caviles, Frivolous Quarels, and Impudent Slaunders of Gregorie Martin... This 1583 work was by William Fulke, a Protestant. You can guess what Martin was. Fulke was a Puritan theologian at Pembroke College who specialized in attacking Catholic translations of the Bible. £950 (US $1,442).


Item 35 is Meditations and prayers to be used before, at, and after the receiving of the Holy Sacrament of the Lords Supper. One generally would not have expected a woman to be relaying the proper prayers to be said back in the 17th century, but Elizabeth Percy, Countess of Northumberland, achieved a wide audience. At least seven editions were published, this being the first from 1682. This likely would have reached well-heeled women, especially those who liked to pray a lot, at all times of day. £1,250 (US $1,897).


Antiquates Fine and Rare Books may be reached at 07921 151496 or tom@lintern-mole.com. Their website is found at www.antiquates.co.uk.