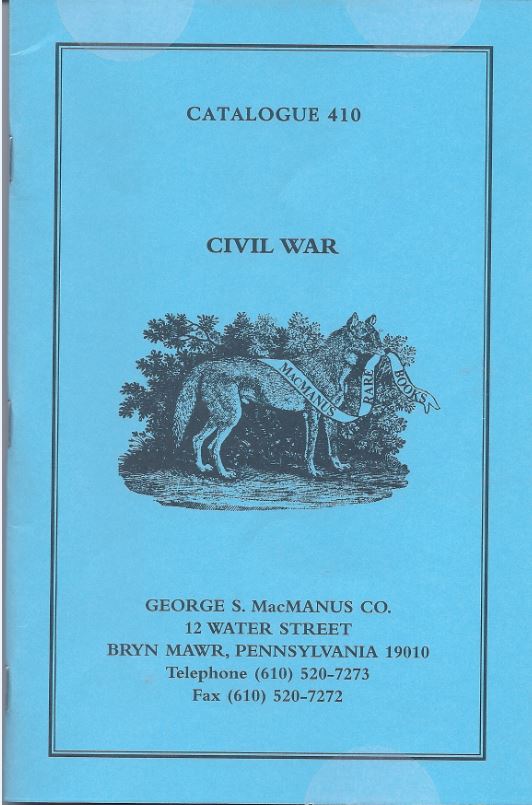 This month we have received the latest installment of the Civil War series from the George S. MacManus Company. This is actually a continuation of a catalogue issued in two parts last year. Those two took us, alphabetically, from A to Maurice. This time we pick up at Maurice, and the 584 new items take us to Ramsey. Obviously, there is more to come, and MacManus has a lot of material pertaining to the Civil War. This catalogue offers a wide array of materials, including histories, biographies, accounts of many individual state regiments, and accounts of participants small and large. The Civil War was a momentous event in American history, one that fascinates to this day, over half a century after the last aged participant passed on. Here are a few books from MacManus' Civil War inventory.

We will start a little before the Civil War, but you will quickly see the connection. Item 87 is the Regulations for the Army of the United States 1857. While this would appear most appropriate for a member of the Union Army, this copy belonged to a noted Confederate. Of course, many soon to be Confederates were Union soldiers in 1857. This one belonged to an 1854 West Point graduate (first in his class) who was then serving in the Army’s Corps of Engineers. He possessed a whole series of famous names – George Washington Custis Lee. His first two names are obvious, the “Custis” was from his mother who was related to Martha (Custis) Washington, but it’s the last name that is most significant. The “Lee” came from his father, Robert E. Lee. Custis Lee, as he was known, resigned from the U.S. Army two weeks after his father, and offered his services to the Confederacy. His engineering skills were quickly put to use as he was placed in charge of building fortifications for Richmond. He was next appointed as an aide to Confederate President Jefferson Davis, where he served as Davis’ eyes and ears in the field. He also provided assistance to his father before, late in the war, being appointed a brigadier general and given a field command. He was captured just before the end of the war, and later served for many years as President of Washington and Lee University, succeeding his father. Custis Lee signed his name to this copy and it is dated March 21, 1857. Priced at $2,500.


It’s hard to imagine there was anything humorous about the Civil War, but somehow A.C. McLeary managed to find something funny. Item 47 is his Humorous Incidents of the Civil War, published circa 1903. McLeary served the Confederate cause with the Tennessee cavalry, and along with the humor the book recounts his journeys around the South. As to how many Union soldiers he shot, McLeary tells us, “Well, I killed as many of them as they did of me.” $100.


Leonidas Polk was known as the “Fighting Bishop,” and fighters sometimes pay the ultimate price. Such was the fate of the Episcopal Bishop for the diocese of Georgia. Polk, third cousin of President James K. Polk, was felled by cannon fire near Marietta, Georgia in 1864, dying instantly. Item 544 is the account of the Funeral Services at the Burial of Right Rev. Leonidas Polk, D.D. Stephen Elliott, Presiding Bishop of the Confederate States, describes Polk as a “Christian warrior,” who noticed before others the “ripening germs of irreligion, of ungodliness, of cruelty.” Why then he chose to give his life to preserve slavery is unclear. $750.


Item 396 is the rather unflattering George H. Pendleton, the Copperhead Candidate for Vice-President. Pendleton ran on the Democratic ticket with George McClellan against Abraham Lincoln in 1864. McClellan himself was viewed as being willing to accommodate southern wishes to achieve peace, though he was a supporter of and General for the Union during the Civil War. Pendleton, however, was a “peace Democrat,” and the line between them and northern supporters of the Confederacy could at times be thin. This brochure makes the claim that Pendleton was on the wrong side of that line, making him a “Copperhead.” It also expounds on Pendleton’s views about slavery. He voted against adoption of the 13th Amendment which outlawed involuntary servitude. $50.


Item 566 is an archive of four letters to his wife from Colonel Benjamin Pritchard of the Michigan cavalry. If his name is not well known today, he was a very popular celebrity in 1865, with calls from the folks back home that he run for governor or congress. Pritchard was famous as the commander of the unit that captured a fleeing Confederate President Jefferson Davis at the end of the war. Davis hoped to get out of the country before he was caught. Thanks to Pritchard’s men, he never made it to Mexico. The first of these letters comes from 1862, prior to his marriage to Mary Kent, while the other three describe the capture of Davis and the aftermath. Shortly after Davis’ capture, Pritchard writes, “…by the blessings of our God thy husband has been chosen to place the foot upon the serpent’s neck and today the arch fiend & traitor and main author of all our national woes lies a prisoner in my power…” In another letter, he writes that Davis and another prisoner “are heavily ironed and confined in solitary cells under heavy guard in this Fortification where they will be kept until trial…” $12,500.


Some dreams die hard, so we will conclude with The Sovereignty of the States: An Oration Address to the Survivors of the Eighth Virginia Regiment…July 21, 1910. Walter Neale addressed the survivors at ceremonies at the battleground of Manassas. This was not a mere memorial presentation. Almost half a century after Lee surrendered, Neale calls upon the aged men to “take up the arms that you laid down at Appomattox, that you fight without ceasing, until southerners again enjoy the rights so long denied them. You and your children must not die slaves.” Neale wanted to leave that to someone else’s children. Presumably, the old vets gave Neale a hearty cheer and wisely ignored everything he said. Item 154. $250.