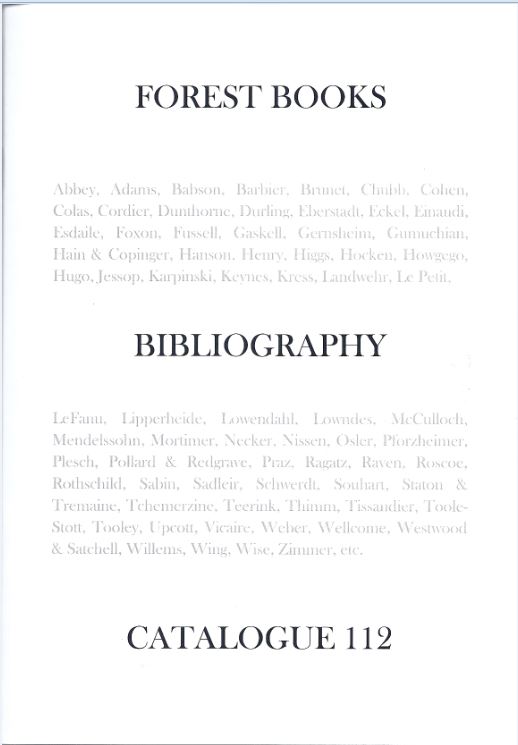 Forest Books has issued their Catalogue 112 Bibliography & Reference. It is filled with almost 700 primarily bibliographical titles. They cover innumerable authors and subjects. You will find the greatest of writers starting with Shakespeare, to lesser known names, many of which, I confess, I do not know. Topics range from those of noted collectibility, such as travel, science, medicine, Americana, great literature, and the like, to those of rather tight niches and obscurity. Some of the subjects of collecting for which you might not expect anyone to have written a bibliography include jigsaw puzzles, the circus, British bee books, British farm livestock, playing cards, British lepidoptera (butterflies), clockmakers' library, English topography, Italian economic literature, foreign travels to Norway before 1900, fencing and dueling, society of civil engineers, fireworks, and the Lesser Antilles. Sorry, but no Greater Antilles bibliographies this time. As you might guess from this list, Forest Books is located in England, but there are many bibliographies centered on American and European subjects. If you are looking for a bibliography of an obscure topic, this is a great place to start. Here are a few samples.

We will start with a bibliography that applies to both Britain and America: A Bibliographical Study of the British Pamphlets About the American Disputes, 1764-1783. That's a gentle way of describing an all-out war with each side doing its best to kill the other. Americans tend to be familiar with their own attacks on the British during the 1760s and 1770s, but pamphlets flew off the British presses concerning these issues at the same time. They ranged from hostility toward the colonists and opinions that they were all a bunch of ingrates, to sympathy for their cause. Though focused on British pamphlets, this 1980 bibliography by Thomas R. Adams was produced by the Bibliographical Society of America. It covers 1,400 titles in about 2,350 editions. Item 8. Priced at £50 (British pounds, or roughly $75 in U.S. dollars).


Benjamin Franklin is noted for many things, primarily his diplomatic skills during the period around the American Revolution, and for being America's greatest scientist of the 18th century. However, he is also well known for his press, having been a printer while undertaking his scientific experiments and before graduating into serious diplomacy. Item 429 is C. William Miller's Benjamin Franklin's Philadelphia Printing 1728-1766: A Descriptive Bibliography, published in 1974. It contains 583 pages of information on Franklin's active press work. £40 (US $60).


Next we have a biography and bibliography of a British publisher and bookseller for whom Americans will certainly allow the British to claim full credit: The Unspeakable Curll. Being some account of Edmund Curll, bookseller, to which is added a full list of his books. This is a first edition of Ralph Straus' 1927 account. Edmund Curll was a rogue, a sleaze, and just about anything else unpleasant one can say about a man. He published all sorts of books, some legitimate, others trash, pornography, scandalous and dishonest. Needless to say, his books were popular. He specialized in pirating books, and if the authors complained, he would just publish more. He published people's private letters, and if these weren't scandalous enough, he would just make them up. He made up claims for medical books and sold patent medicines on the side. His behavior at times got him into trouble. He was sued for libel and was in and out of prison. The experiences would not deter him, Curll quickly returning to his old ways. Curll's career began around 1700 and continued until his not much lamented death in 1747. Item 605. £28 (US $42).


Whether your collection is pro or anti-Methodist, Forest has a bibliography for you. Both were prepared by Rev. Richard Green. The first is The Works of John and Charles Wesley. This is a chronological bibliography of the works published by the Wesley brothers, a second edition from 1906. Item 248. £50 (US $75). The second is Anti-Methodist Publications Issued During the Eighteenth Century. It covers all books written in opposition to the Methodist revival during the lifetime of John Wesley. Item 249 is a 1973 reprint of a book published in 1902. £18 (US $27).


We also find the same treatment available for collectors of Quaker material. Item 580 is A Descriptive Catalogue of Friends' Books, or Books Written by Members of the Society of Friends, Commonly Called Quakers... This is a 1970 reprint of an 1867 edition prepared by Joseph Smith. £65 (US $97). Item 579 is Bibliotheca Anti-Quakeriana; or, a Catalogue of Books Adverse to the Society of Friends... Most unfriendly. This was also written by Joseph Smith, a 1968 reprint of the 1878 edition. £14 (US $21).


No subject is too painful for a bibliography, as attested by Dental Bibliography. A Standard Reference List of Books on Dentistry Published Throughout the World from 1536-1885. This is a 1968 reprint of the 1885 edition, compiled by C. George Crowley. Dentistry wasn't much fun in that era. Item 140. £20 (US $30). It might sound more romantic in French, but is probably no less unpleasant. Item 153 is T. David's Bibliographie Francaise de l'Art Dentaire, a 1970 reprint of an 1889 bibliography. £12 (US $18).