New Arrivals from Between The Covers Rare Books 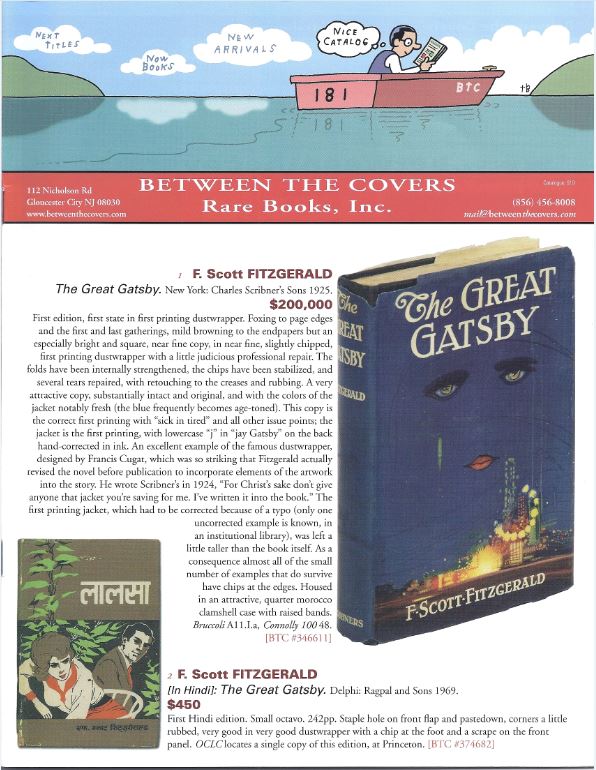 New arrivals at Between The Covers.

Between The Covers Rare Books has issued Catalog 181 New Arrivals. New Arrivals is as good a name as one could ask for this catalogue. It is the one common thread. Otherwise, there is more of a literary nature, fiction than nonfiction in this collection. There is a variety of types of material, not just books but play and radio scripts, photographs, even a stereoscopic book of images from the Vietnam War. Most items date from the 20th century, though there is an occasional exception. We will just present a few samples here in hopes that they convey the flavor.

For those who don't know much about life in Philadelphia, here is a good place to start: The Philadelphia Story. This book, or play, was published in 1939. It was written by Philip Barry with actress Katherine Hepburn in mind. She was evidently the right choice, as she starred first in the play version on Broadway, and later in the movie, to which she had obtained the rights. Hepburn plays the leading role as a high society divorced woman on the eve of her remarriage. Cary Grant plays her ex-husband, while James Stewart is a reporter who has come to write about the wedding. A series of comic hijinks leads to her fiance falsely questioning her loyalty, which leads Hepburn to break off the marriage. However, the wedding is set to begin and all of their guests are there. Stewart offers to marry her since he was part of the cause of the question of Miss Hepburn's fidelity, but ultimately she chooses to remarry Grant, her ex-husband. Only in Philadelphia! Offered is a first edition with the dust jacket depicting Hepburn in the starring role. This copy has been signed by Director George Cukor and all of the major cast members, including Hepburn, Grant and Stewart. Stewart won the Academy Award for Best Actor in 1940 for his performance. Priced at $9,500.


Harry Angstrom began his long run back in 1960 with this novel, Rabbit, Run. He would later appear in three more novels, as John Updike traced the life of this not particularly likeable Pennsylvania businessman and his exploits. For the record, “Rabbit” would be 79 today were he alive, but he isn't. He burned out his candle long ago. Item 58 is a first edition of the first book in the Rabbit series. $750.


Next we have one of the older items, even though it is a “New Edition” of The Experienced English Housekeeper. This is an 1808 edition of a popular guide first published in 1769. It features 800 original recipes (at the time, most cookbooks recycled recipes from earlier collections). The author was Elizabeth Raffald, and she was certainly an experienced housekeeper, having worked for 15 years at the estate of Lady Elizabeth Warburton, to whom she dedicated this book. Mrs. Raffald was evidently an unusually gifted housekeeper. She was better educated than most, her father having been a teacher, allowing her to write a book despite her modest upbringing. Once she left the Warburton estate, she operated several food-related businesses and catered for others. She made what would have been an enormous sum of money for the time when she sold the rights to her book. Unfortunately, Mr. Raffald, who was a gardener at the Warburton estate, was a spendthrift and alcoholic who managed to lose money as fast as she could make it. Along with her 800 recipes, Mrs. Raffald produced almost as many daughters. That is a bit of an exaggeration, but she had somewhere between 6 and 16, depending on whose count you go by, but she outlived all but three (though she only lived to be 48). Why there is such a wide range is unclear, but perhaps once you reach 6 daughters it becomes hard to keep track of them all. Item 18. $375.


Hopalong Cassidy appeared on the western stage in 1906, the creation of cowboy writer Clarence E. Mulford. Cassidy bore 28 novels, a testament to the popularity of his and his various sidekicks' characters. When the books came to a close in the early 1940s, Cassidy became a popular figure in films, radio, and after that, he was the premier television cowboy in the early days of that medium. By 1950, Hopalong Cassidy films, comics, and all sorts of merchandise was raking in big dough. However, his popularity receded with the decade, and while Hopalong was a 50s guy, he was not a man of the 60s. Still, those who lived during his heyday can no more forget the fictional Hopalong Cassidy then the half-real, half-fictional cowboys like Roy Rogers and Gene Autrey, who would develop their own large followings. Item 70 is not a Cassidy book, at least directly. It is Mulford's Mesquite Jenkins, who is described as “Hopalong Cassidy's pal.” Cassidy had sort of adopted the brash young cowboy in earlier appearances, with Mesquite graduating to his own book in 1928. Item 70. $450.