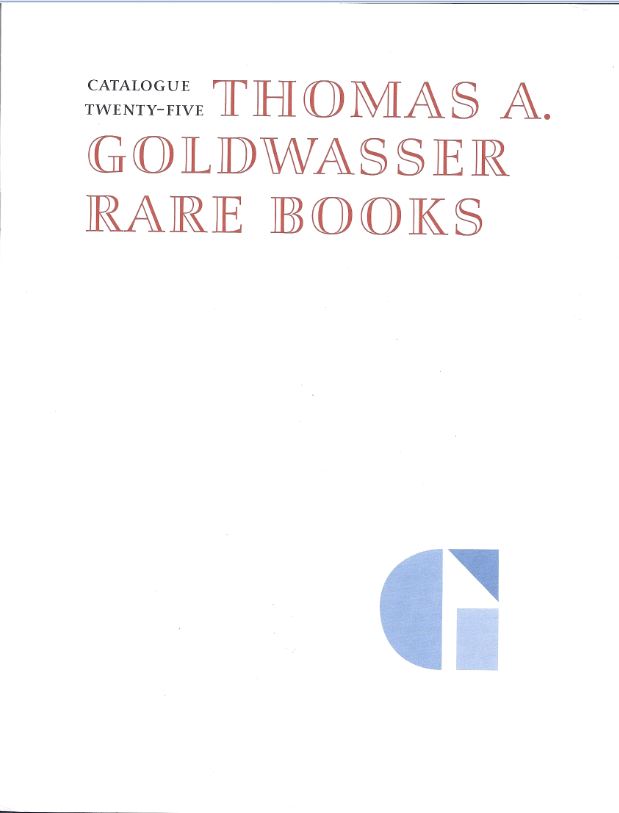 Thomas A. Goldwasser Rare Books has released their Catalogue Twenty-Five. It comes with no title beyond that number, but we will try to sum up the types of material. For the most part, they fall into two categories – books that are also works of art, and important literature, often with an inscription or other important connection between the author and another person. The connection of two notable people makes a book doubly interesting. These are some of the books offered in Thomas Goldwasser's latest catalogue.

One of the greatest influences on Albert Camus, the French Nobel Prize winning author, was Friedrich Nietzsche, the 19th century German philosopher. Though not a follower of Nietzsche, Camus repeatedly turned to concepts the former had developed in his own writings, with numerous citations to him. Much of this undoubtedly arose as a result of his college studies at the University of Algiers. He was deeply influenced by the French philosophy professor and writer Jean Grenier, who taught at the university at this time. It was likely through Grenier that Camus obtained the copy of Neitzsche's The Gai Savoir (a 1921 edition) offered here as item 19. Camus has signed and dated this book in 1933, while still 19 years of age. It also contains his annotations in pencil. Twenty-seven years later, on the day Camus died in an auto accident, three things were found in his briefcase – the manuscript for an unpublished novel, a copy of Othello, and this copy of Le Gai Savoir. Along with the book, item 19 includes an invitation to a play Camus received in 1957 on which Camus wrote various notes. Priced at $25,000.


While Camus was studying Nietzsche in college, Tennessee Williams was writing poetry. After a couple of years at the University of Missouri, followed by a couple of years of factory work, Williams returned to college in 1936 when he enrolled at Washington University in St. Louis. It was in the November 1936 issue of Eliot at the university that he published the poem Sonnet to Pygmalion. However, this was evidently written earlier as the manuscript is dated December 30, 1935. Williams has signed it “Thomas Lanier Williams.” This poem would not be republished until after Williams' death in his Collected Poems. Item 139 is this manuscript, and on the back is a working draft for a poem entitled An Empty Skull, which would later be incorporated in Cryptic Bone, published in Eliot in 1937. $5,000.


Here is one more work with a college connection. F. Scott Fitzgerald attended Princeton University, and it was there that he honed his writing skills. Fitzgerald was a member of the Cottage Club at the university, and it was in their library that he began writing what would later become his first novel, This Side of Paradise. It would not be until several years later, in 1920, that this book would be published. Item 41 is a first edition of This Side of Paradise, and it is inscribed to Princeton student Jerry English, “April Fools Day 1920 – Cottage Club.” The novel had just been published six days earlier, and Fitzgerald had returned to Princeton for a visit. Two days later, Scott married Zelda, the beginning of one of the most tempestuous of famous marriages, and not long after, the novel would become a great success, sending him off on his literary career. $40,000.