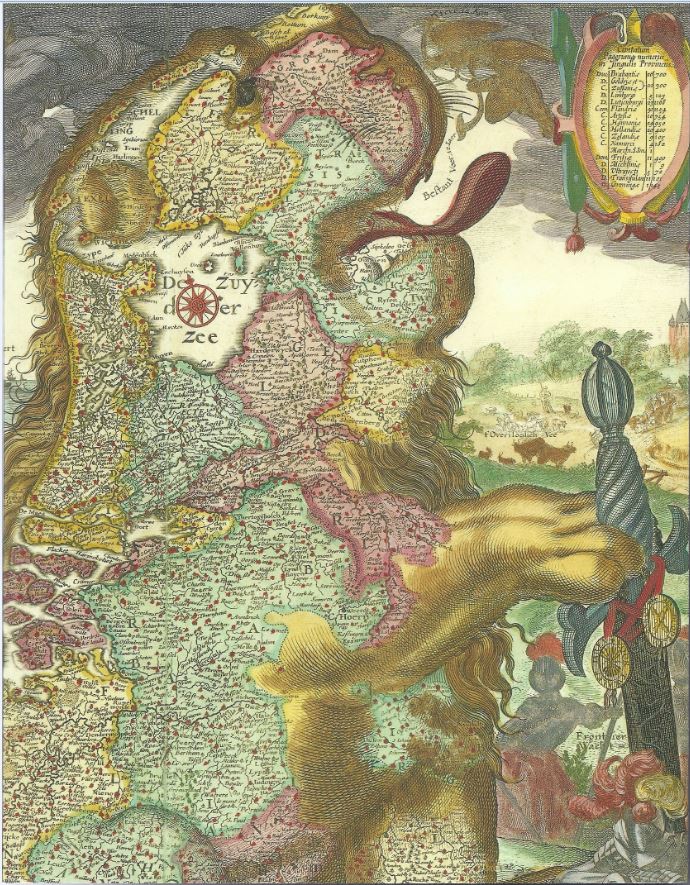 Leo Belgicus on the cover of Daniel Crouch's Catalogue V.

Daniel Crouch Rare Books has issued their Catalogue V (as in 5), a spectacular, half-inch thick compilation containing just five-times-five items. These are 25 very special pieces, each playing a role in the development of our knowledge of the world. Daniel Crouch specializes in maps and related material. Here you will find atlases, maps, globes, sea charts, city views, and illustrated tapestries. Maps are both of this world – terrestrial – and not of this world - extraterrestrial, or celestial. Some go back as far as 500 years and all are well into the appellation “antiquarian.” Many are of great importance. Here are a few.

Item 3 is one of the earliest, and perhaps the earliest map to depict America. It is Martin Waldseemuller's world map which appeared in his atlas of 1513. Emerging from the lower left portion of the map is a continent, roughly resembling the northeast corner of South America. The islands of Hispaniola (“Spagnolla”) and Cuba (“Isabella”) are also visible, but North America, except perhaps as a small unnamed fragment west of Greenland, does not appear. At 1513, it would not be the first map to depict a part of America. Waldseemuller had shown parts of the continent in his maps of 1506 and 1507, the first to contain the name “America” (he withdrew the name in 1513, perhaps as a result of recognizing that Columbus, not Vespucci, had discovered the new land). However, Crouch notes that some scholars believe that this map may actually have been produced earlier than those of 1506 and 1507, perhaps 1505-1506. The depiction of South America is less well delineated than in those other maps and North America is lacking. The map is also not identically sized as others in the atlas, having to be trimmed to fit the binding. Conjecture is that this map may have been printed earlier though not used until 1513. Priced at £80,000 (British pounds, or roughly $121,475 in U.S. currency).


Item 4 is an unrecorded map engraved by Christopher Tassin and issued by Nicolas Berey in 1644. It was based on a 1627 Hondius map (of which only two of the four sheets are known to survive). That map in turn was based on Blaeu's 1605 map. This large map also was published in four sheets. Prior to its discovery, this map was known only in a 1650 issue by Berey and one from 1668 by Hubert Jaillot. The map depicts Korea as an island, but still keeps California attached to the continent. This was the beginning of the era, lasting almost a century, in which most maps depicted California as an island. Perhaps most noticeable on the map is the massive southern continent, the mythical Terra Australis Incognita, with its northernmost tip in the area of what we know today as Australia labeled “Beach.” The date of Tassin's engraving is unknown, but the six maps of Spain and its provinces at the bottom suggest no earlier than 1634. Berey purchased Tassin's plates in 1643, and one of the few changes from the earlier Hondius version is some rough text pertaining to Brouwer's discoveries from 1643. £60,000 (US $91,178).


Item 12 is a complete set of one of the most important collections of American voyages ever published, the 13-volume Grand Voyages of Theodor De Bry and his descendants. This copy includes the extraordinarily rare Elenchus, sort of a table of contents, the last part of the collection, published in 1634. Theodore De Bry was responsible for the first six volumes, but after he died in 1598, the project devolved to his sons, later to the surviving son, and finally to that son's son-in-law. The books contain accounts of the earliest explorations of the Americas, including numerous illustrations of the land in its most natural state before massive influences by Europeans. For many in Europe, this was their first look at the New World. £350,000 (US $530,475).