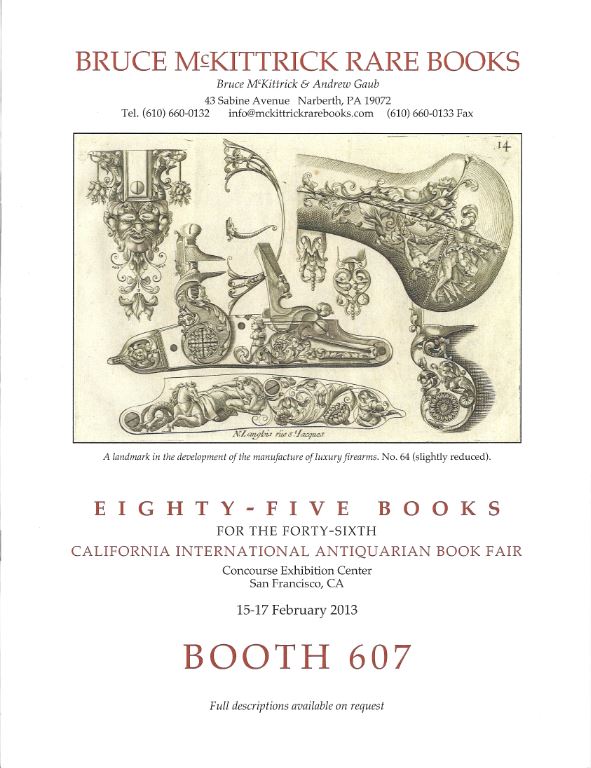 Bruce McKittrick Rare Books has published a catalogue of Eighty-Five Books. That describes the quantity, so we will have to add a note about the what. What we find is old books, very old books. This catalogue even has a section of incunabula. Much of the remaining material is almost as old. You will need to brush up on your Latin for some of these titles. They are also European in origin, though they all found their way to America in the past 500 years.


We will start with a true rarity – the only surviving copy of the 1482 edition of Hic incipit liber magistri Esopi. It was published in Vicenza, most likely by Jacopo de Dusa, whose other four books were also printed in 1482. This book is Aesop of the Middle Ages, containing a selection of 65 12th century fables unique to this and two other text-only 15th century editions. Item 28. Priced at $85,000.


Here is another book McKittrick informs us is a one of a kind: Schola textoria nova, by Daniel Kruger. Published in 1664, it is the “first edition of the first printed book on weaving.” There had been another copy, but it was destroyed during World War II. Item 83. $8,500.


Christian Europe often had need for understanding passages of the Hebrew Bible, but few could understand the language. Antoine Chevalier was one of the individuals who attempted to assist by publishing a basic introduction to Hebrew in 1566. The title is Alphabetum hebraicum and it provides pronunciation with transliterations of the Ten Commandments and Lord's Prayer. Item 14. $7,500.


Item 49 is an unusual piece. It is an uncut sheet designed to be cut into a deck of 52 playing cards. Called Les Tables de geographie, this set was printed around 1690, though originally designed by Pierre Du Val in 1669. Since the cards are in the four suits and numbered, it could be used for ordinary card games, but each card is also packed with geographical information, so perhaps it came with its own set of rules. Du Val was French King Louis XIV's geographer, and these were originally created for his son, Louis, later known as “le Grand Dauphin.” Louis was known as the “Grand Dauphin” because his son, known as the “Petit Dauphin” (small) was born while his father continued to reign. Incredibly enough, Louis XIV outlived both dauphins, the crown passing to his great-grandson when he finally died. The aces in this set consist of four continents, Africa, Asia, Europe, and the Americas. As was believed at this time, the American map shows California as an island. The cards were dedicated to the Dauphin. $3,500.


Denis Fournier was a Parisian surgeon, well respected in his time, which was the second half of the 17th century. He developed several surgical instruments along the way to aid in his practice. He was particularly well known as an expert in matters relating to the heart and pulmonary system. In 1678, he self-published the first and only edition of his experiments and beliefs in a book entitled L'Anatomie pacifique nouvelle et curieuse. Item 53. $13,500.


Item 19 is a 16th century German epic poem by Georg Rollenhagen entitled Der Froschmeusler. That sounds really serious, but in fact this was a witty, humorous poem. It is based on an ancient Greek verse, Batrachomyomachia, usually attributed to Homer, but whose actual creator is uncertain. It is the epic “Battle of Frogs and Mice,” a parody of epic war stories of the time. Instead of heroic Greek warriors, the combatants are frogs and mice. This ancient story has been particularly popular in Germany, this version remaining in print into the 20th century. Offered is a first edition from 1595. $11,500.