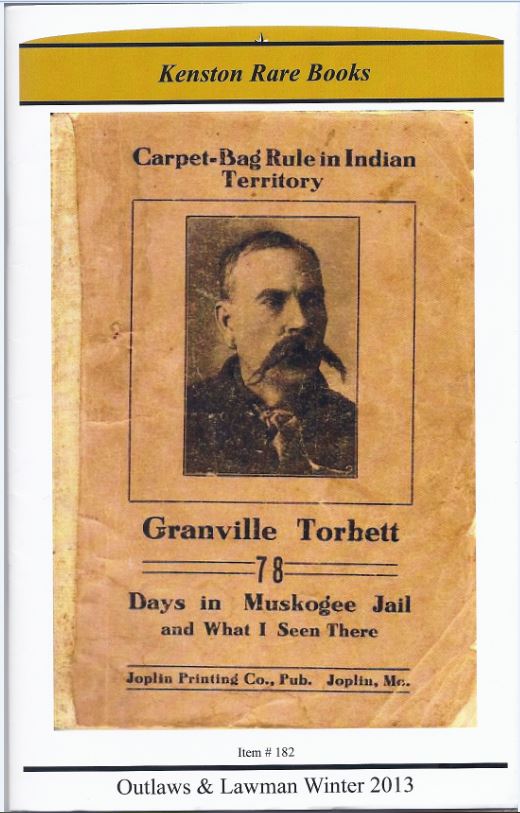 Granville Torbett on the cover of the latest Kenston catalogue.

Kenston Rare Books has issued a catalogue of Outlaws & Lawmen. Kenston is a specialist on Texas and the American West, the Old West to be specific. This one, as the title indicates, is not so much focused on cowboys and Indians as on outlaws and those who pursued them. There is not much about the the Custers and Sitting Bulls here, but Billy the Kid, Jesse James and Wyatt Earp fill many of its pages. The personalities cover the Kid and James' era up to that of Bonnie and Clyde, half a century later. The books, however, range from contemporary to recent. You will find books for collecting, reading, or mostly, both. Let's take a look.

That picture you see on the cover of this catalogue is probably that of Granville Torbett, author of the title 78 Days in Muskogee Jail and What I Seen There. Merle Haggard may have thought Muskogee was the most wonderful place on earth, but Mr. Torbett strenuously disagreed. His 78 days were evidently most unpleasant. Torbett does not tell us exactly why he was thrown in jail, but he says the defense attorneys are but “confidence slicks and grafters of the legal profession.” The marshals are interestingly described as a “cross between humans and measles.” Conditions in the jail were deplorable, with rotten food, inadequate clothing, indifferent guards, and generally inhuman treatment. However, Torbett saves his worst attacks for the government of what was then Indian Territory, saying it was run by “carpet baggers from New Jersey.” This is a very obscure title, and while this copy is not in the best of condition, you may never come across another. Item 182. Priced at $385.


Here is Wyatt Earp as you never knew him. Earp is today remembered for his winning role during the Gunfight at the O.K. Corral in Tombstone, Arizona. He was the good guy, the U.S. marshal who gunned down the bad guys. In the days after, Earp bounced around to many locations and many jobs. One of them was as a boxing referee, which led to his receiving the job of officiating a heavyweight title bout in 1896 between champion Bob Fitzsimmons and Tom Sharkey. By the end of this fight, Earp was better known for his role as a referee than a gunfighter, and he was no longer the good guy in most people's eyes. Earp arrived at the ring with his six-shooter strapped to his waist, whereupon marshals were forced to remove it. What was controversial, however, occurred in the ring. In the eighth round, Fitzsimmons knocked Sharkey to the canvas, the latter apparently being in some state of unconciousness or semi-consciousness. The fight was over, but not in the way most expected. Earp ruled that Fitzsimmons hit Sharkey while he was down, a claim disputed by many. He awarded the victory to the unconscious Sharkey. Needless to say, this did not make Earp a popular man with the crowd. Fitzsimmons later sued for the purse, but was rebuffed when the court decided it could not rule on the case because boxing was illegal in San Francisco. Many charged Earp with fixing the fight, but no one knows for sure what was his motivation. He moved on to other pursuits, never returning to San Francisco until his ashes were buried there in 1929. Item 40 is The Earp Decision, by Jack DeMattos, published in 1984. It contains newspaper accounts of the controversial fight and the court case that followed. $30.


Billy the Kid has received much bad press over the years. It's time to look at Billy The Kid: The Good Side of a Bad Man. The Kid has been alleged to be many unpleasant things – cold blooded killer, cattle rustler, thief. Certainly he killed many men, but the circumstances and motivation are not always clear. He had many defenders, who saw Billy as a defender of the underdog against powerful interests. Unquestionably, he was extremely loyal to those he served, and was popular with many at the low end of the social spectrum, especially poor Mexican-Americans who had few supporters outside of their own community. This 1989 book, by Lee Priestley with Marquita Peterson, is based on interviews with families from New Mexico whose ancestors had known Billy and passed down their memories of him. Item 124. $30.


Billy the Kid met his demise in a darkened room, at the wrong end of a gun held by Sheriff Pat Garrett. At least that's how the story goes. As frequently happens when such celebrated people die, rumors persisted that it was not really Billy who was shot that night, that the event was staged, or it was someone else, or who knows what. The theory is that Billy went into hiding to live his days peacefully somewhere else (like Elvis). Item 191 is Billy The Kid: “Killed” in New Mexico – Died in Texas, by Dr. Jannay P. Valdez and Judge Bobby E. Hefner, published in 1994. They support the theory that “Brushy” Bill Roberts, of Hico, Texas, who died in 1950, almost 70 years after Garrett supposedly shot The Kid, was really Billy. Roberts was extensively interviewed in the late 1940s, and said many things that could make you believe he was Billy, and others that could make you question his claim. Sixty years after he died, he still has his supporters and detractors. $45.