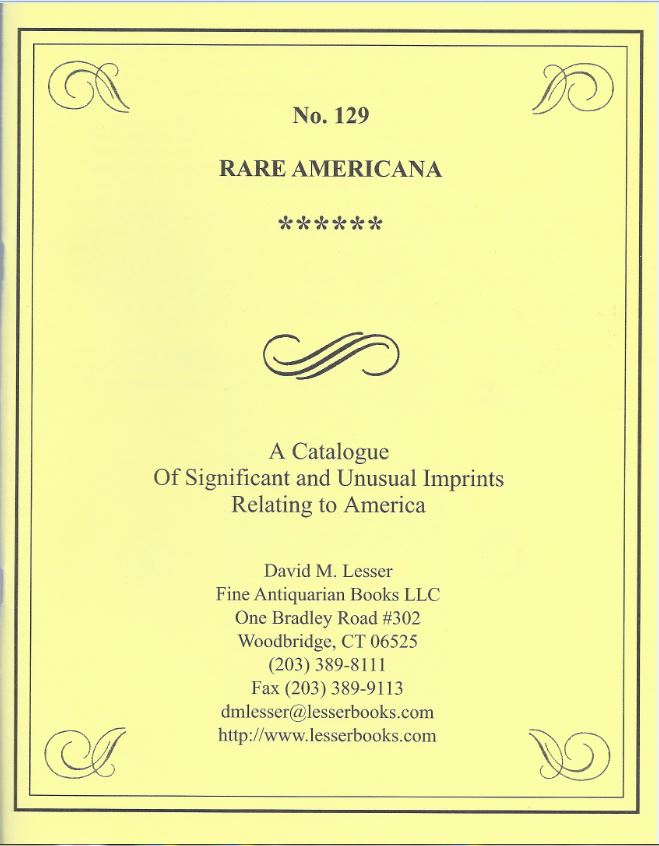 David M. Lesser Fine Antiquarian Books has issued their catalogue No. 129 Rare Americana. Lesser describes these as “my latest and most interesting acquisitions.” There certainly is some fascinating material here, much of which makes us wonder at how people saw the world in another time. It covers two centuries, but most is concentrated in the period from the Revolutionary War to the Civil War. Looking at that period, there was no greater internal controversy than that over slavery. The vehemence of its defenders enables us to better understand how half the nation could go to war to defend what today seems indefensible. They saw the world in a very different light. Here are some samples of what you will find inside.

We will start with a truly odd item, a letter from the first president of Liberia, Joseph Jenkins Roberts. If you are wondering why this autograph signed letter is in an Americana collection, Liberia was formed by freed American slaves. Roberts was born in Virginia, a slave whose father, a man named Jenkins, was a Welsh farmer. Roberts, his mother and siblings, were freed when he was a child, and in 1829, he emigrated to Liberia. This letter, from 1850, was written to John H. March, American consul in Madeira. Roberts asks March to convey a message to a Mrs. O'Sullivan that he could not procure a particular rare African bird for her, but that he may be able to send “a bird or two which may probably interest her.” Item 109. $375.


Here is another oddity, a book by an Englishman, but this is a 1795 edition from Philadelphia. Richard Brothers received many messages from God, or at least he believed he did. What he was told was that he was God's nephew and was called on to be Prince of the Jews. Apparently, there were many Jews, survivors of the Lost Tribes of Israel, living in England, only they didn't realize that they were. Brothers would reveal their identities and lead them back to Jerusalem to build the city anew. Surprisingly enough, Brothers attracted a significant following. He must have been a good speaker. Unfortunately, he went too far in his prophesying when he claimed King George III would die and the British Empire be overthrown. He was cited for treason and locked up in an insane asylum. Next, Brothers made one more major mistake. He said that he would be revealed as the Prince of the Hebrews and Ruler of the World on November 19, 1795. Well you all know what happened, or didn't happen, on November 19, 1795. As a result, he lost most of his followers, and languished in an asylum for ten years before being released to the custody of his last follower. He spent the remaining 20 years of his life preparing for his rule in Israel, a day that never arrived. Item 22 is Brothers' A Revealed Knowledge of the Prophesies and Times Particular to the Present Times... and remarkable Things Not Revealed to Any Other Person on Earth... $350.


Here is an example of one of those opinions that helps us understand why some defended slavery so vociferously. It comes form the Chancellor of South Carolina (chief judge) William Harper in 1837: Memoir on Slavery, Read Before the Society for the Advancement of Learning, of South Carolina... Harper had some interesting thoughts to advance their learning. He claims that slavery is, “a principal cause of civilization,” quickly upping the ante to “the sole cause.” For some reason, he concludes “the command of another's labour” forms the “foundations of civilization.” And, he adds, “with no exceptions whatever.” However, this is not nearly the height of Harper's offensiveness. He goes on to justify “licentious intercourse” between master and slave saying it “is less depraving in its effects, than when it is carried on with females of their own caste... The intercourse is generally casual; he does not make her habitually an associate, and is less likely to receive any taint from her habits and manners.” Item 70. $650.


Item 87 is perhaps the only contemporary separate printing of the Alton Lincoln-Douglas debate. Alton is in southern Illinois, a pro-slavery town where an anti-slavery editor was murdered 20 years earlier. This report, which was taken from the Chicago Daily Times, is obviously prepared from a Democratic point of view. It claims, “Lincoln, as usual, tried to suit himself to the locality and to conceal his Abolitionist sentiments...” It notes, evidently disapprovingly, that to Douglas' claim "I would not blot out the great inalienable rights of the white men for all the negroes that ever existed,” Lincoln said that Negroes are covered by the great principles of the Declaration of Independence and slavery is a moral and political evil that should be barred from the territories. Item 87. $2,000.