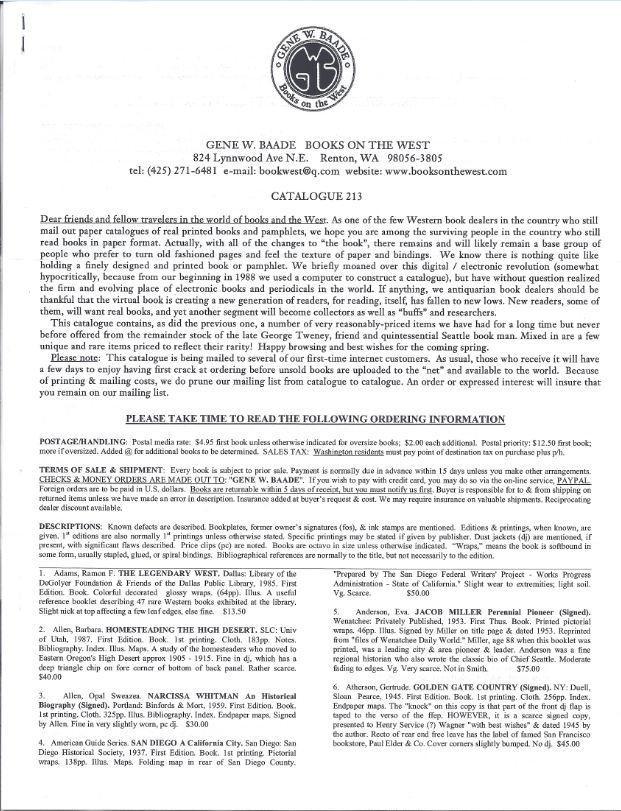 Books from the West.

From Gene W. Baade Books on the West we have a new selection, Catalogue 213. Baade, of Renton, Washington, offers a selection of inexpensively priced books and ephemera, some collectible, others for reading, some recent, others old. With one or two exceptions, the material pertains to the American West in days of yore. I don't think the word “yore” has been used since days of yore, but I'm sure you understand. That's a good word for a western catalogue. Here are a few of these items that pertain to the less populated side of the Mississippi River.

Wild Bill Hickok is one of those legendary characters from the Old West. Most such legends became such because of their skills with a gun, more specifically, their ability to employ those guns to put bullets inside of people with which they had some sort of differences. Hickok was one of those, though unlike a Billy the Kid, he was generally considered to be on the right side of the law. Not everyone, however, always agreed. His reputation was for the most part made as a result of a shooting at a stagecoach station over an unpaid debt. Hickok apparently shot some people, was charged with murder, but acquitted on the grounds of self-defense. Exactly what happened is unclear, but Hickok's legend grew as a result, and whatever exaggerations might have been part of the story, Hickok was happy to pass them along. Ultimately, that may have been a mistake, as he would later be shot in the back by someone trying to make his name by shooting a legendary gunfighter. For those interested in learning more about the “real” Wild Bill Hickok rather than just the legend, item 44 is The Real 'Wild Bill' Hickok, by Wilbert E. Eisele, published in 1931. Priced at $45.


Wherever there are Indians there are bound to be... not cowboys, but tales of captivities. This is not limited to western Indians, but goes back to the times when settlers were still chasing Indians from their native territories in New England and New York. Most of these stories, told by whites, naturally enough were not favorable to the Indians. They focused more on effect rather than cause. Item 48 is Frost's Pictorial History of Indian Wars and Captivities or Life in the Wigwam. This compendium of captivity accounts was first published in 1850. This is the 1873 edition which appears to be the first combining the two volumes. It is generously illustrated with woodcuts and engravings. $175.


Item 81 is an award for crossing the mighty Mississippi, a souvenir type of item from 1960. It was issued to people who made the river crossing and, undoubtedly, paid a few bucks for the recognition of their achievement. Not that it was much of an achievement. The crossing took place near Lake Itasca, the source of the Mississippi. It is not so wide there. $10.


Item 31 is a biography of Rankin Crow and the Oregon Country, by Crow, as told to Colleen Olp. Crow may not have been a natural writer, but he was great with horses. He also herded cattle and ran a ranch along the way, but his greatest interest was horses. He would supply bucking horses for the rodeo near his home area of eastern Oregon, a lightly populated, desert territory. The book, which was privately published in 1970, covers from the earlier settlers of eastern Oregon to the “1969 Miss Rodeo Oregon.” Mr. Crow has inscribed this copy “to no one in particular,” Baade says. It could be you. Crow departed this earth for the great round-up in the sky in 1978. $29.50.


You probably didn't even know that Nebraska has a poet laureate, but here is a book about a man who held that honor for 52 years. It must have been frustrating for generations of younger Nebraska poets trying to reach that pinnacle of recognition. Item 34 is A Sender of Words: Essays in Memory of John G. Neihardt, edited by Vine Deloria, Jr., and published in 1984. As a young man, Neihardt became interested in the settlers and Indians who inhabited the plains, traveling down the Missouri River and meeting with many of the people he encountered. These interviews would become the basis for much of the poetry and prose he wrote through his long (92 years) lifetime. Along with the book is a large photograph of Neihardt and a brief biography of Deloria. $50.


This might be a bit of a stretch for a bookseller as it contains no paper and only two words, but it is definitely an item of the west. Item 172 is one of those diamond-shaped metal road signs that announces Cattle Guard. You don't see many cattle guards in the east, but a cattle guard is a grate-like apparatus that crosses many highways in the west. Cows can't walk over them, but people can, and so can cars, but don't drive over one too quickly or it will jar your teeth out. The sign is typically road sign colored – yellow with black lettering. We are told this sign came from a ranch in northeastern Washington, near the Canadian border. $125.