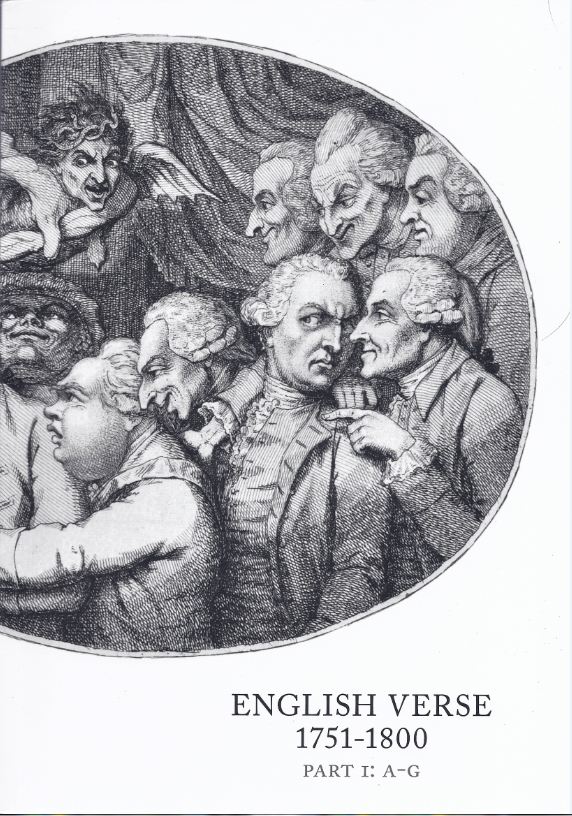 Justin Croft and Simon Beattie have issued a catalogue of English Verse 1751-1800. Part I: A-G. Who could have imagined there were so many poetical Englishmen? Here are over 300 poetical tracts covering just the second half of the 18th century and only authors from A-G. This is not filled with Shakespeares or Shelleys or whomever were their late 18th century counterparts. If you are deeply into English poetry of this period you will probably recognize a few names, but many are shrouded in obscurity. Some earned good reputations, others were seriously panned, at least by their contemporary critics. Many men of the cloth turned to poetry in this era, with varying degrees of success. This poetry will undoubtedly entertain you, some for the right reasons, others for the wrong. This is truly a remarkable collection of such work, much of which you undoubtedly will never find again. Here's your chance. Now, these are a few samples.

First up is Harold, a Tragedy, by Thomas Bryce. This is a poetical drama on the Norman Conquest that was delayed from publication until 1786 because of a similar, conflicting play. That other play, The Battle of Hastings, by a Mr. Cumberland, was described by the English Review as “one of the worst tragedies in the English language,” the reviewer noting that “Harald forms a bad subject for a tragedy.” Perhaps this review is what held poor Mr. Bryce, a clergyman, back from even publishing his version for years. The play was never performed. Another tragedy! Item 68. Priced at £250 (roughly $394 in U.S. dollars).


Item 87 is Buonaparte's Reverie: a Poem, by H.L. Galabin, published in 1799. This is an inscribed copy of what is described as “a witty poetic satire on Napoleon's grandiose delusions in the face of the recent failure of the Nile expedition.” Napoleon undertook a mission in 1798 to seize Egypt in the hopes of interfering with archenemy Britain's trade with the East. It did not go well. The Egyptians were an unruly lot, not willing to bow to Napoleon's wishes. Meanwhile, the French naval forces were defeated by Horatio Nelson (something that would happen again) in the Battle of the Nile. Bonaparte took advantage of unrest in France as an excuse to hightail it out of Egypt and return home. While his departure from Egypt made for some good British satire in 1799, Napoleon would soon wreak all kinds of havoc on the British and Europe before finally being subdued a decade and a half later. £600 (US $947).


Item 204 is A Collection of original Poems, by Samuel Derrick, published in 1755. Derrick was a linen-maker who left Dublin to become an actor on the London stage. Apparently he was a bad actor, his career short-lived. He turned to writing instead. He was not great at this either but eventually settled into the comfortable job of Master of Ceremonies at Bath, sort of a head greeter and P.R. person. During his literary years, he did manage to make the acquaintance of both Samuel Johnson and James Boswell. Boswell ended up rather contemptuous of him, describing Derrick as “a little blackguard pimping dog.” I'm not entirely sure what that is, but it doesn't sound nice. Johnson was perhaps a bit more tolerant, but according to Boswell, when asked who was the better poet, Derrick or Christopher Smart, replied, “no settling the point of precedency between a louse and a flea.” Again, this doesn't sound positive. £700 (US $1,105).


Item 183 is Rhymes after Meat. By a Bird at Bromsgrove... a fourth edition, circa 1800. John Crane was the “Bird at Bromsgrove” (get it?), a watchmaker whose emblem was a crane with a watch in his beak. The Monthly Critical Gazette described Crane as a man “whom the Gods, in their wrath, have made poetical.” Crane's aim in writing these poems may have been to promote his business, as his book is a vehicle for advertisements of the many goods he sold, including jewelry, nutcrackers, cutlery, musical instruments, cricket bats, and much more. £950 (US $1,501).