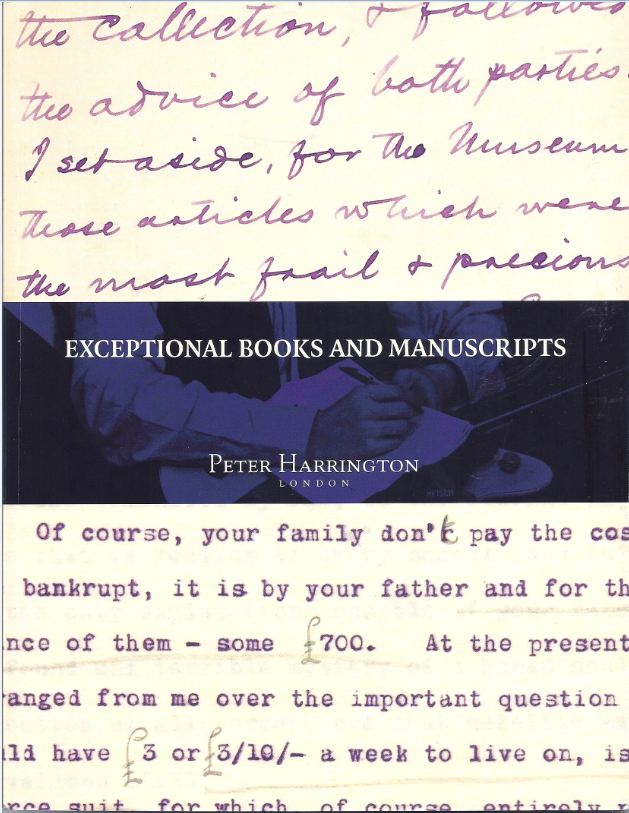 Peter Harrington of London has issued a catalogue of Exceptional Books and Manuscripts. Offered are 75 items that clearly qualify for the “exceptional” description. The names or events will all be familiar. The material is highly collectible, perhaps not within everyone's budget, but certainly highly collectible. Here are some samples of the exceptional seventy-five.

In 1930, Winston Churchill published a look back at his youth, a book entitled My Early Life. Churchill was a notable British politician at the time, but no one (except, perhaps, Winston himself) could have imagined how important a leader on the world stage he would become. This book covers his life up until 1904, at which time he was 30 years old. It describes his childhood, his time in India, and in South Africa during the Second Boer War. He was a war correspondent in South Africa, was captured, imprisoned, and escaped. His adventures helped to build his reputation, leading to his first election to Parliament in 1900. The rest, as they say, is history. This copy comes with a very interesting inscription, to Conservative Prime Minister Stanley Baldwin. Their relationship was contentious, and eventually the split became complete despite their both being members of the Conservative Party. Churchill was a hardliner in opposition to growing demands from India for more independence from Britain. Item 10. Priced at £25,000 (Approximately $39,240 in U.S. currency).


Here is another book with an intriguing inscription. It is one of the already most highly collectible of books, one of the 750 copies of the first edition of James Joyce's Ulysses, published in 1922. It had to be published in Paris to avoid English censorship. The inscription, dated April 8, 1922, is to Sidney Schiff. Schiff was a writer and critic who moved in the best social circles of Paris' artistic community. It was Schiff who would host one of the most notable of parties a month later. Joyce attended, along with Marcel Proust, and other artists including Picasso and Stravinski. However, it was the meeting between Joyce and Proust, the two notable writers, that had everyone on edge. How would this meeting of two great literary minds go? The answer is that it was a dud. The two had little to say to each other. It was a meeting that Schiff and the others anticipated with great expectations, but what sounded good on paper proved to be two personalities that did not mesh. £125,000 (US $196,317).


Here is another man who frequented the soirees of Paris in the 1920s and drank with some of the same cast of characters. That would be Ernest Hemingway, the notable American writer who was not very notable in the early 20's, even though some already recognized his talent. Item 24 is a copy of his in our time (no capitals), published in 1924. It is a collection of short stories, Hemingway's second book and the one that began to bring attention his way, at least from his fellow literati. Only 170 copies were released. An expanded edition was published the following year, but this is the first edition, published in Paris. £18,750 (US $29,442)


For anyone angling for a classic sporting book, item 66 is the big fish: The Compleat Angler, a 1653 first edition of Izaak Walton's book on fishing. The book was written as a dialogue between two men, a fisherman and a traveler. Through their discussion we learn the fine points of fishing, or angling, and the joys of this recreation. There is probably no more notable book in the sporting world than this one. £75,000 (US $117,758).