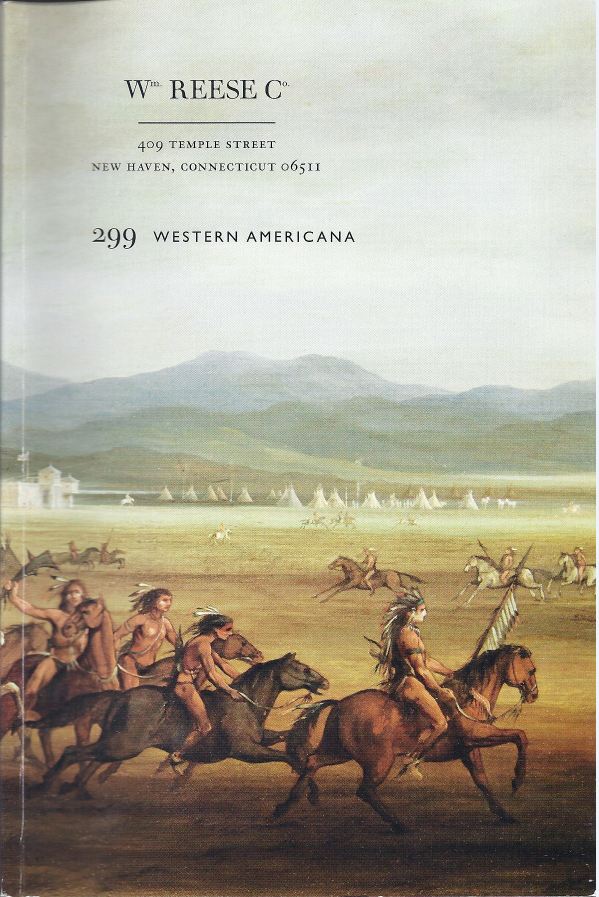 The William Reese Company has published their 299th catalogue, Western Americana. Reese describes the theme of this catalogue as “the exploration, settlement, and development of the trans-Mississippi West.” Material ranges from the 16th to the early 20th century. Along with printed items it offers manuscripts, maps, and visual items. The American West remains a topic of fascination, not just to Americans but Europeans and others around the world. It is a land of legends, and many tall tales too, but there is something about the wild frontier that appeals to all of us (just as it did to Davy Crockett). Here are few items that take us back to these wondrous times.

The most important exploration of the American West, and of any internal explorations of America, was conducted by Lewis and Clark in 1804-1806. Having recently completed the Louisiana Purchase, a vast territory he knew next to nothing about, President Jefferson sent Lewis and Clark out to survey what he had purchased. Though they returned in 1806, it was another eight years before the official account was published, various factors delaying its publication. There was some information announced by Jefferson, and Patrick Gass, a member of the expedition, published an account in 1807. Still, there was much more the public wanted to know, and there were unscrupulous individuals ready to fill that void, even if they were no more knowledgeable than anyone else. Item 107 is The Travels of Capts. Lewis & Clarke... published in 1809, the so-called “apocrypha edition.” It was patched together using information provided by others, notably Jefferson and Gass, along with reports about Indians from totally unrelated sources, such as Carver and Mackenzie, the idea being that earlier accounts of eastern Indians would undoubtedly be acceptable descriptions of Indians of the West. The book even uses an illustration of the Indians Lewis and Clark supposedly encountered from Bartram's earlier work. Nonetheless, the book was very popular and accepted, being reprinted for several decades, even long after the official account was published. One positive is the map, and though not much based on Lewis and Clark, it was based on the latest information from various sources available at the time. Priced at $13,500.


Item 9 is one of the earliest obtainable imprints from Texas, a certificate of admission to Stephen F. Austin's colony. The date was 1829, when Texas was still part of Mexico, so naturally the certificate is headed in Spanish, El Ciudadano Estevan F. Austin. Mexico, much to their later great regret, was allowing Americans to colonize parts of this outer province of the nation. In time, they would become suspicious of these American immigrants, but by then it would be too late. Even the then-cooperative Austin would turn against Santa Anna. This certificate was issued to a widow named Frances Manifee. It was the first step to gaining admission to Austin's colony. $25,000.


Texas declared its independence from Mexico in 1836, but it was not the only future U.S. state to do so that year. Less well known is that California declared its independence in 1836 too. The circumstances were very different. It was not a case of American immigrants trying to throw off rule that seemed foreign to them, even though they were the immigrants. This was more of an intramural squabble between local Mexican authorities and those back in Mexico City. Juan Albarado (Alvarado) was upset by Mexican attempts to assert greater central authority. He and his associates responded by declaring independence. This broadside, En el Puerto de Monterrey de la Alta California... announces California's independence. It was printed by Santiago Aguilar, using Augustin Zamorano's press. Zamorano had been forced into exile three days earlier by Alvarado. Eventually, the rebels and central authorities would resolve their dispute and the abortive independence of California would end. However, Alvarado would again be serving as California Governor at the time of the Bear Flag Revolt and seizure of the state by General Fremont, when Mexican rule truly was overthrown. This copy is signed in both print and ink by Alvardo and his associates. Item 27. $75,000.