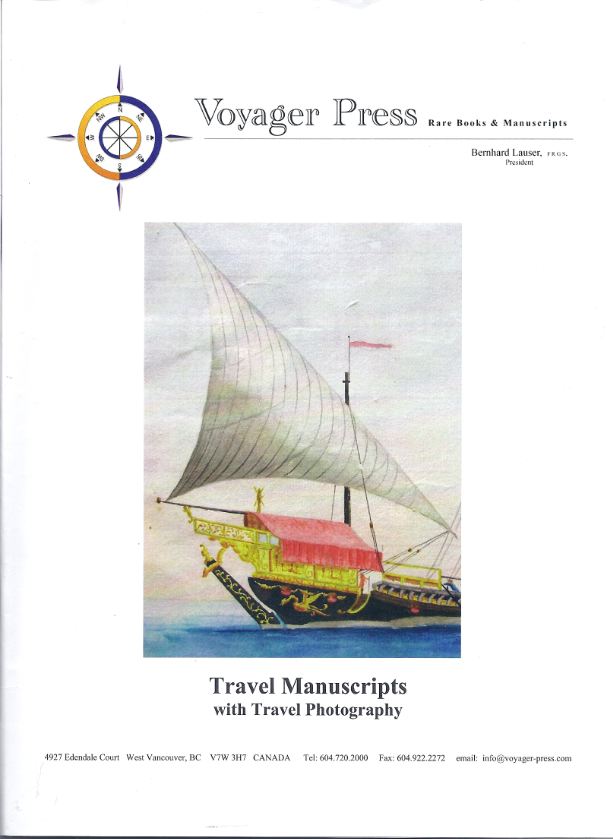 Voyager Press Rare Books and Manuscripts has issued a catalogue of Travel Manuscripts with Travel Photography. This, quite naturally, is filled with one-of-a-kind material. These are personal collections, on paper and film, by travelers all around the world. Some went on business, others pleasure. Some were Americans, others Europeans. They traveled to the heat of equatorial regions, or to the cold of Antarctica. What they had in common was keeping a record of what they saw as they traveled. Their accounts were not published, effectively lost to history, until resurrected in this catalogue. Here is a chance to relive adventures of long ago, in the words and images of those who experienced them first hand.

We start with an archive from “Operation Highjump,” an American mission to the Antarctic undertaken just after the second world war. It was headed by noted polar aviator-explorer Admiral Richard Byrd. Byrd was the first to fly over the north and the south pole, though some doubt his claims at least to the former. The archive was compiled by James G. Snyder, a young (21) officer with the expedition. It was designed to test equipment under the harsh conditions of the environment and determine the feasibility of operating bases in the Antarctic. An unstated aim may have been to secure territorial claims for America. The mission ran from summer 1946 through early 1947. These were the early days of the developing Cold War, when the U.S. was seeking to gain advantages over their Soviet rivals. The collection includes a hand-drawn map and an unofficial naval certificate signed by Byrd. However, most of Snyder's account is focused on a particular incident. On December 30, 1946, the George One, an airship, went down. Three crewmen died in the crash, but six others survived. It took 13 days to complete a search and rescue of the surviving airmen. Snyder writes in detail about the rescue. Priced at $9,750.


Next we have documents from another recovery effort, though one that sadly was too late for saving lives. They pertain to the first U.S. submarine lost at sea, the USS F-4 (SS-23), which sank just a mile and a half off the coast of Hawaii in 300-foot deep water in 1915. It was one of four such submarines stationed in the Pacific. Submarines were fairly new at the time, dangerous ships that brought hazardous duty payments to their crew. On March 25, 1915, the F-4 went out to sea to test some diving maneuvers. Its commander tested a dive that included forward movement. Exactly what went wrong is uncertain, but apparently there was leakage around the battery compartment, perhaps caused by corrosion resulting from the batteries. Crewmen noticed the smell of chlorine gas, leading the commander to attempt to reverse course and raise the ship. Unfortunately, he was not successful, as further leakage brought the ship down. It became completely flooded, with the entire crew perishing. Search crews were sent out immediately when the submarine failed to return, in hopes of finding the ship and dragging it quickly to shallow waters. This was unsuccessful, and the rescue mission became one of salvage a few days later. This archive includes various documents pertaining especially to recovery of the bodies of the crew. $5,750.