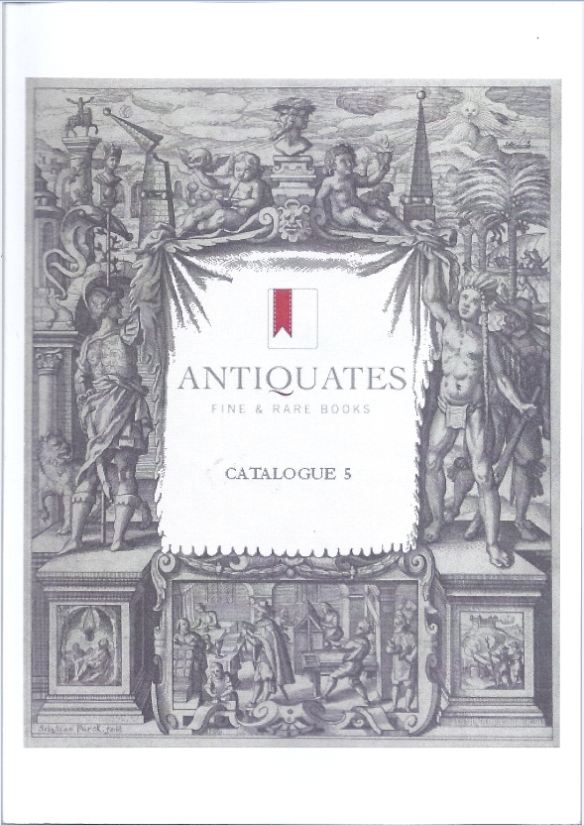 A miscellany from Antiquates.

This month we received our first catalogue from Antiquates Fine and Rare Books, a bookseller located in Corfe Castle, County of Dorset, in the U.K. For Antiquates, this is Catalogue 5 – Antiquarian Books, a Miscellany. A miscellany is by definition hard to peg, but we can say that Antiquates specializes in English and Continental works, and the material is old, ranging from old to very old. They are antiquarians. You will find disputes involving kings and theologians, works of science, medicine, and math, books concerning travel, shipwrecks, wars, the theater, literature, witchcraft, etiquette, and probably just about anything else. It is, after all, a miscellany. Here are a few samples of what Antiquates has to offer.

John Wesley is known as a theologian, the founder of Methodism. However, he was more, a generous man with concerns for the poor. Among his non-theological works, though there is a “faith-based” bent here, is Primitive Physic: Or, an Easy and Natural Method of Curing Most Diseases. Of course, there aren't easy and natural ways of curing most diseases, but this was the 18th century, when new medicines, real and worthless, were regularly being discovered based on isolated cases, rather than scientific studies. Wesley compiled a list of home remedies for various diseases. Most were based on ingredients found in the home or readily available. His intent was to serve the poor, those unable to afford the surgeons or costly “remedies” of the day. He was condemned by many surgeons, but his remedies were probably as good as those of others. Some, through the test of time, have proven to be helpful, others, such as cold water baths for rabies, were based on misconceptions. Still, it was as good a medical aid as one could hope for in its time. Item 154 is a ninth edition (of 23 published during his lifetime – it was popular) from 1761. It is the first to contain the two-page postscript on electrical therapy. Wesley was enamored of this new force, which would revolutionize the world a century and a half later, but was less effective in the ways Wesley imagined, such as curing blindness and shingles. Priced at £250 (British pounds, or roughly $400 in U.S. dollars).


Perhaps if Wesley had been born a few decades earlier, he would have had to deal with less pleasant theological issues. At the turn of the 18th century, witchcraft was a major issue of the day, particularly in America. Item 15 is An Historical, Physiological, and Theological Treatise of Spirits, Apparitions and Witchcraft, by John Beaumont, published in 1705. Beaumont was a geologist, not a theologian, and wrote about his personal experiences, rather than looking for excuses to burn someone else. He had visitations from ethereal beings, and as might be expected of someone experiencing such visitations, it became a major focus of his life. For a three-month period, he wrote, he was visited by various beings who spoke to him, played music, and otherwise interacted with their human host. Such visitations might keep one up at night, particularly when they announce, as they did to Beaumont, they would kill him if he went to sleep. After a few days, he finally was forced to challenge them on this point, and Beaumont successfully called their bluff, as he lived until 1731. Today, we might say Beaumont was crazy, or at a minimum hallucinating, but to him, the visits were real, and he expands upon these experiences and explains what he thinks they mean. £950 (US $1,519).