Legal and Law Related Works, Some Serious, Others Not So Much 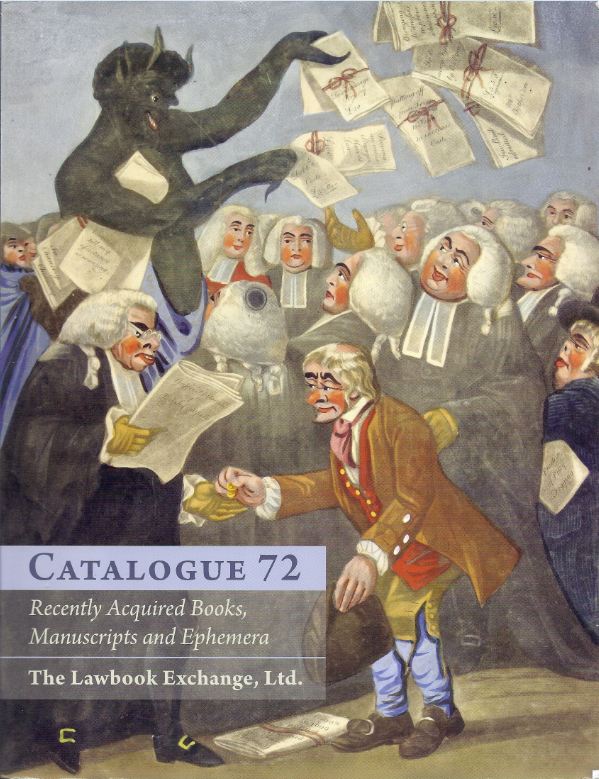 The Devil made those lawyers do it.

The Lawbook Exchange has issued their Catalogue 72. Recently Acquired Books, Manuscripts and Ephemera. It covers much ground related to the law, from learned legal treatises, to more pop culture of their day stories of crime and punishment. There are many items which will interest the non-legal scholar, including numerous very old books, some being items of incunabula. We also find some broadsides and prints, these shorter pieces often being satiric rather than serious (though serious in their own way). A few manuscripts and photographs also make their way into the catalogue, such as those from notable American jurists such as Brandeis and Frankfurter. There is much to be found here, and you do not need to be a lawyer to appreciate it all.

We start with one of the most significant legal tracts ever printed. It has been described as the book that “made” the common law. Item 42 is La Grande Abridgement... together with the second part, the first edition published by Richard Tottell in London (1565). Up until the time Anthony Fitzherbert created this compilation of English cases in the early 16th century, it was difficult to determine what the law, as interpreted by judges, was. Fitzherbert abridged 13,485 cases, which he published under 263 titles listed alphabetically. He essentially took all of the important cases at common law and made the decisions available to the legal trade. For the first time, the tenets of common law became readily accessible to the public. Priced at $6,500.


From the not so serious side of the law, item 35 is the engraving depicted on the cover of this catalogue, The First Day of Term..., or The Devil among the Lawyers. Lawyers seem to have a bad press among the public, ranking almost as low as politicians and used car salesmen, even though it is not clear that their good to bad ratio is any different from that of other professions. Evidently, this unpleasant image is nothing new, as this satirical cartoon dates back to around 1760. In the picture, a smiling Satan is seen passing out briefs to eager lawyers, while another takes some coins in payment from what appears to be something of a country bumpkin. The papers at his feet say “Begun in 1699. Not yet finished.” $2,500.


Lawyers were made the butt of jokes even earlier. Item 97 is the unkindly named play Ignoramus, George Ruggle's biting satire of the English bar, first performed in 1615 (this first edition was published in 1630). This “comedy” is in Latin, and makes fun of the language of the common law and the dullness of lawyers. It is based on a legal dispute between the Mayor of Cambridge and the Vice-Chancellor of Cambridge University. $750.


From the less serious we move to the grisly. Item 19 is The Trial & Execution of John Horwood, which Took Place at the New City Gaol, This Day, (Friday April 13 1821) For the Wilful Murder of Eliza Balsam. Friday the 13th was not a lucky day for Mr. Horwood, unless you consider being the first to be hanged in Bristol's new jail to be a strike of good fortune. John Horwood was a young man of 18 when he spied his former girl friend, Eliza Balsam, with another man. The young English miner was so upset that he threw a stone at Miss Balsam. Unfortunately, his aim was a bit too good, and while it apparently did not cause a major injury, she nonetheless died in surgery. Horwood was tried and promptly executed at the end of a rope, a detail illustrated on this broadside. In compensation for his unsuccessful work saving Miss Balsam's life, the surgeon was rewarded with Horwood's body. He skinned and tanned Horwood's hide and used it to bind the papers from the case. Horwood's skeleton was kept in a closet, the noose still around his neck, and was not buried until 2011, 190 years later. $1,250.