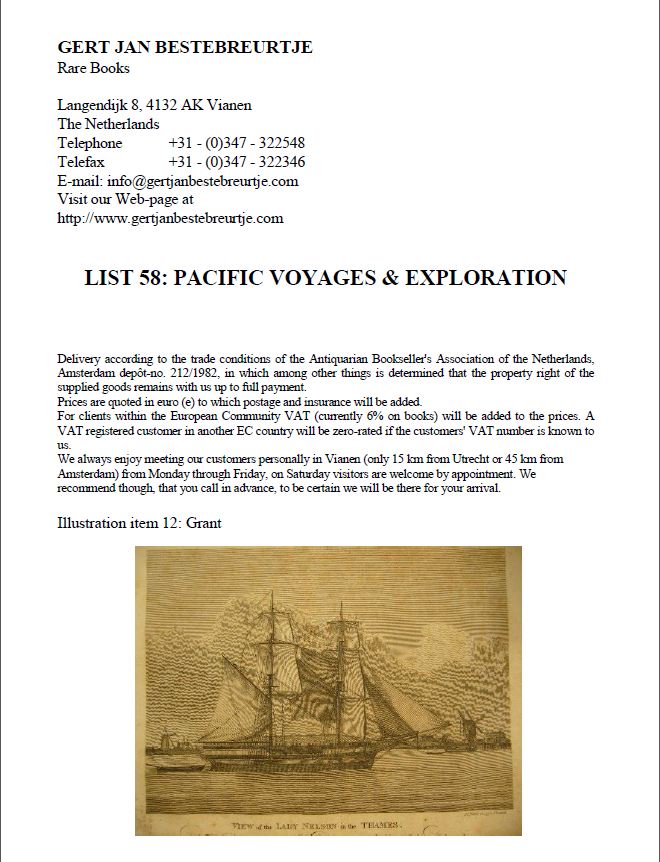 Gert Jan Bestebreurtje Rare Books has published a catalogue of Pacific Voyages & Exploration. These works cover the age of discovery along the Pacific rim, from Australia and New Zealand, to the west coast of America, with many islands in between. Most date from the 17th century to the early 19th. The voyages began in Europe, and to there they returned.

This catalogue is divided into two sections, Part 1 and Part 2. We will focus on Part 1, though it is the smaller group. These are the older items, often contemporary accounts, and the most highly collectible. Material in Part 2 is primarily from the 20th century, and inexpensive, mostly priced in the €15-€35 range. There is interesting material, and undoubtedly much appropriate for a beginning collection, but we will concentrate on material of greater value and collectability at this time.


Item 24 is An account of several late voyages and discoveries... This book includes detailed accounts of several 17th century voyages, with briefer descriptions of several more along with a lengthy introduction. Longer accounts are provided by John Narbrough of his trip through the Strait of Magellan to the South Pacific, Abel Tasman to Batavia and on to discover New Zealand and Tasmania, Wood and Flaes' journey to Nova Zembla in an attempt to find a Northeast Passage, and the first English translation of Friedrich Marten's voyage to Spitsbergen and Greenland for whaling. The editor and introducer is believed to be Sir Tancred Robinson, who writes of Dutch explorations toward “Terra Incognita,” the then believed to exist massive southern continent, and indicates they made great discoveries which they have never revealed. Robinson was a British natural historian and writer who traveled all over Europe, but not to the distant lands described in this book. Offered is a second edition from 1711, which has been described as “preferred” to the 1694 first edition as it adds the chart of the southern and western oceans as well as additional text about Greenland and whaling. Priced at €7,950 (euros, or approximately $10,389 in U.S. dollars).


Speaking of the aforementioned Tasmania, an early, though somewhat later visitor was James Grant, who here relates The narrative of a voyage of discovery, performed in his majesty's vessel The Lady Nelson... Grant was sent in 1800 to perform explorations on the south coast of Australia and then deliver his ship to Matthew Flinders in Sydney. At the time, it was believed that Tasmania was connected to the continent, so his route took him around the island. However, when he reached Cape Town, South Africa, Grant received a message that it had been discovered Tasmania was an island, so he was ordered to sail through the strait and chart this new area. As such, Grant became the first to sail between Tasmania and Victoria (in southern Australia) from west to east. When he did make it to Sydney, Grant found that Flinders had already returned home, so he was sent to conduct further explorations along the southern Australian coast. His book, published in 1803, includes the first chart of the southern Victoria coast. Australia collectors take note – according to Wantrup, “It is of the highest significance to any collection of Australian books and no collection of books dealing with coastal discovery or with Victoria can be without it.” The picture on the cover of this catalogue is of the Lady Nelson, Grant's ship, setting to sail on the Thames. Item 12. €7,450 ($9,747).


Item 23 is an account of seafaring adventures of a different variety. Frenchman Raveneau de Lussan, though of a notable family, still had no money. He set out for Santo Domingo to make a living, but when that didn't pan out so well, he turned to piracy. He spent a few months pillaging in the West Indies, and then headed over to the Pacific coast of South and Central America. His tale is one of “both the romantic and bleak sides of the buccaneering profession,” along with descriptions of the natives and Spanish settlements. The title is, Journal du voyage fait à la mer du Sud avec les flibustiers de l'Amérique. €1,250 (US $1,635).


Item 22 is A Voyage Round the World; But More Particularly to the Northwest Coast of America... by Nathaniel Portlock, published in 1789. Captain Portlock and Captain John Dixon had both served under James Cook on his last voyage. Each was placed in charge of a ship and they set out together in 1785 to explore the west coast of America. Their job was to survey the coast, establish opportunities for trading furs, and attempt to discover a Northwest Passage. Naturally, they did not succeed on the last of these, but did on the others. They also spent considerable time in Hawaii, the first English visitors since Cook's last stop and death on the island in 1779. Oddly, both Portlock and Dixon wrote accounts of the journey with identical titles. €6,250 (US $8,173).