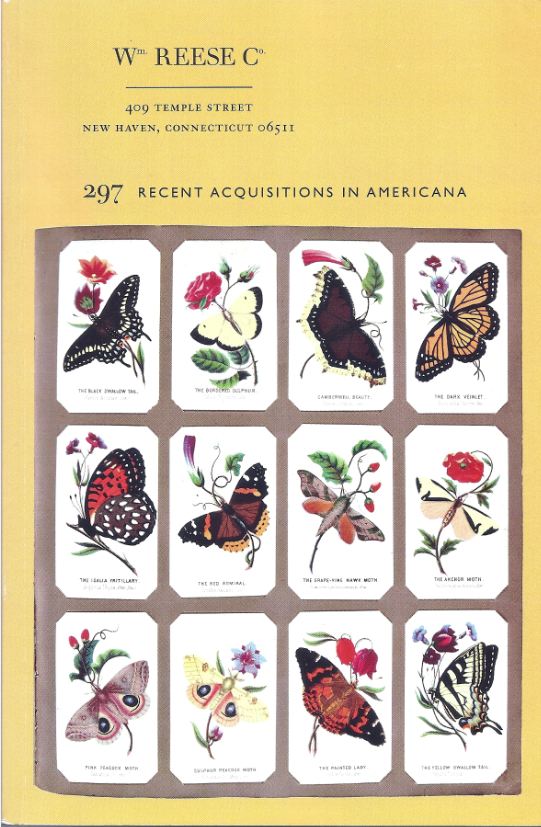 The William Reese Company has issued a catalogue of Recent Acquisitions in Americana, with an extended title of with Material from Newly Acquired Collections on American Presidents, Early American Religion & American Artists. While they regularly offer catalogues on other subjects as well, the Reese Company has been one of the foremost dealers in printed Americana for at least three decades. Their catalogues provide a variety of material in the field, ranging from some of the most important items to come to market, to others in the mid-priced range. This latest group of acquisitions fills this niche, running from signed battlefield letters from George Washington, to letters home by an ordinary Civil War soldier. Here are a few of these new items.

It took a Steven Spielberg movie to bring this ancient case back to public attention, but it is a remarkable story in American history. Item 12 is John Barber's A History of the Amistad Captives: Being a Circumstantial Account of the Capture of the Spanish Schooner Amistad, by the Africans on Board... Most everyone knows this story now, how the slaves on the Amistad were captured from Africa, taken to Cuba, and then on to be smuggled into the South. Slavery was still legal at this time (1840), though the capturing of African natives for slavery was now illegal in America. The slaves rebelled, overtook the ship, and attempted to flee. Lacking navigational skills, they ended up off of Long Island, where they were taken to Connecticut and held for trial. The Africans were acquitted. Barber has presented a history of the events and biographies of the men involved. However, this book was not the final say, as the U.S. government appealed the verdict freeing the enslaved Africans to the Supreme Court after this account was completed. Their freedom was later upheld with the aid of representation by former President John Quincy Adams. Priced at $3,000.


One would expect to find opponents of slavery in the North, but in the South? Not vocal ones, anyway. Item 49 is something of a surprise – Poor Peter's Call to His Children and to All Others Who Can Hear and Believe. This work, published from Salisbury, North Carolina, was written by Peter Clemmons, founder of the town of Clemmons in that state. Clemmons had once been a slaveholder, but freed his slaves when he saw the light. He argues against those who live off the labor of black people, and describes those who buy and sell slaves as similar to those who traffic in stolen goods. At his most vehement, Clemmons says, “...many of these proud delicate beings [slaveholders], will go to the bed of the despised negroes, both male and female, and commit adultery, whoredom, and mingle their seed with those they will not suffer to set down at their tables and eat bread with them.” Not gentle words, though accurate. It is amazing that Clemmons could get away with this in the South, but the year was 1812, and the really hardening of positions would come a couple of decades later, when it is unlikely he could have survived saying such things. $4,000.


Not all Northerners were enlightened on the issue of slavery. Samuel F.B. Morse was a noted American inventor, the man who invented the telegraph and the Morse Code. His invention allowed for the instantaneous communication of information over vast distances, moving at the speed of light, rather than the speed of horses. However, Morse's social views were as abhorrent as his scientific ones advanced. He was an adamant supporter of slavery, even during the Civil War, claiming it to be a wise, preordained system with no moral shortcomings. However, if there is someone Morse would have detested more than a black person, then it would have been a black Catholic, or worse yet, a black Catholic Irishman. Morse ran for Mayor of New York in 1835, the year before he developed his telegraph, on an extreme nativist platform. He garnered only a handful of votes. That same year he published this book: Foreign Conspiracy Against the Liberties of the United States. In it he claimed, “That a vigorous and unexampled effort is making by the despotic governments of Europe to cause Popery to overspread this country, is a fact too palpable to be contradicted.” Item 138. $3,000.