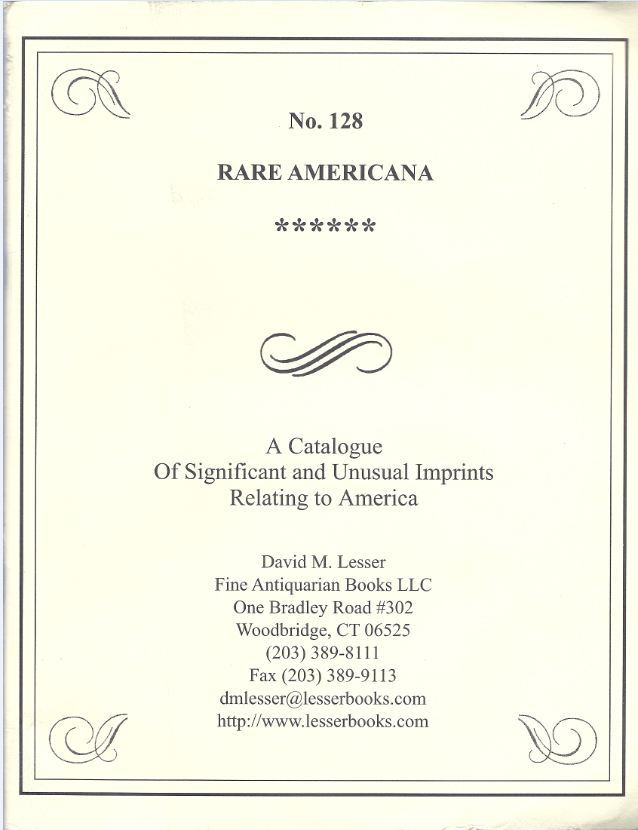 David M. Lesser Fine Antiquarian Books has released their catalogue No. 128 Rare Americana. Lesser primarily offers shorter form material, from broadsides to pamphlets to occasional manuscript items, along with a few full length books. Items mostly come from the 18th and 19th century, and generally reflect the immediacy of the concerns of the day. Most were probably not expected to be kept for long, so finding them today is always a happy surprise. As expected, the material is related to America. Here are a few samples of what is in store.

Now that we have said most items come from the 18th and 19th century, we will start with one from the 20th. I suspect it is in here because it was an integral part of one of the century's most important events – the Supreme Court decision that desegregated the nation's schools. Item 21 is Transcript of the Record. Supreme Court of the United States...Oliver Brown...vs. Board of Education of Topeka. The record includes various documents filed with the Supreme Court and testimony of various parties involved. Brown and the other appellants were parents of black children who had been denied access to the white schools of Topeka, Kansas. Racial segregation had been maintained under a 19th century Supreme Court case that allowed for segregation based on the doctrine of “separate but equal” schools for all children. In this case, the Supreme Court of 1952 overturned that earlier decision, ruling that separate schools were inherently unequal. The decision started the slow and tumultuous process of integrating the segregated schools that existed over much of the nation. Priced at $1,500.


There was a time, before the internet, before TV, when we had to learn about scandals through print. Item 40 is a copy of a Boston Daily Bee Extra. It provides The Arguments of Counsel for Libelee, Helen Maria Dalton, in the Dalton Divorce Case... It includes various papers pertaining to the notable scandal of 1857. The Daltons were a wealthy Boston couple. Everything was fine, her lawyers said, until, “her flattered vanity, in a moment of folly and indiscretion, led her to take a step which has become the great sorrow of her life.” That was to become involved with one William Sumner. Mrs. Dalton described it as a platonic relationship, and it is possible there was only flirting going on, but Mr. Dalton was not convinced. So he did the logical thing – shot Sumner to death and filed for divorce. Why, under the circumstances, Mrs. Dalton contested the divorce is not clear, perhaps money, though she sadly remarks (through her lawyers) the relationship with Sumner “poisoned the once affectionate heart of her husband, and has turned him away from his still tender and loving wife.” But for the murder, this reminds me terribly of Kristen Stewart. The jury deadlocked, though favoring Mr. Dalton 10-2, and in a separate trial for the killing, he was sentenced to a whole 5 months in jail. Obviously the jury was a bit sympathetic to his situation. $200.


In 1832, the last serious attempts were made in the South to find a way to end slavery voluntarily. The site for such proposals was Virginia. The Nat Turner rebellion had scared many half to death, and there were also many Virginians who at least were uncomfortable with slavery from a moral perspective. Thomas Jefferson Randolph, grandson of his namesake president, proposed a gradual elimination, whereby children born of slaves after 1840 would be freed upon majority. It received serious consideration, but ultimately was rejected. There was never another such moment in the South until emancipation was forced on it during the Civil War. Item 101 is The Speech of William H. Brodnax, (of Dinwiddie) in the House of Delegates of Virginia, on the Policy of the State with Respect to Its Colored Population (1832). It reflects the mixed emotions some felt at the time. Says Bordnax, slavery is a “transcendant evil...a mildew which has blighted in its course every region it has touched, since the creation of the world...the incubus which paralyzes [Virginia's] energies and retards her every effort at advancement.” You would think Brodnax to be a sure vote for Randolph's proposal. Not at all. Brodnax had equally strong words on the other side, saying the proposal “would subvert principles which have been consecrated by the wisdom of ages, and break down every barrier with which our constitution and laws have fenced the security of private property.” Private property trumps freedom. Brodnax joined the successful opposition in voting “no,” leaving it to war to resolve the issue. $1,000. Lesser offers copies of the speeches of several other delegates as well.