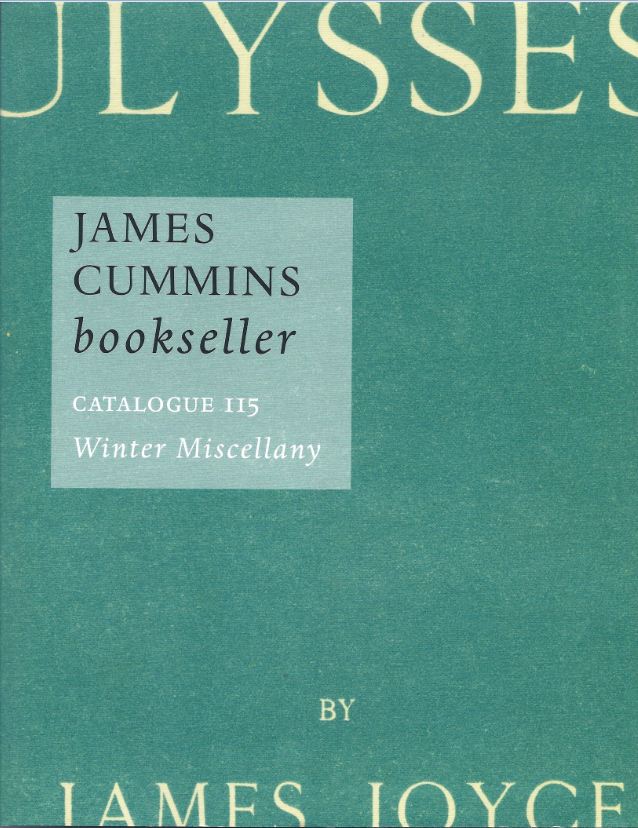 James Cummins Bookseller has released Catalogue 115, Winter Miscellany. There's not much one can say about a miscellany other than it is a miscellany, but we will add this is a very good one. The material is interesting, often important, and in top condition. It is a collector's miscellany. Here is a look inside.

We will start with a very old text, Catechismus, ex decreto Concilii Tridentini, from 1566. It is the Catechism arising from the Council of Trent in the mid-16th century, the Catholic Church's answer to the Protestant Reformation. The catechism was prepared to instruct the clergy in the doctrines of the Church. It was felt, at the time, that many were woefully ignorant of what it was they were teaching others. These teachings were evidently built to last, as it would remain the Church's authoritative catechism for over 400 years. Item 13. $20,000.


This one is going to generate all kinds of cruel and undeserved jokes, but here we go: Newark Parlor Album of Distinguished Jerseymen, Art and Architecture. No, Snooki isn't one of the “distinguished” Jerseymen (or women). It was published in 1879-1880, long before she graced this earth. But, it does include Thomas Edison. Take that, all of you Jersey bashers. There have been few in history who could match the inventive genius of this Jerseyite. Then there is General Kearney, who fought the Indians out west, along with Benedict Prieth, Chancellor Runyon, Frederick L. Lehlbach, Rev. Jonathan Forrester, George C. Ludlow and others. Never heard of any of them, but hey, did I mention Thomas Edison was from New Jersey? This collection of photographs was published by the photographer, Emil P. Spahn, in 12 parts, with both English and German language editions. This one is a mix – 1-4 in English, 5-12 in German. Item 29. $1,750.


There are many works of art in this catalog, and this certainly is one, though not of art in the sense of great paintings and literature. Item 6 is Nicolas-François Blondel's L'Art de Jetter les Bombes, or the art of throwing bombs. That is an art form too, though a destructive, rather than creative one. Blondel was a mathematician, architect, engineer, diplomat, and teacher. A veritable renaissance man during the Renaissance was he. While in the military, Blondel noticed that bombardments made by his troops tended not to hit their targets, so he devised practical mathematical rules for aiming them in the right direction. Though he devised the rules in 1677, they were not printed until 1683. It was delayed by King Louis XIV who was not too keen on instructing his enemies on better targeting. Apparently, French gunners didn't use his advice until many years later either. Offered is a sixth edition of Blondel's work, published in 1699. $2,000.


Item 48 is a wild signed contract between Michael Philip Jagger and writers Christopher Gibbs and Nigel Mesmoir-Gordon. For those not familiar with Michael Philip Jagger, most people know him simply as “Mick.” Jagger signed up the writers to create a filmscript for a rendition of Sir Gawain and The Green Knight, in which he was to play the Knight. High on his success, or something else, Jagger wanted to expand his repertoire beyond music in 1967, clearly a mistake. Stick to what you do well. Accompanying the contract is a 16-page script for The Story of Venus and the Quest for King Arthur's Kingdom. Don't look for this film at a theater, or even on a classic movie channel. It never came to pass. $4,500.